The Muscular System And The Different Fibre Types

Antagonistic Pairs are a pair of muscles working together to allow coordinated movement of the skeletal joints. Muscles can only exert a force and do work by contracting. An example is the antagonistic pair of muscles used in bending and straightening the arm.

Don't use plagiarized sources.
Get Your Custom Essay on The Muscular System And The Different Fibre Types Just from $13,9/Page

To bend the arm requires the biceps to contract, while the triceps relax. If the arm is to be straightened, the reverse happens. The individual components of antagonistic pairs can be classified into extensors and flexors. An example of this in sport is bending the leg to strike the ball in football, the agonist is the rectus femoris and the antagonist is the bicep femoris.

Muscles can also be fixators, or stabilisers. These muscles hold or fix joints in a stable position.

In a bicep curl the trapezius is the fixator as it holds the shoulder joint stable as the bicep contracts.

Muscles that assist the prime mover in a movement are called synergists. When the elbow joint is flexed the brachialis and brachioradialis are the synergists as they assist the bicep in the movement.

Movement happens when the muscle shortens generating force. An example of a concentric contraction is the upward motion in a bicep curl or when bringing back the lower leg before kicking a football.

This is when the muscle generates force without moving regardless of the load, for example when gripping a weight the muscles of the hand and wrist contract. Also in arm wrestling, the two contestants push against each others arms. This is an isometric contraction.

These are the smallest of the muscle fibres. These will be red in colour as they have a good blood supply and will also have a dense network of blood vessels. They also contain many mitochondria to make them more efficient at producing energy using oxygen. They contract slowly and also fatigue slowly suiting them best to aerobic endurance activities such as the 10,000m. These fibres are most effective during the middle part of the race when the athlete has found a constant speed, allowing the muscles to work for longer, as they are not being over-exerted. This is because they give there energy over a long period of time allowing the athlete to run for a sustained period of time.

They are also slow to fatigue because they have an incredibly high aerobic capacity, meaning the athlete will be able to run long distances without feeling tired. To be able run a long distances, the athlete will need to have a lot of type 1 fibres in their leg muscles, mainly the gastrocnemius, rectus femoris and bicep femoris. Long distance runners will have a very high amount of slow twitch fibres in their muscles, making them more resistant to fatigue.

These fibres use both aerobic and anaerobic pathways almost equally to create energy. They contract rapidly, are twice as thick as type 1 fibres and are quick to fatigue. They have a poor blood supply, are whiter in appearance, due to the lack of oxygen. Type 2a fibres are best suited to team sport activities, or sports that are too long to be type 2b fibres and too short to be type 1 fibres, for example sports like the 400m. An example of when the fibres will be working the most is probably the last 100 metres when the athlete is trying to build up more speed. This means the fibres have to work harder in order for the legs to move faster so they can pick up speed.

These types of fibres have both medium aerobic and anaerobic capacity, making them ideal for this type of event. They are less resistant to fatigue than type 1 fibres, but are more resistant than type 2b fibres, again making them perfect for the 400m, lasting just long enough for the race. The 400m also requires a good anaerobic capacity for the final 100m and these fibres provide a good level of capacity, making it great for this type of event. Type 2a fibres give a mixture of slow and fast muscle contractions, making this useful in team sports like football as the pace of the game is constantly changing.

These are the fastest contracting of the three fibre types. These fibres use aerobic metabolism to create energy. As they are the fastest contracting they are also the fastest to fatigue. Type 2b fibres are best suited to explosive sports such as 100m. A moment in the race where these fibres are used effectively is right at the start. As the athlete explodes away from the starting blocks and begins to build up speed, the fibres have to work hard to get the power to the muscles. These muscle fibres are used when the athlete flexes the muscles in his hamstring and quadriceps when they bend their leg, mainly the bicep femoris and rectus femoris, are contracting causing the fast twitch fibres to work very hard, especially due to the lack of oxygen.

Athletes who compete in these tend to have more type 2b fibres than any other type of fibres, which means they have a high anaerobic capacity, meaning the lack of oxygen is a problem to these particular fibres. However when competing some athletes pull up with hamstring injuries due to the lack of oxygen going to the muscles. This occurs in the type 1 twitch fibres, which have a low anaerobic capacity, causing tears in these areas of the bicep femoris. The fibres give a lot of energy over a short period of time allowing the athlete to sprint at maximum speed.

The Muscular System And The Different Fibre Types. (2016, Apr 07). Retrieved from https://studymoose.com/muscular-system-and-the-different-fibre-types-essay 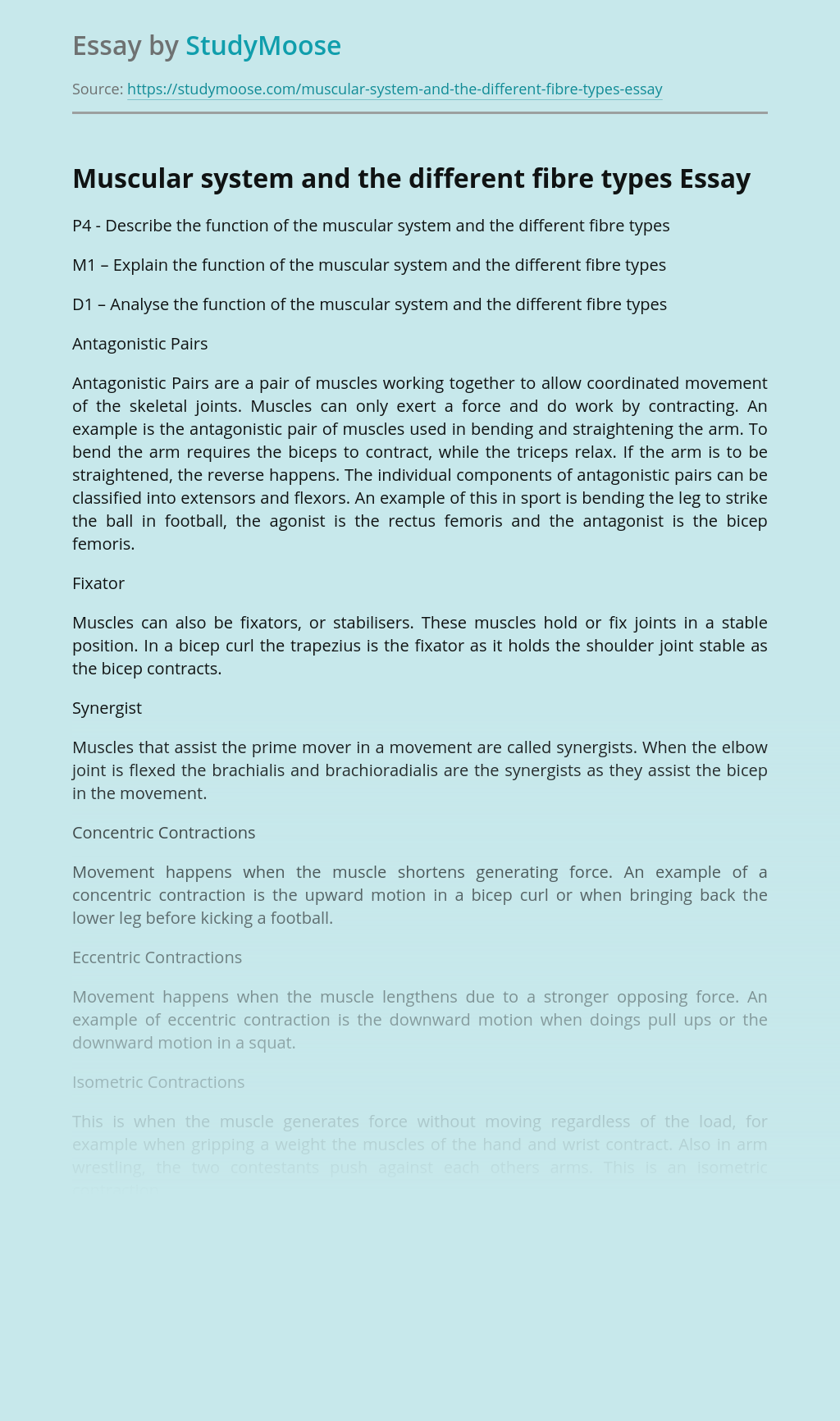 The German Blitzkrieg in Poland

Below are the stunning figures in casualties on the both sides as a result of Germany’s invasion of Poland. The German armies, with their Blitzkrieg Strategy (meaning given above) had been extraordinarily successful in the first three years of their advance. After the fall of Poland Adolph Hitler halted in the hope that the Western...

Intro: In this lesson, 2nd grade trainees will get involved in a class on the life cycle of a butterfly. Trainees will learn standards-aligned science concepts and also advantage from cross-curricular guideline, through the incorporation of reading, composing, and hands-on activities. These methods will be utilized to assist trainees comprehend the concept of the life...

Get Essay
Causes and Consequences of Hitler becoming Fuhrer

The inauguration of Hitler as Fuhrer in 1934 sparked a change in the German state as Hitler was able to put his ideals into action, bringing tragedy and destruction to the world once again. A springboard for Hitler’s rise to power was created by the Weakness of the Weimar Government, coupled with the conditions created...

It came up with the rudiments of a bill for the establishment of a central bank for the country after a careful study of the economic provisions of the Hare-Hawes Cutting bill, the Philippine independence bill approved by the US Congress. During the Commonwealth period (1935-1941), the discussion about a Philippine central bank that would...

Lionel Messi was a small town kid. His family was poor and all of them played soccer except for his mom and his sister. When he was 1 year old he got a soccer ball and a soccer shirt as a gift. According to the website www.fcbarcelona.org Lionel Messi was born in Rosario, Argentina is...