Multiple Governments and Intergovernmental Relationships
To be successful as a unified or United States, meaning a group with the same but often times different agendas, a few things had to become true. First the individual governments of these states had to feel that their best interests were represented within the united whole. Second that their powers within their borders would not be encroached upon too much, and lastly that the benefits of an overarching federal government would outweigh any loss they experienced.

Don't use plagiarized sources. Get your custom essay on
“ Multiple Governments and Intergovernmental Relationships ”
Get custom paper
NEW! smart matching with writer

Hurricane Katrina hit the golf coast on Monday August 29 2005, the eye of the storm hitting Sothern Louisiana, between New Orleans, and Gulfport Mississippi. This storm cause severer damage all along the cost, destroying homes, roads, and bridges as far as 12 miles in land (“Hurricane Katrina”, 2013). This author lived in northern Mississippi, a five-hour drive from the gulf coast, and lost power for days, as well as severe damage to his home, and the loss of seven 100+ year old trees.

The worst damage though was within New Orleans Louisiana, where most of the city is below sea level and protected by an intercut system of levees, and sea walls. These levees broke and flooded most of the city, mixing with raw sewage and underground gasoline stores making a lethal cocktail, not fit for human habitation. As a result of this and a lack of proper cooperation within our government many people died.

In a catastrophe this large, no one-government entity can handle the issues alone. There must be cooperation at all levels of government. The local communities, which are affected probably, do not have any government infrastructure or resources to deal with the event. Next, the states are not necessarily equipped to handle these events. This would require stockpiles of resources just waiting for an event like this to take place. The Good

The federal government and state governments knew this was going to be a hard storm, but must felt that it would not be any worse than the hundreds of hurricanes, which have hit the area prior. Still, the local communities prepared in the same way as before, issuing evacuation warnings, prepositioning National Guard, water and food around the suspected areas. The federal government also prepositioned the coastguard, and other resources around the affected area. These would have been efficient for a normal hurricane, but not for what happened (“Hurricane Katrina”, 2013). The Bad

Unfortunately, the events that took place, with the gulf coast, the water surge, and the levees breaking in New Orleans were not predicted. The flooding made most of the region un-passable by normal modes of transportation. It took supplies, and resources far too long to reach the injured, and others in need. This was only compounded by poor decision-making and political finger pointing on the part of many and unfortunately, this resulted in further lost lives, and more injuries. How Could It Have Been Done Differently

This is one of those difficult questions. Of course, hindsight is always twenty-twenty, but there is no reason, considering how chaotic something like a hurricane can be that any possible catastrophe should be ruled out. Before the Hurricane, officials actually stated that there was no way the levee system could be breached by the sea. This shows that there was a concern about it prior to the storm, yet it was ruled out as a possibility. Contingency planning was a failure here. There should be a contingency plan for anything no matter how possible. For example, the space shuttle had no less than 100 emergency landing sites throughout the world. This contingency plan did not have one plan with a backup plan it had a contingency plan and each contingency plan had another. No possible eventuality should ever be foolishly ruled out.

The contingency plan for the hurricane should of included supplies, personnel, and equipment stationed inside the hurricane zone, in case there
was difficulty getting into the area, which it was. Agencies such as FEMA, should have moved resources in, and protected them for the storm as opposed to station it on the outside of the area, and expecting an ability to move it in. Stationing the supplies and help outside the area shows that our government was hoping for a best-case scenario when they should have planned for the worst. 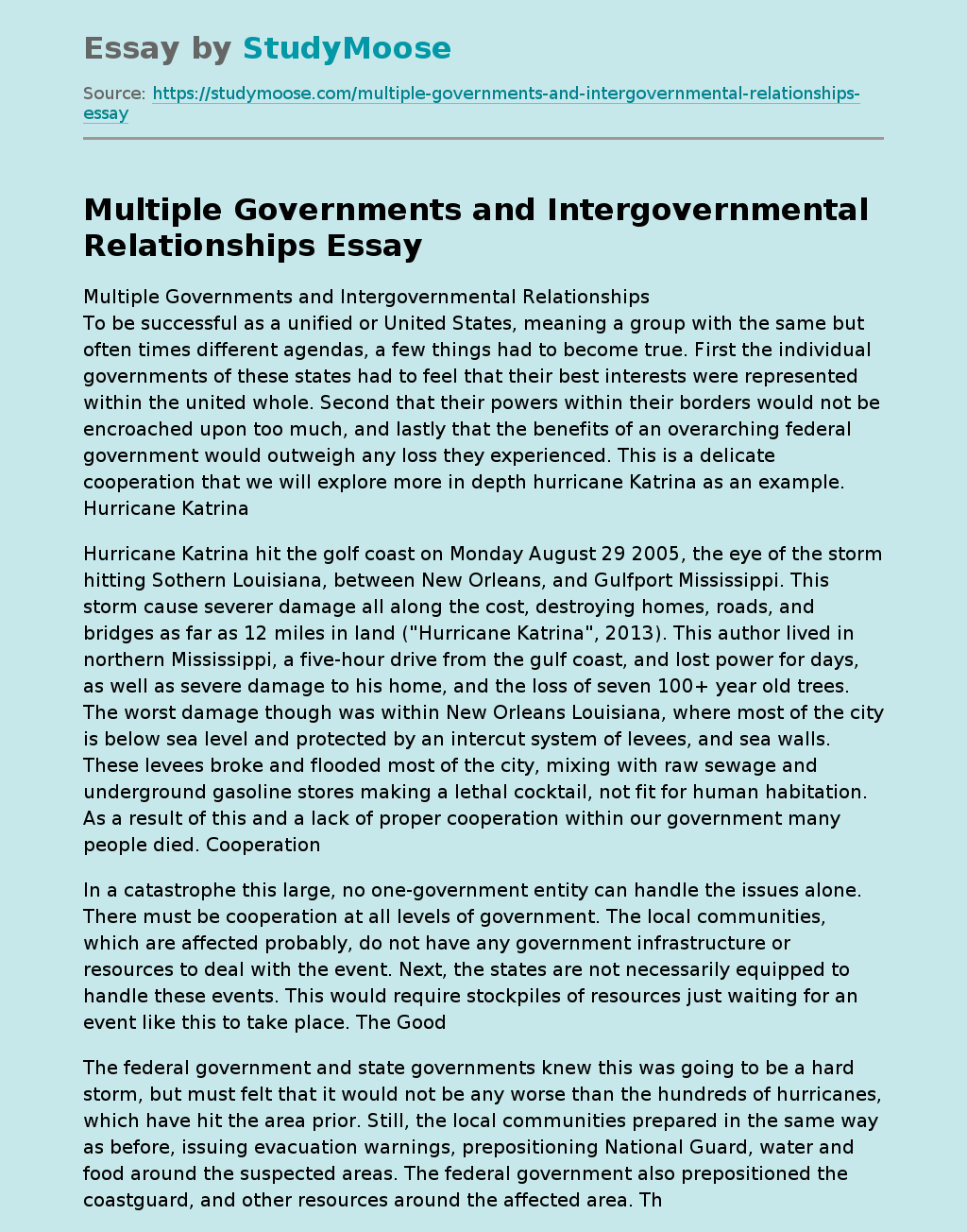