In the long years of educating children, the school and the curriculum designed to use Filipino and English as a medium of instruction. Although English is a foreign language, we use it to serve as our language especially communicating and expressing ideas. By using it, we are being globally competitive that we can align in other countries. And to show also that we are not behind among the competitive countries worldwide in the field of education. Filipinos were considered smart and flexible as we can easily learn foreign language.

Don't use plagiarized sources.
Get Your Custom Essay on Multilingual Education Just from $13,9/Page

However in the long time of using it, not all may have the skill to understand and speak it.

Those other children could not express their ideas freely because they find it difficult. Sometimes it leads them to have a low self-esteem. One of the changes in Basic Education Curriculum brought about by the new K-12 program is the introduction of Mother Tongue- Based Multilingual Education (MTB-MLE) specifically in Kindergarten, Grades 1, 2 and 3 to support the goal of “ Every Child- A- Reader and A –Writer” by Grade 1.

” Multilingual Education typically refers to “first-language-first” education that is, schooling which begins in the mother tongue and transitions to additional languages.

It is meant to address the high functional illiteracy of Filipinos where language plays a significant factor. Every area has different lingua franca, the most common language in an area. Mother tongue means we are using the language in our community. The language you already heard and used by the people around. It’s the language that was used in daily conversation with the family and neighborhood. We use our own dialect as we say. During kindergarten and Grade One the child starts to learn how to read. During this stage, they struggle to learn reading. Not all are fast learners; some are poor because they could hardly recognize words especially in English. In this stage they need follow up in school and at home. Many children are found to be poor-readers and having difficulty to comprehend stories and paragraph. That is the common problem in school. A child who suffers this situation became passive and doesn’t want to go to school anymore.

When the teacher is having a discussion, a child will not participate and afraid to commit mistakes in answering because they don’t know how to express their answer. The mother tongue was implemented because many children are not comfortable using foreign language as medium of instruction. A child could not express an idea if it is in English because other children find difficulty to use it. Mother Tongue will serve as a foundation to learn Filipino and English easily. Starting kindergarten, the children will use mother tongue. They will learn their lesson using stories, poems, illustrations based on their local culture. Learning will be continuous to the child as they use their own language. They will express ideas freely and have confidence within themselves. It is easy for them to construct sentences, make paragraphs as they identify the terms use. Easy to converse and recite because the words use are familiar and they use it every day.

They would count numbers, sing songs, recite poems in the language use in the community. Understanding occurs instantly in them. Studies show that students learn better when taught in their native language than in a foreign tongue. Through the use of the mother tongue, it will develop their reasoning skills and higher thinking skills of the students. Pupils can easily express their different views and ideas during class discussion. Further, students will understand their lessons better; at the same time infuse a sense of nationalism and they will also gain fluency in their L1. MTB-MLE benefit pupils because they easily understand their lessons and the learning skills of students can be easily achieved. The objective in lessons of the teachers can be achieved as pupils comprehend well. They can understand what the teacher is talking in front. They can give examples and interact well in discussion. Their self-esteem develops and confident to deal with the lessons.

It is easy to the teacher to establish rapport among her pupils. We are also promoting nationalism because we use the native language rather than the foreign language. If there are benefits we get from this, there are also disadvantages. The implementation of MTB-MLE will demand more time to translate books into different dialects knowing that Tagalog is not the only dialect that Filipino people speak. In different areas in the Philippines, we use different dialects so it will take more time to study and translate it to our own dialect. I find it difficult to other pupils who are transferee .If they come from a school where they had different language use, they will find it hard because they need to adapt and study the dialect of that particular area in order to communicate. It will create confusion also on the side of the child due to different terms use.

Example if a child came from Cebu then transferred to Iloilo. Cebuano’s language is different to Hiligaynon. So a child does not know the words to speak or might his/her classmates laugh at him/her. Maybe the child can speak words that had different interpretations to that certain place and could create misinterpretation. And also in Iloilo we have different languages use in every town. We have different versions of Hiligaynon. And every word has different meanings. It would cause misinterpretations and confusions. Because some words are easy but other words are very difficult to understand even it is in Mother Tongue. It is also difficult for those who are comfortable using English as their medium of instruction. They are used to speak and use English well so they could not comprehend well in the Mother Tongue.

They become confuse what are the exact words to use when it is translated in Mother Tongue. And some pupils who studied their kindergarten from private schools whose instruction is on English will find difficulty interpreting the translation of the subjects in Hiligaynon because they are not used by it. Sometimes they could not get the instructions well. Their performances were affected of this language acquisition. Another problem with Mother Tongue is when children already familiarized with it, they will be poor in speaking English. They will less prioritize the use of it. They would only stick to mother tongue because it’s the only easiest language for them in order to communicate.

Hope that all the programs that were implemented will pave way to an improved and quality education no matter what language should be use as an instruction. And all children will be given equal opportunity to avail the quality of education that the government offers. That will help to lessen non-readers and poor readers of the country. That Mother tongue will make the lessons easy for every child in recognizing and comprehend to lessons and stories. That they will learn to express their ideas well and eliminate illiteracy and become fast readers in the future. 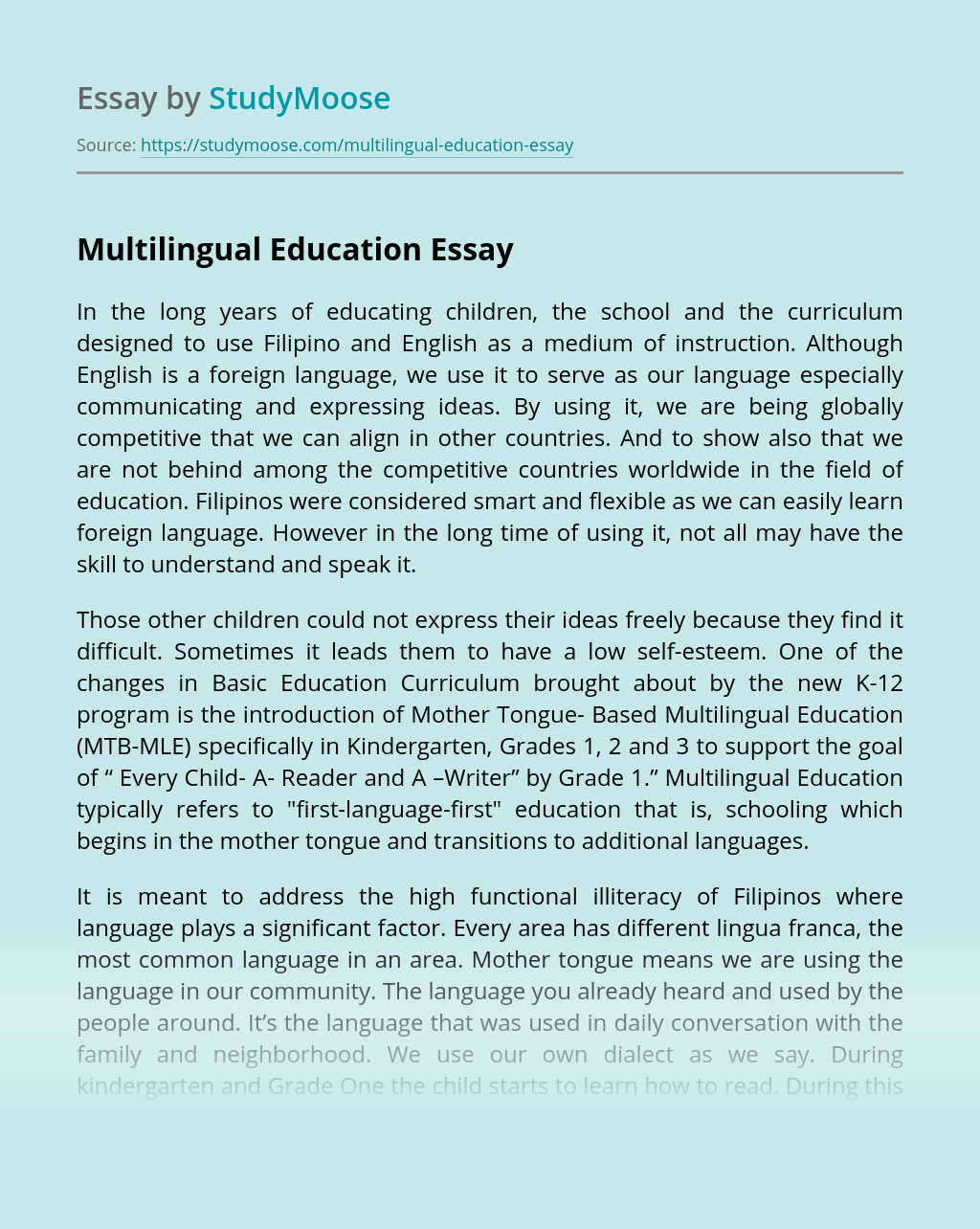 Lack of values in today's society

In the last years, we have been facing the lack of values in the society and in human relationships. We consider as ” value ” the degree of importance, significance or meaning that objects acquire, the actions, the situations or positions, to the extent that respond to the needs of the species and the human... VIEW ESSAY

A house with five or more sleeping rooms where boarders are provided with lodging, and meals for a fixed sum paid by the month, or week, in accordance with previous arrangement. Infrastructure guidelines for boarding facilities These guidelines refer to the provision of the necessary spaces, facilities and equipment required to make the environment conducive... VIEW ESSAY

View sample
Get Essay
The importance of sensorial education

Maria Montessori further breaks down the five senses into nine isolated senses, each addressed in her sensorial curriculum. Explain the importance of sensorial education and briefly discuss the exercises for the education of all the senses. “ The aim of the sensorial exercises is not that the child shall know colors, form and the different... VIEW ESSAY

View sample
The importance of sports in child's development

Children need to be active every day. Physical activity promotes growth and causes enhanced physical and emotional health. Today, research shows that the significance of exercise in kids is more powerful than ever. For instance, medical scientists have observed that extremely active kids are less most likely to struggle with high blood pressure, diabetes, cancer... VIEW ESSAY