There is a huge competition between MTV Networks Asia and Channel V over the Asian market. These two companies that have invested heavily in the region thus, increasing their distribution networks all over the Asia continent. In 1999 the tough completion degenerated into a personal war of words between the heads of each channel. They alleged each other of misrepresenting viewer figures. So far, Channel V has lower operating costs and is set to recover the investments they made in the region very soon.

Don't use plagiarized sources. Get your custom essay on
“ MTV Case Analysis ”
Get custom paper
NEW! smart matching with writer

On the other hand, MTV appears to be having an upper hand in terms of attracting and retaining advertisers. SWOT Analysis MTV strengths lies in its structuring, it is based on three divisions MTV India, MTV Mandarin that broadcasts to Hong Kong, Mainland China and Taiwan and MTV Asia that covers Indonesia, The Philippines and Singapore. All the three divisions rely on a 24 hour mix of partnerships with local stations and satellite transmission to distribute their products. On the other hand Channel V continues to enjoy lower operating costs.

One major weakness that both companies are faced with is cultural differences, distinctive broadcasting regulations and overlap of linguistic difficulties. Opportunities of both companies are increased by economic incentives to generate a product mix that will increase the number of advertisers as well as using an assortment of media to circumvent the technological and regulatory entry challenges. However, there are a number of threats in the business environment such as decreasing unionization, increasing diversity, aging, and globalization.

Additionally, more and more people are choosing to eat out at restaurants.

Strategic Analysis The current strategy for MTV is to tap into markets both India and China as well as increase its online presence. The mission of the strategy is to disseminate MTV’s brand name, generate revenue, research tool for clan data as well to deliver its programming in future. With this strategy the company is following its mission and vision through the following characteristics.

It is cost effective since its much more cheaper compared to other forms of branding such as billboards. The MTV management team has some confidential information that is released when it is needed so as to protect the company from its competitors. In additions the objectives are specific and there is a well outline risk management plan. MTV can easily keep abreast of consumers’ changing tastes through the instantatious nature of internet that gives visitors a chance to fill out a simple survey upon visiting MTV’s website.

It is a fact that in late 1999 a Chinese language version of MTV’s site due to increase in the usage of the language over the internet. The strategy fits the business environment so well since there is rapid internet growth in Asia. There has been no mismatch and the company is not losing its focus. There are more chances of expanding and making more profits as the strategy is being implemented. The basic strategy is diversification strategy with MTV meeting its fans online whenever they are using internet.

Strategic Evaluation As a company MTV is doing well since the operation costs of branding, marketing and research have reduced greatly. In May 1999, MTV Asia Online was able to host its first webcast live from MTV Billboard Asian Music Conference closing party. Strategic Recommendation The strategic recommendation I would make for the company is that they should develop an online site for each of the divissions mentioned earleier in this review so as to have specialized programming for each region other than having one site for the entire Asia market. 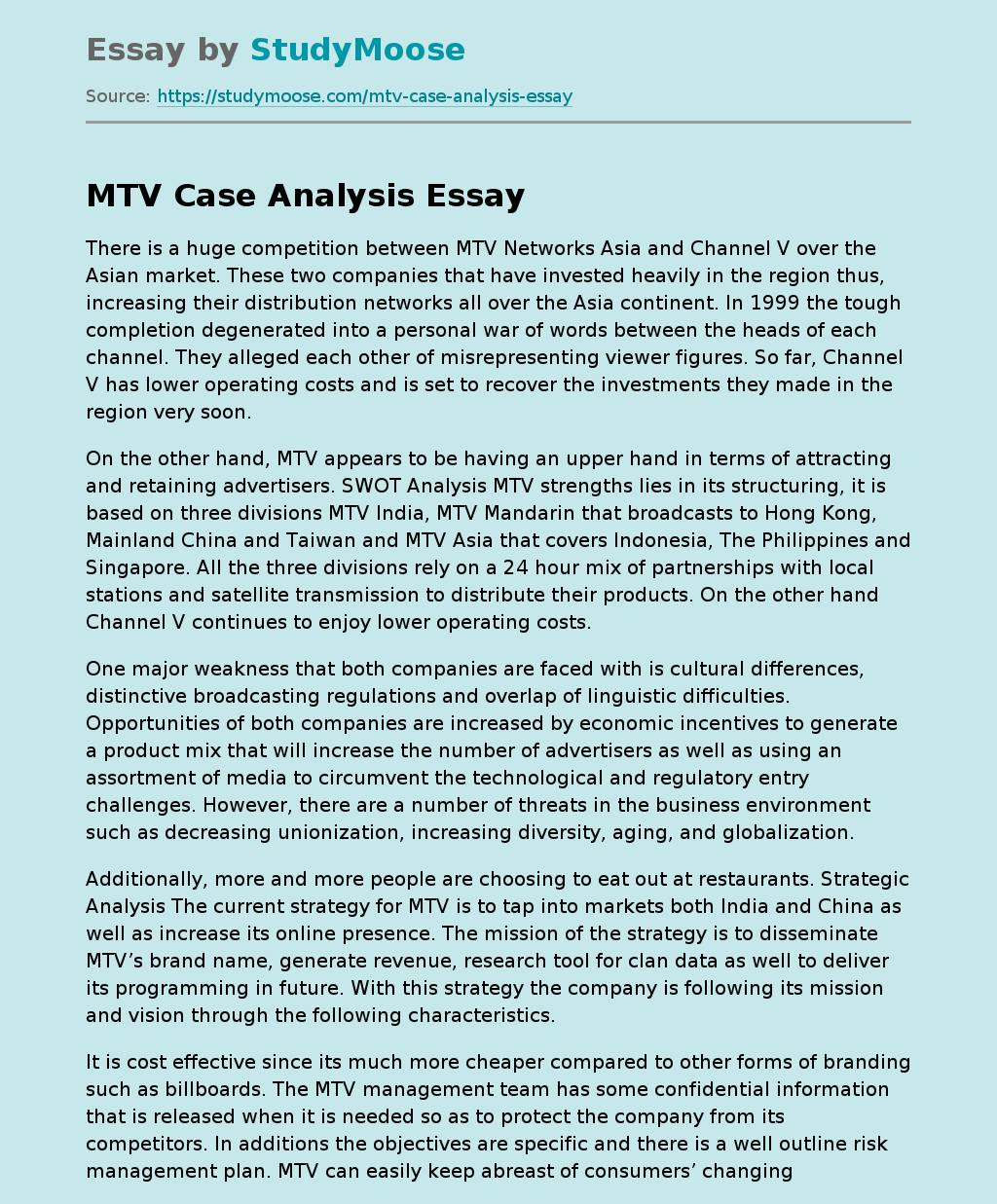