Gertrude Morel, a mother whose possessive love for her sons hinders their ability to establish fulfilling relationships with other women, and her detest of her husband closes him out of their lives. Gertrude can not bear to see her children live the life that her husband Walter does so she makes sure that they detest him, especially William and Paul. Mrs Morel did ruin three lives in this novel, Walter’s, William’s, and Paul’s.

Walter was a simple miner with simple needs and no motivation or want to advance, when he and Gertrude first met he had thick flowing black hair and a full beard and he also laughed a lot suggesting a happy, relaxed figure.

He also portrayed himself as bold and a senior in the mines making a good stable wage, owning his own house and everything in it as well. Gertrude finds her self strangely attracted, despite being described as “opposite” to her new found love.

They rush into marriage but the lust that they had soon fades as the lies that were told are uncovered. Gertrude starts to despise the man she married because he lied to her and goes and spends the money he makes on alcohol instead of on his family. When William is born Gertrude smothers him in love and tries her hardest to keep him away from her husband which makes Walter jealous and angry with her that he can not have the same connection with the child that she does.

Gertrude does this with all the children that she and Walter have.

The eldest boys are so enveloped by their mother that they can not hold a stable relationship when they grow older because their mother wants to keep them for herself, “..William and Paul Morel are unable to love when they come to manhood, because their dominant mother holds them back, so that a split occurs between body and soul – their sweethearts getting the former; their mother getting the latter; while the boys themselves are shattered; inwardly in the course of the struggle.” (Spilka, 51)

William is the first born son and so he in the one that Gertrude idolizes, he is perfect to her and she wants him to be her little boy forever. When he grows older William soon gets a job in London and moves away leaving his mother and family behind. William send his mother a letter telling her about his new job and his new found girl-friend whom he will be engaged to. William and his betrothed come to visit his family at Christmas, they seem less than impressed with her and her lifestyle especially Gertrude because she treats his family as though they are somehow inferior to her. This does not discourage William to stop loving her. William becomes sick of her when they return to see his family on a vacation, his mother has the same feelings toward her, but he refuses to call off the marriage seeing how far they had come.

Later in the year William dies of pneumonia with his mother by his side. Paul is a less important to his mother until William dies, then he becomes her favourite. Paul is more frail than his brother was, and he is very artistic rather than athletic. As Paul grows in sight of his mother her love for him grows stronger because of his stature, and he grows in a way that he cares of what other people feel, especially his mother. He develops an Oedipus Complex towards his mother. “Oedipus complex makes mother a lover of her son. During childhood it seems normal and acceptable but it is abnormal and almost absurd, when he grows up, to keep such feelings. He will surely have no real love for a woman and no marriage in his life and is doomed to have a tragic ending with his love affairs and to suffer spiritually the rest of his life when his mother is gone.” (Wang)

When Paul is older he starts a relationship with a woman named Miriam who wants him to love her as she loves him, she wants his soul, for him to love her with every ounce of his being as she does. Gertrude see’s this and feels threatened by her because Paul’s soul should belong to her, she believes Miriam can have him physical but not spiritually. Gertrude confronts her son about this matter and Paul tells her that he does not love Miriam, that he loves only his mother and no one else.

When Paul breaks things of with Miriam and starts a relationship with Clara, Gertrude is content with them together because Clara is only interested in a physical relationship. When the relationship with Clara fades Miriam tries her luck with Paul again, she says that she wants to marry him but Paul is so fixated with his love for his mother that when he feels the slightest feelings for Miriam he feels as though he is betraying her. He declines the proposal from Miriam and goes back to his mother.

Gertrude Morel was a strong woman and mother but stubborn with her children in a way that she would want them to only look to her and not to walter, no matter what the situation was. Throughout the novel Gertrude ruins three lives, that of her her husbands, and her two eldest sons. Her husband Walter was not the best man for her but he did try to be a father to his children, but his wife made it almost impossible for him to do so.

He is ostracized from the family throughout the novel, his life is ruined because Gertrude made him loose the only family he had before he had a chance of being a part of it. Her eldest son and first born child William, is so fixated on his mothers approval that he learns to hate the woman that he will be married to, that marriage would become like his parents. In that way Williams life is ruined by his own mother. Her third child and second son Paul can not have a stable relationship with women because he loves his mother too much, his life is ruined because once his mother is gone he is left with nothing and still can not hold a relationship together. 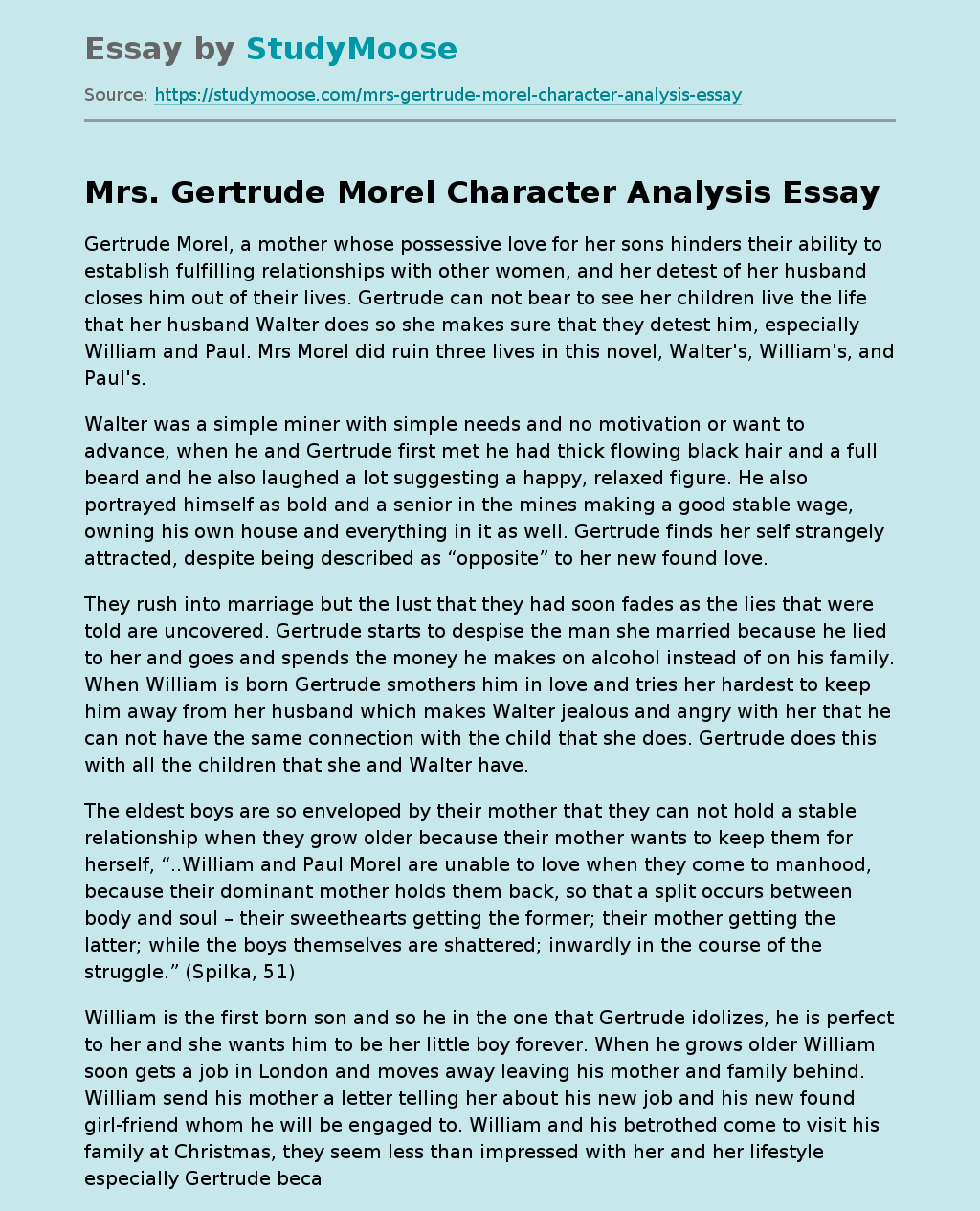