Movie "The Blind Side"

I have selected the movie; “The Blind Side”, it is the true story of Michael Oher, a homeless teenager who was able to overcome great obstacles in order to become a first round draft pick in the NFL. Michael Oher had a rough childhood as he didn’t know his father and his mother was addicted to drugs. He was in and out of foster homes and at times living on the street. The football coach at Wingate, a private school, saw football potential in Michael and got him admitted into the prestigious school.

Don't use plagiarized sources. Get your custom essay on
“ Movie “The Blind Side” ”
Get custom paper
NEW! smart matching with writer

However, he had learning disabilities and still did not have a permanent home. Leigh Anne Tuohy, the mother of a Wingate student, and wife of the owner of several Taco Bell restaurants, finds out about Michael’s predicament and invites him to stay the night at their home.

Once Michael is in the Tuohy home, a close relationship develops between him and the Tuohys. The one night stay turns into a permanent living situation for Oher.

Leigh Anne makes it her personal mission to make sure Michael has everything he needs emotionally and academically to graduate from high school and to get admitted to Ole Miss. After a successful college football campaign, Oher was drafted by the Baltimore Ravens in the first round in 2009, thus fulfilling his dream. This movie has it all. As you watch it, you experience the emotions of both sadness and joy, as you watch this young man go from being homeless to being drafted in the first round of the 2009 NFL draft.

Movie "The Blind Side". (2016, Nov 12). Retrieved from https://studymoose.com/movie-the-blind-side-essay 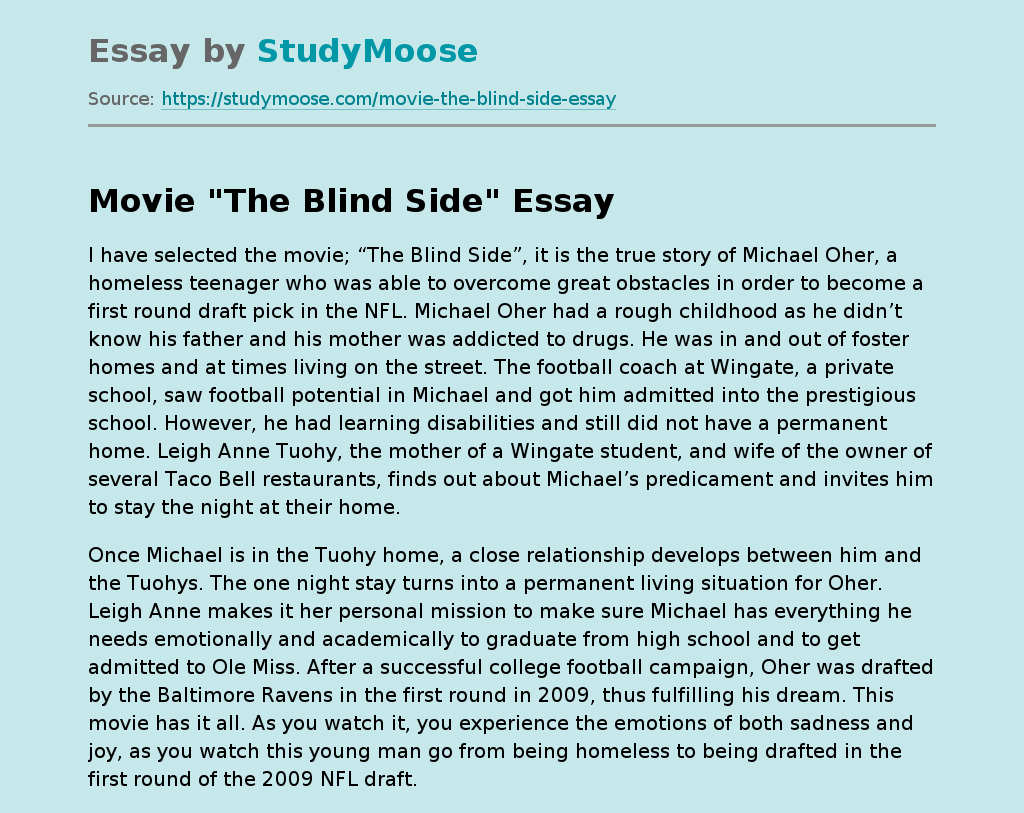