Tuesdays With Morrie is both a book and a movie. They are alike and different in so many different ways. The movie is never going to have as much detail as the book did, but they did a good job making the movie as close as possible to the book. The book covered a lot more aspects of the story than the movie did, and the book focused on the bigger more important parts.

There were a lot of main points that the book and movie were alike.

Don't use plagiarized sources.
Get Your Custom Essay on Movie and Book Comparison Just from $13,9/Page

In both Morrie dies the same way with the same people around him. At the beginning of this story Mitch is so consumed in his job that he doesn’t give any attention to anything else but his column. As the story progresses Morrie starts to lighten up on the job and work towards a relationship with Morrie. By having this relationship with Morrie helps his relationship back home with his girlfriend who is getting tired of Mitch not giving her the attention she deserves.

Janine and Morrie both play huge parts in Mitch’s life in both the movie and the book. The movie used a lot of the same lines used in the book such as Morrie’s aphorisms. One last thing that the book and movie had in common was that each time Mitch went to visit Morrie he could tell Morrie was getting worse and worse.

Some movies that are made from a book are most of the time completely different, but this movie resembled the book perfectly. The movie covered the most important parts of the book, which made it a success. 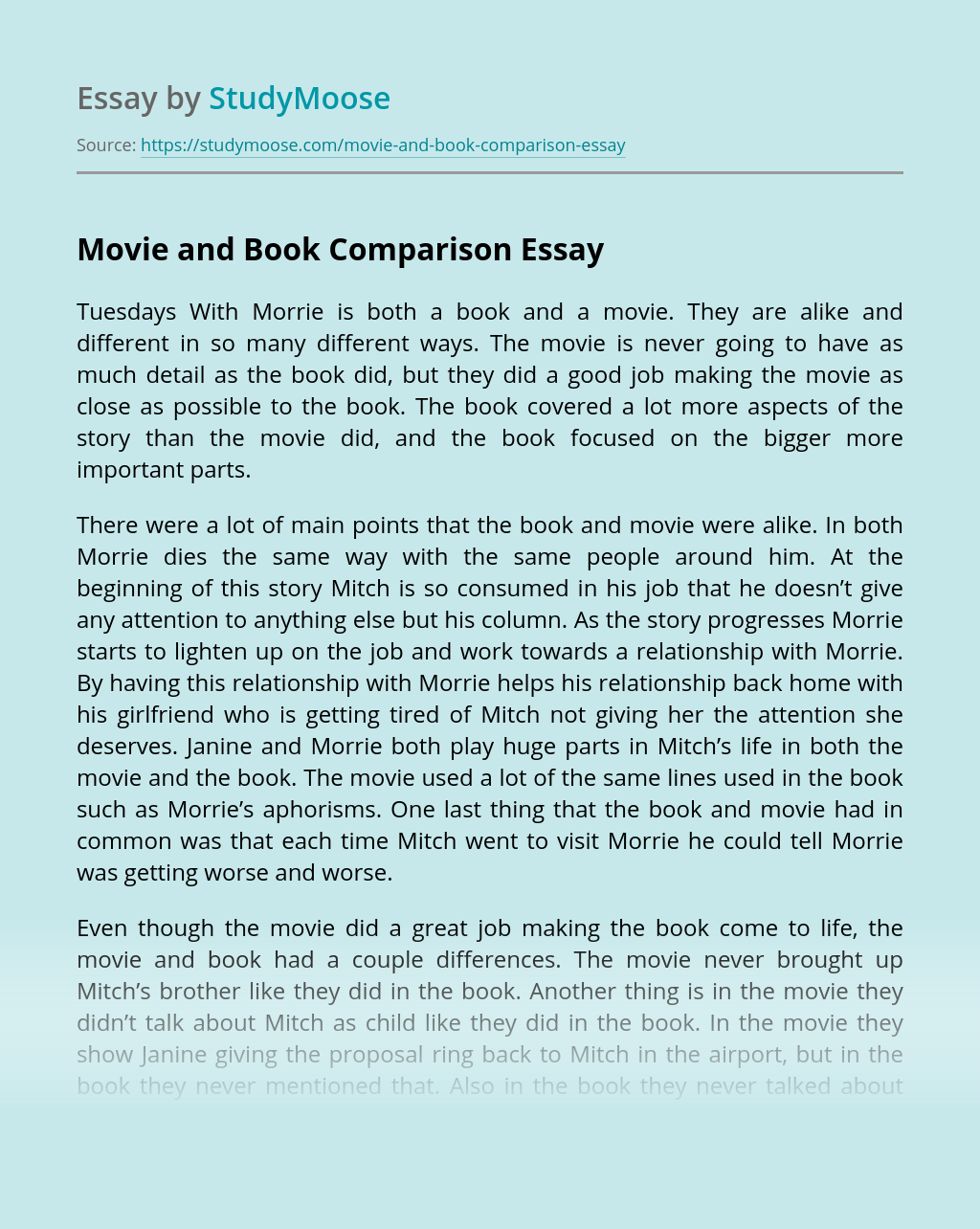 The Boy In The Striped Pyjamas is a story that was based around the time of the Holocaust. Throughout the novel, a series of events leads to a German boy making an unlikely friendship with a Hewish boy. Firstly, the ability of Bruno and Shmuel to support each other’s needs plays a significant role in...

View sample
“The Most Dangerous Game” And “The Child By Tiger”

View sample
Get Essay
The poems "My Papa's Waltz"/"Grape Sherbet"

Memories are not real. Although we try to cling to memories, they will never be revived. Both the themes in My Papas Waltz by Theodore Roethke, and Grape Sherbet by Rita Dove, share a similar idea along with the tone. However the poems are differ greatly in structural aspects. The theme of a poem creates...

There are two different types of people in the dessert world, the pie people and the cake people. These two desserts are both wonder in my world but there are lots of differences in these two similar after dinner treats. Pies are warm, baked, with a gooey filling of your choice. They have a hard...

All four poems that I read are related in their purposes and goals; however, they are also very different. “Lucinda Matlock” by Edward Lee Masters, “Chicago” by Carl Sandburg, “Richard Cory” by Edwin Arlington Robinson, and “We Wear the Mask” by Paul Laurence Dunbar are all about the joys and sorrows of life. How we...