An individual’s motivational reason for wanting to become a police officer does not really differ from person to person. According to a survey given to male and female officers asking what drove them towards a career in law enforcement, they all had similar responses. The majority of the answers these officers gave were the ability to help people, fight crime, have and exciting job, and job security. Contrary to belief, officers have little or no interest in joining just to cause harm or use excessive force on citizens.

Don't use plagiarized sources. Get your custom essay on
“ Motivations to become police officers ”
Get custom paper
NEW! smart matching with writer

One of the top reasons an individual wants to become a police officer is the high level of job security the job offers. Officers are rarely fired from their jobs because of the civil service rules and union contracts. If an officer faces termination from unjust reasons they are given the opportunity to appeal the situation and possibly save their job.

Perform the Internet Exercise on page 184. Answer the questions posed.

Out of the options given, I chose to look up NLPOA and IAWP. The NLPOA stands for National Latino Peace Officers Association. They represent Latin American officers in the police force. They work to promote equality and professionalism in law enforcement. The NLPOA works closely with communities to prove citizenship programs, mentor programs, elementary school reading programs and training programs for people interested in careers in law enforcement.

IAWP stands for International Association of Women Police. They represent women in law enforcement. Their mission is to strengthen, unite and raise the profile of women in criminal justice.

They vision women’s lives to be free from discrimination, that they are valued for their contribution, and treated with respect and dignity. They work towards embracing diversity and improving women’s ability to excel in the criminal justice field.

Describe the relationship between a police officer’s attitudes and behaviors.

The relationship between a police officer’s attitude and their behavior differs greatly. It is believed that officers who make raciest statements or any prejudice remarks will automatically treat those people different and use excessive force. This is not the case. Officers’ actions are strictly observed, and the way an officer acts during an arrest can make or break his case against the individual.

Motivations to become police officers. (2016, May 19). Retrieved from https://studymoose.com/motivations-to-become-police-officers-essay 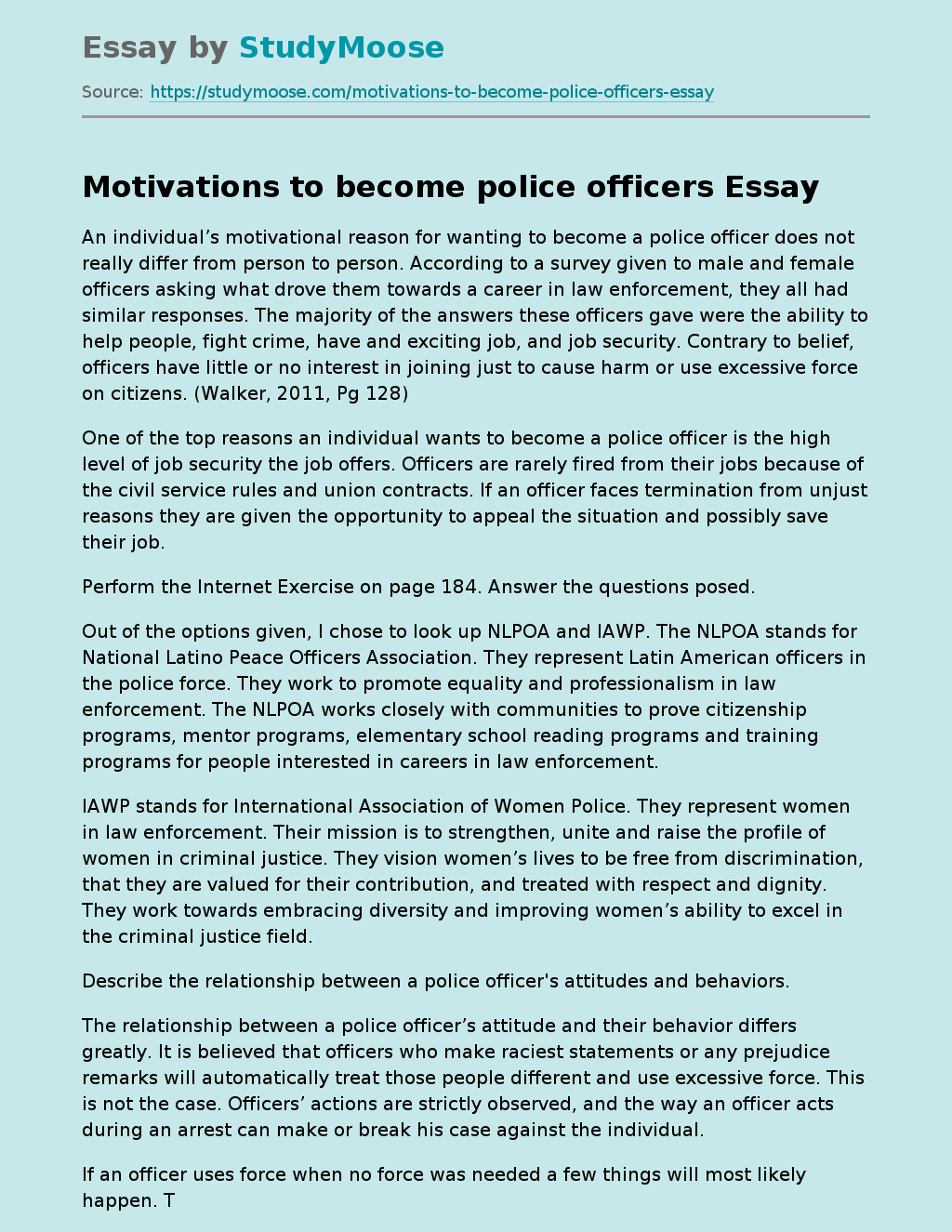