In order to argue whether “Disgrace” is an applicable title for JM Coetzee’s novel, the keyword “Disgrace” has to be defined. According to the Apple electronic dictionary disgrace is defined as a “Loss of reputation as the result of a dishonorable action”. In jm coetzees’s novel there are many characters and factors in their own right that are affected by some kind of misfortune or ignominy. However there are four characters / factors that play an important role in expressing ignominy from their actions and decisions.

Don't use plagiarized sources. Get your custom essay on
“ Most popular book by J.M. Coetzee’s – Disgrace ”
Get custom paper
NEW! smart matching with writer

These characters and their actions decides if the title is appropriate for coetzee’s novel. The characters and factors are : David Lurie, The new born democratic south africa, lucy lurie and her dogs. The protagonist of this novel is a professor who was constructively dismissed by a committee of lecturers from the university of cape town. David lurie was involved in many sexual relationships with many different women. However the affair that stood out the most was with one of his students named Melanie and this lead to him losing his job at the university and also shaming melanie.

This should have been an embarrassing moment at this point in his degrading life but still as edacious as he was he never got to learn his lesson, as its been said in the novel by david ,”No, I have not sought counseling nor do I intend to seek it. I am a grown man. I am not receptive to being counseled. I am beyond the reach of counseling.

” When life got too embarrassing for him in cape town because of his loss of reputation he moved to the eastern cape to live with his daughter.

It is there in george that he found the true meaning of what his life is worth. The situation with his daughter’s rape, the daily dealings with animals and dogs, his small sexual encounter with bev shaw, the visit to melanie’s parents, conversations with the shady petrus and the life of living in a new south Africa exhibited to him that his actions were disgraceful, his choices not thought out carefully and that whoever he came in contact with were either ashamed or disgraced. Lucy Lurie, the daughter of David lurie lived on a farm in the eastern cape.

She is the total opposite of David instead of being cunning and stylish, she is rather an earthly woman who works the soil for a living and who doesn’t care about her beauty and self image. The way in which she confronts david isn’t in a fatherly and daughterly manner but rather as two adults speaking to each other. This shows that lucy is disgusted at the way david is living his life and that david isn’t a fatherly figure in lucy’s life. Lucy does not disgrace herself like david but instead she lives in disgrace after she was involved in a situation where she was a victim of rape. he doesn’t overcome the shame of being victimized, because in the novel its been said by david : “She would rather hide her face, and he knows why. Because of the disgrace. Because of the shame. That is what their visitors have achieved; that is what they have done to this confident, modern young woman. ” (14. 22). Thus this quote shows she is living in ignominy. Lucy’s dogs also play an important role as it shows the physical suffering that plays out in the novel. The dogs change the way in which david approaches life when he has to put them down at the clinic.

In the novel David is attached to the dog with the crippled leg. Its here that he sees disgrace in not his actions but rather in death and he experiences shamefulness in not lucy’s situation but rather in the way the dog is forced to live. at the end of the novel instead of letting the crippled canine suffer he saves it for living a more disgraceful life than death. “There is a heavy report; blood and brains splatter the cage. For a moment the barking ceases. The man fires twice more.

One dog, shot through the chest, dies at once; another, with a gaping throat-wound, sits down heavily, flattens its ears, following with its gaze the movements of this being who does not even bother to administer a coup de grace. A hush falls. The remaining three dogs, with nowhere to hide, retreat to the back of the pen, milling about, whining softly. Taking his time between shots, the man picks them off. “(11. 91-92). The imagery of using dogs shows that everyone in the book is subjected to some kind of pain, suffering and a bit of disgrace whether its a human or an animal.

In this quote it is here that the dogs are subjected to the harshness of the attackers and david has to bare with the pain of hearing the dogs die, david also feels a bit of ignominy as he can’t do anything to save the dogs. In the novel south africa had just come out apartheid and was now a democratic government, however during apartheid south africa was a disgrace to the international community and apartheid was considered a shameful act. There was still racial tension in the new south africa and this plays an important role in the novel. When david moved to he country side he was not aware of the tension, and he and many other whites couldn’t speak the native language which was a fact as it can be seen from this quote from the novel: “He is sitting in the front room, watching soccer on television. The score is nil-all; neither team seems interested in winning. The commentary alternates between Sotho and Xhosa, languages of which he understands not a word. (9. 1-2)” His encounters with the blacks shows that the two races were not use to each other. Thus this shows that when theres segregation in a country it always leads to violence and disgraceful actions.

All four of these factors reflect that disgrace is definitely an appropriate title for JM coetzee’s novel. From david’s actions to lucy’s rape and from the physical suffering of dogs to the affects of apartheid expresses the loss of reputation and the dishonorable actions which has contributed to the novel. Disgrace is the ideal word for the title because disgrace touches every character of the novel in some way, both through the ways they have affected others and also through the ways that others have affected them. 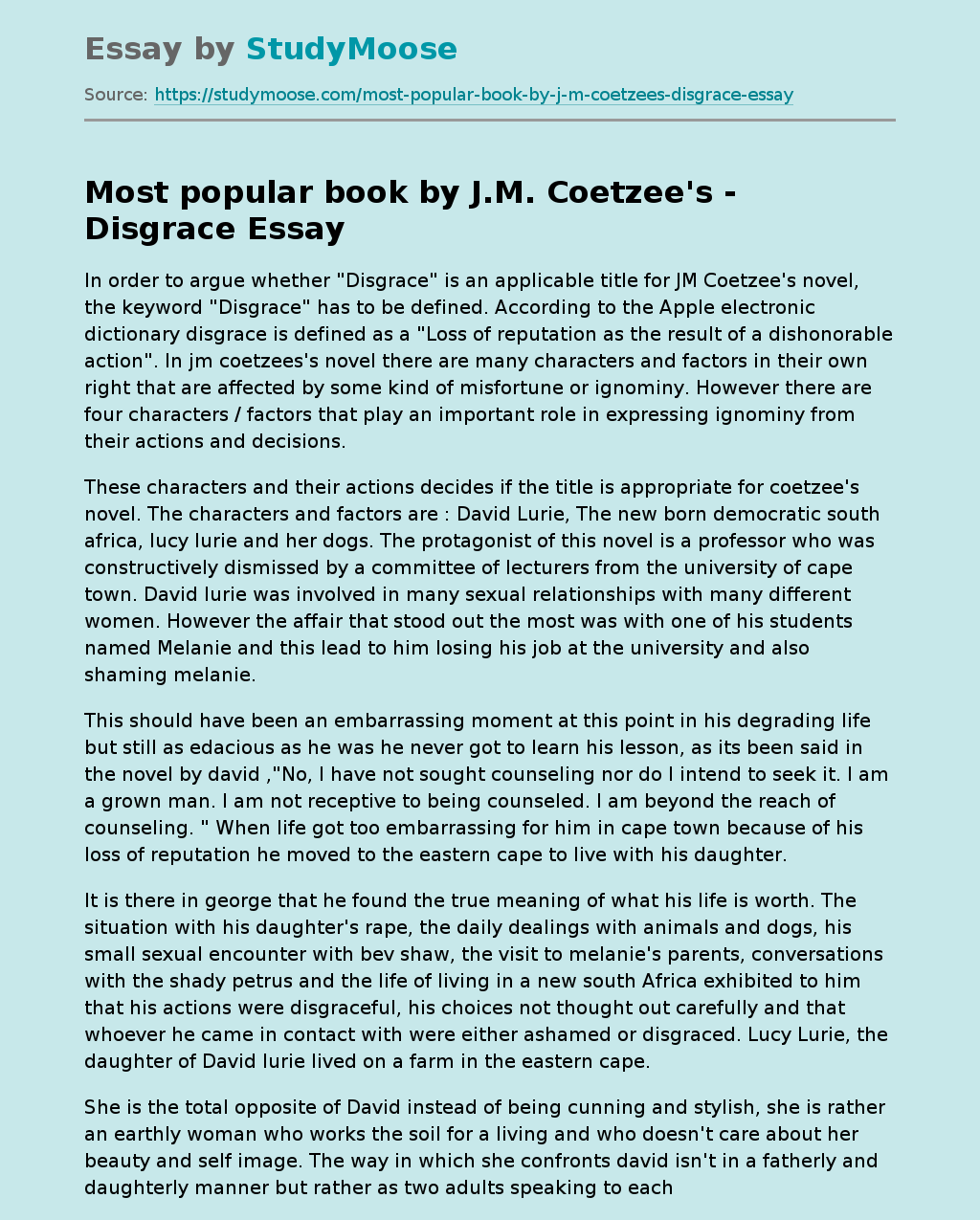