TITLE Atis (Anona squamosa) leaves as Mosquito Repellent PURPOSE The shocking increase of dengue incidents year after year is a concern of our local health department and the society. Studies show that most incidents affect children and adolescent people. Commercially, there are various products of mosquito repellents readily available for consumers but most of them are highly made from chemicals that are damaging to the skin and are expensive, making it less accessible to most people. This study aims to determine the effect of the said mosquito killer (atis leaves).

Don't use plagiarized sources. Get your custom essay on
“ Mosquito Repellent ”
Get custom paper
NEW! smart matching with writer

Especially it will answer the following questions: 1. Does the said mosquito repellent (atis leaves) cheaper than the commercial ones? 2. Will this mosquito repellent (atis leaves) be effective in repelling mosquitos? Atis (Anona squamosa), a tropical plant that usually grows spontaneously in the Philippines, aside from bearing fruits of white, sweet, soft, juicy and mild agreeable flavored flesh, also yields leaves where government health researchers found extracts for the formulation of an effective anti-mosquito repellant.

It is not only against dengue, in fact, but against all mosquito-borne diseases like malaria and filariasis especially in areas of the country where incidence is high. It also serves as a personal care product used in preventing mosquito bites that cause itchiness, inflammation and discomfort to individuals. The repellent uses a washable, oil – based formulation and it’s biodegrable since, it is derived from advantage against other well known repellents which are chemical based in formulation. The atis (Anona squamosa) leaves, as well as its fruit, have been found beneficial to human use and needs.

Studies conducted by big institutions such as the Department of Science and Technology and by the Philippine Council for Health Research and Development (PCHRD) shows that the atis plant has components that are potent in repelling mosquitos. Infact, atis serves a lot of purposes to human health as shown by the list created by the Bureau of Plant Industry: Medicinal value of Atis: 1) The leaves are applied as a poultice to children with dyspepsia. 2) Crushed seeds with coconut oil are applied on the scalp to rid it of lice. 3) A decoction of the seeds is used as an enema for the children with dyspepsia. ) Externally the leaves, the unripe fruit, and the seeds (which contain acrid principle) possess vermicidal and insecticidal properties. 5) The crushed seeds, in a paste with water, are applied to the scalp to destroy lice. 6) The unripe fruit is astringent, and is given in diarrhea, dysentery and atonic dyspepsia. 7) The bark, according to Nadkarni, is considered a powerful astringent and tonic. 8)The roots are considered a drastic purgative. The flesh of the fruit is reported to contain upwards of 10 percent of sugar, mostly glucose at 5. 40 percent and some fructose of 3. 60 percent.

In the Philippines the leaves are applied as a poultice to children with dyspepsia. Crushed seeds with coconut oil are applied on the scalp to rid it of lice. A decoction of the seeds is used as an enema for the children with dyspepsia. The bruised leaves, with salt, make a good cataplasm to induce suppuration and fresh leaves crushed between the fingers and applied to the nostrils cut shorts fits and fainting. The ripe fruit, bruised and mixed with salt, is applied as a maturant to malignant tumors to hasten suppuration. The unripe fruit is astringent and is given in diarrhea, dysentery and atonic dyspepsia.

The bark, according to Brinas, the regional director for Bicol of the DOST, has been reported by Nadkarni, an American ecologist who pioneered the study of Costa Rican rain forest canopies, as a powerful astringent and tonic to stop diarrhea. The leaves are used as an antihelmintic and its decoction for rheumatic baths to alleviate pain. For infected insect bites, juice extract after pounding an unripe fruit is applied directly to affected parts three times a day to cure the infection. The seeds are considered a powerful irritant to the conjunctiva while the roots are considered a drastic purgative.

Atis tree is small that grows only three to five meters high. Its leaves are hairy when young, oblong, eight to 15 centimeters long, with a petiole one to 1. 5 centimeters long. Flowers occur singly in the axils of the leaves, about 2. 5 cm long, pendulous, three-angled, light green to yellow. Fruit is large, slightly heart-shaped, six to nine centimeters long, the outside with knobby polygonal tubercles. The PCHRD studies also revealed that atis possesses anti-inflammatory properties as it yielded two new cyclic peptides, cyclosquamosin H and I, together with six known cyclic peptides, squamin A, squamin B, yclosquamosin A, D E and cherimolacyclopeptide B from the seeds. Compound 7 showed an inhibitory effect on the production of proinflammatory cytokines. Extracts of atis fruit pericarp was also tested for cytotoxic activity against Dalton’s lymphoma cells and HeLa cells. The chloroform extract was found cytotoxic to the different cell lines tested and suggests the potential for AS fruit pericarp for the development of treatment for cancers. The PCHRD said atis has an antihyperglycemic effect and alleviated liver and renal damage associated with STZ-induced diabetes mellitus in rats.

The diabetic groups treated with aqueous leaf extract were compared with standard glibenclamide. The PCHRD also said that the ethanol crude extract of the fruit of atis for antimicrobial activity against some pathogenic microorganisms showed inhibitory activity against S aureus and S pneumoniae. Results conclude the plant extract may serve as a valuable source of compounds with therapeutic antibiotic potentials. Likewise, phytochemical study revealed the presence of quercetin in the atis seed extract and the results of the effects of quercetin suggest an involvement of this phytochemical in the mediation of antithyroidal activity, it added.

INGREDIENTS -Cooking Oil -Atis leaves -Paraffin Wax PROCEDURES 3. Using a knife, chop the leaves into smaller pieces. 4. Together with the chopped leaves, pour the oil into the pan and wait until it boils. 5. While waiting, chop the paraffin wax. 6. After the decoction boils, remove the leaves. 7. Pour the chopped paraffin wax into the mixture and allow it to boil for about 3-4 minutes. After that, remove the pan from the flame and allow it to cool. METHODS Prior to using the atis leaves, we soaked it in water to allow moisture to stay.

It is important to pick leaves that are green and moist to allow for easy extraction of the extracts. CONCLUSION The medicinal use and benefits of atis have greatly influenced this study. Therefore, It proves not only its effectiveness but also its role in the local consumers giving an alternative option in choosing what’s best for their health and for their money’s worth, whether they go for what is organic or synthetic. RECOMMENDATION This product is marketed for all types of consumers, either rich or poor, and is strategically eyed for mothers who are looking for inexpensive but effective, safe, and organic for their children’s use.

We also recommend this product to our fellow nursing students since working in the medical field requires protection not only from deadly pathogens but also from denguecarrying mosquitoes. We also like to express that this product is the first organic mosquito repellent in the locality. Application of the Technology: Atis Lotion Mosquito Repellent is a personal care products used in preventing mosquito bites which cause itchiness, inflammation and discomfort to individuals. 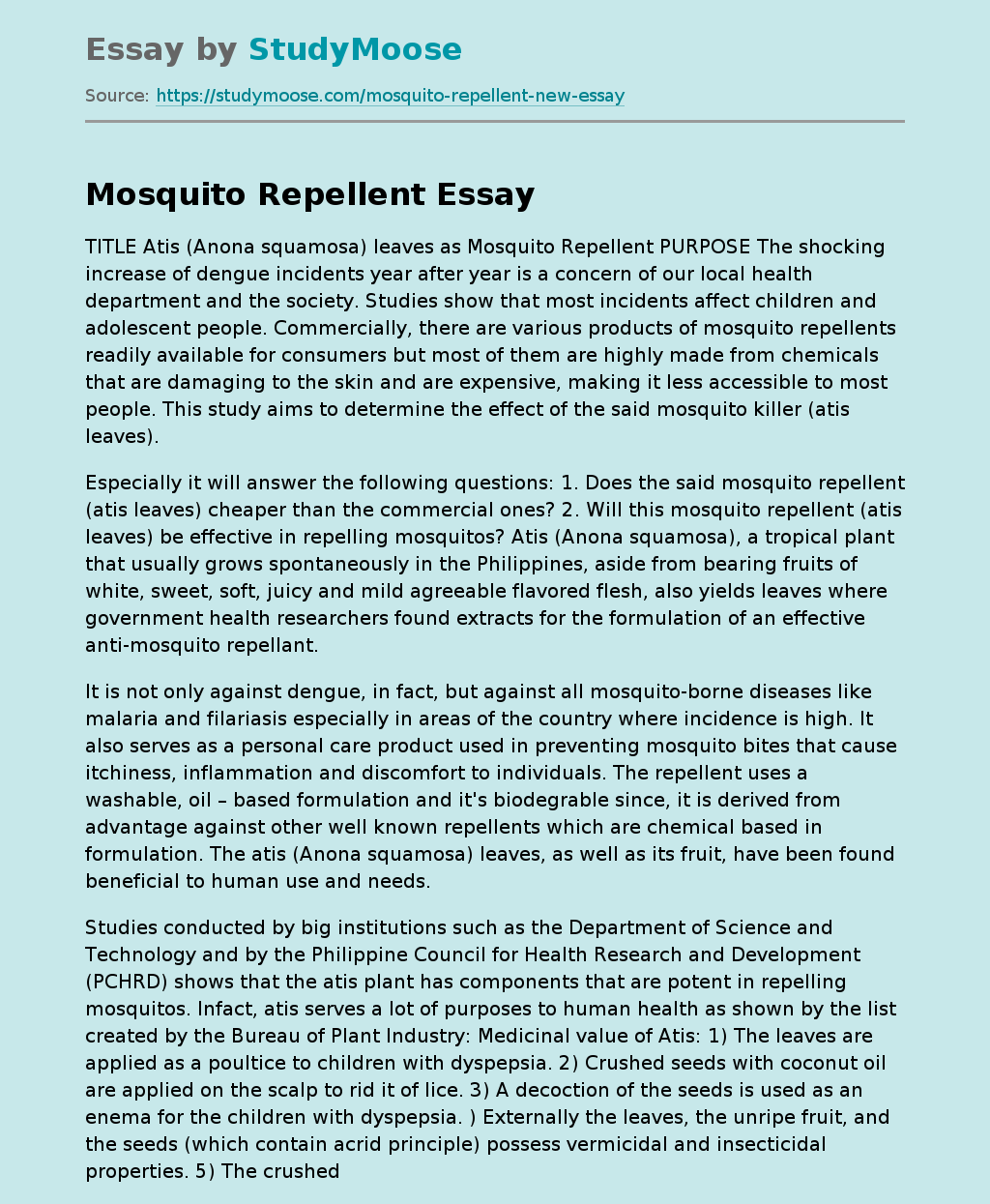