“According to Time magazine, September 27, 1993, violence in video games is on the rise especially with the release of Mortal Kombat. Over 50 million children all over the United States brought this violence into their homes. The parents and other adults of these children finally decided that the video games in the U. S. had gone too far. ” Mortal Kombat was the first game that brought blood and gore into the video game world. Mortal Kombat started in the arcades it was such a hit, they made it into a game you could buy for personal use.

Critics raved over it when it was first introduced, saying it was too violent for kids and it needed to be taken off the shelves. This game appealed to many people because of its real-life graphics, blood and gore. The game was also responsible for the video game rating system used today. The game was an instant hit, they made an endless amount of Mortal Kombat games, for every gaming system imaginable, there was even a movie made based on the game.

This essay will illustrate how Mortal Kombat is violent, and take a critical point of view of this popular game.

Mortal Kombat is a video game based around hand-to-hand combat between two characters in the game. The person playing would control one-character and use combinations of punches, kicks and special moves to cause as much damage to the opponent as possible. This game is fun and very addicting; children would end up playing the game constantly trying to master the moves and techniques of the game.

People found it fun because the characters and the worlds that you fight in seem like some fantasy, most people would fight their friends to see who would rein supreme; it was a constant challenge to be the best fighter.

With the new game that came out not too, long ago you are able to plug an internet cord in the back of your gaming system and play anyone in the world. This game caught so much criticism that the makers had to take the blood out of the game, and they turned it in to white sweat, but little did the critics know that there were codes you could enter to bring the blood back to the game. There also were codes called “Fatalities” which were finishing moves where you could decapitate someone’s head, rip their arms off and burn them alive.

The new game is even worse than the original with more finishing moves and better graphics. When you go out and buy a game like this, you should know what to expect; that you are going to be fighting an opponent with the intent to kill him. The basic principals of this game are fine, but the more advanced our technology gets the more graphic the games get. The blood and gore look almost life like now, which is not necessary to have to play the game. The game was given the MA rating which is for people 17 and older.

The rating made the game intangible for young people to go out and buy. Because young kids could not have the game with the new ratings, they just wanted to play them even more. People who are sheltered from reality will be worse off, than people who are allowed to experience real life. There are some countries in the world, who do not even have electricity let alone video gaming systems, but are still are involved with senseless killing of each other. In other countries, it is just as common for young children to carry guns as it is for Americans to play video games.

I think that violence is part of our society. I do not think that video games are any more violent than movies, television and the general violence in the world today. As far as the people who take what they see in video games and imitate it to real life I feel there is a mental problem and they need help, because they have a hard time separating fiction from non-fiction. Mortal Kombat was one of the first of many video games that got controversy for being too violent.

This game also led the way for countless other violent video games. I feel as if no one would have made a big deal out of the violence there would not be problems that there are today. As they put stricter ratings on the games it only made people want it more. This game was so popular that there was a movie made after it and all the characters seemed to come to life on the big screen. As the critics put the whole concept of violent video games down, all it did was feed a fire to burn and made Mortal Kombat became larger than life. 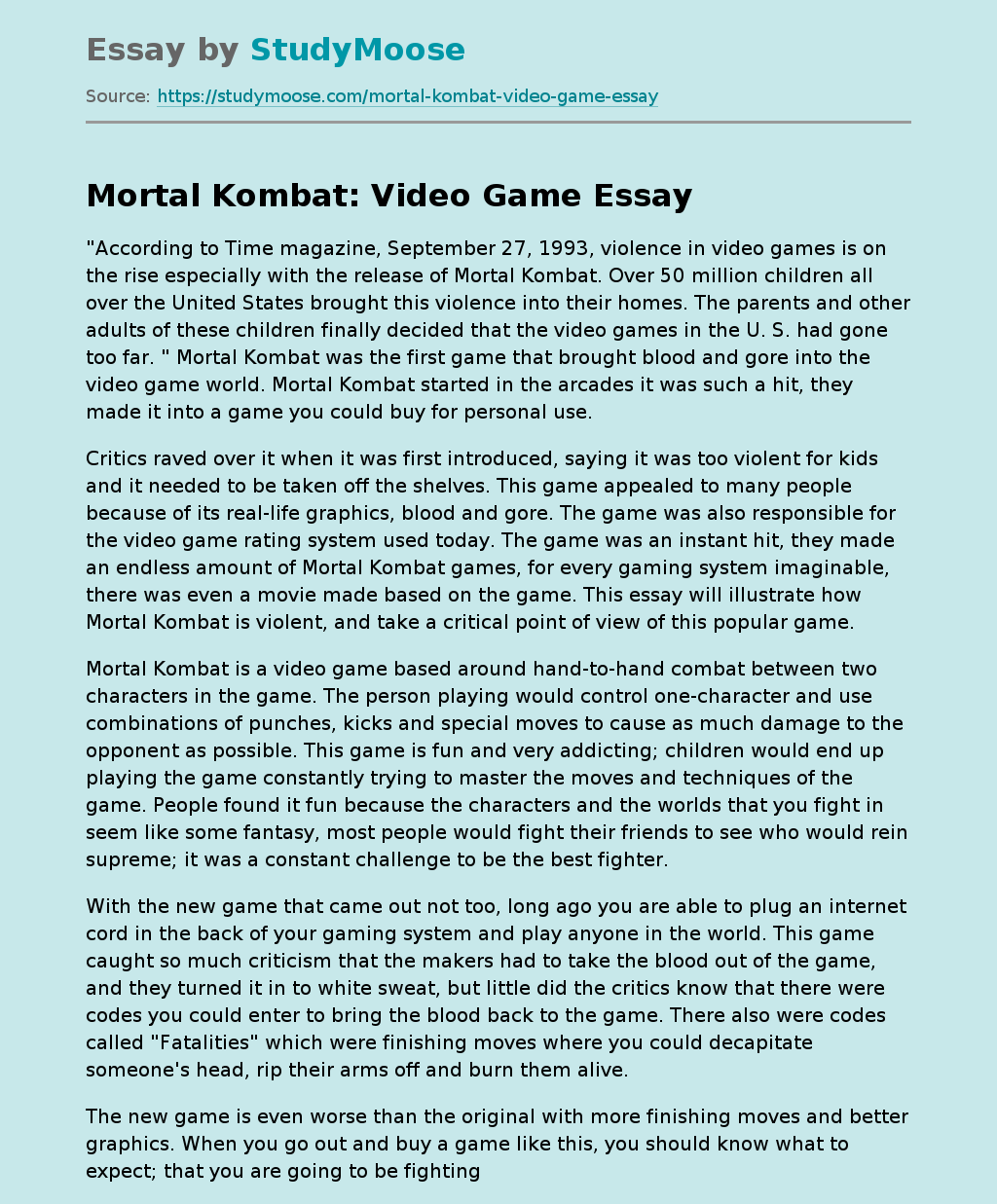