The book begins by introducing the very lovable main charcter who the story is told by, Tom natsworthy, he is a 13 year old boy who works in the historians guild aboard london a large city that has been put on masssive wheels and now roams about what is called the “hunting grounds” in search of “prey”. He is what is called a tractionist these are poeple that after a catacylsmic war that completed decimated the planets population and created massive tracks ofunhabitable landscapes, devolped the technology to make thier cities mobile in order to maneuver the terrain.

Their is still an ongoing war between the two factions, the tractionists who believe in Darwism and survival of the fittest and the anti-tracionists who believe in cites being stationary. The story follows the dramatic events that take a scholarly boy out of his sheltered setting at a museum and thrusts him into a world of anti-tracionists, air pirates, and reserected humans turned into mechanical monsters.

Tom is in strong contrast to the characters around him, including another main character hester, an anti tracionist who’s father abonded her and mother who was killed in front of her when she was just five and since then has become a untrusting and cut throat killer, these two unlikely companions are forced to work together to survive when they are both stranded in barren wastelands.These contrasting characters examplify themes that thread through this book, those of mechanical and organic, the ancient and modern, good and evil.

despite their releationship with eachother Tom and Hester were raised to have completly diffrent philisophical views of the world but are able to eventually grow to accept one anothers idoelogies through the experinces and hardships they go through together.

“It was a dark, blustery afernoon in spring, and the city of London was chasing a small mining town across the dried-otu bed of the old North Sea. in happier times, London would have never bothered with such feeble prey. The great Traction City had once spent its days huntign far bigger towns than this” This quote illustrates the dog eat dog world this book is set in and is an example of a reoccuring theme that is thread throughout the book, the contrast between mechanical and organic. The poeple in the book are graced with advanced technology that we could only dream of, yet they use it in such a primal way. They somehow have reverted to primative ways and use their collussul creations to hunt one another even to the exstent that they refer to cities as if they were living creatures. The tone is both dark and medevil withe the anger of conflict and war permiating this science fiction scenario.

An attraction and strength of this book is the invetive settings and originality of the cultures and characters that inhabit the story. It is a vivid and invetive steam punk book that melds science fitcion and the future with so many elements that are familair from the past with deep thought provking ideas. The description of the landscapes interoir and exteroir the detailed inventions and the gripping plot hold the readers attention and leave you anticipating were the story will go next. 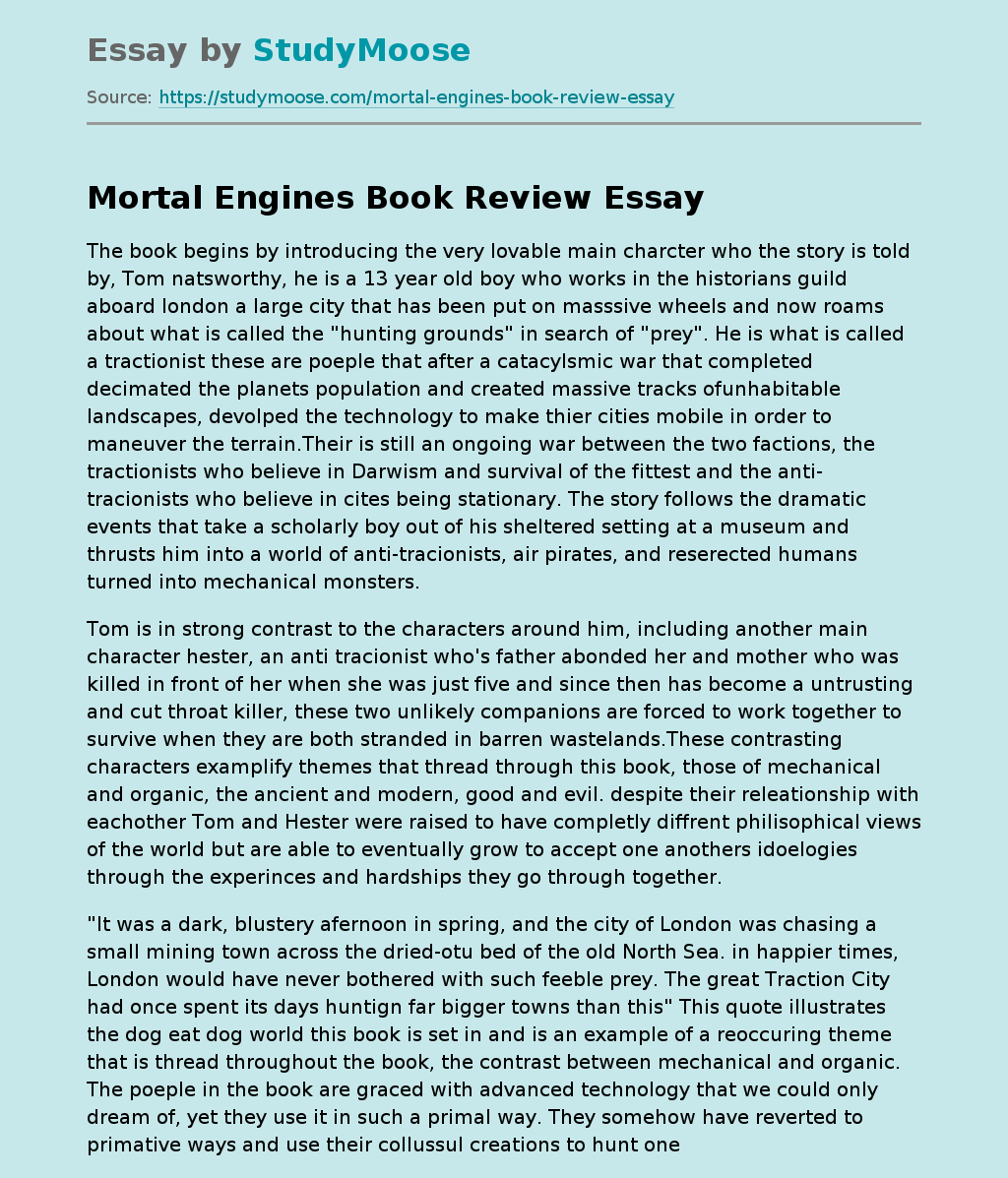