More frequency of the infection in the age group of (19-32) years while the lowest infection rate was noticed among age groups between (5-18) years. (150,175) also found that the high incidence of infection occurs in older than 15 years. Another study by (176) and (177) also established the lowest frequency among the age group older than 50 years. The reason for the low rate of elderly patients may be related to the fact that they were infected during their early ages and acquired long-term immunity during childhood ,another factor is that older people do not admit to the treatment of CL while they know this disease and disfiguring scars are not as important for them as for youngsters (178).

Don't use plagiarized sources. Get your custom essay on
“ More frequency of the infection in the age group of 1932 years ”
Get custom paper
NEW! smart matching with writer

Also, this differences could be due to this age may playing outdoors for a long time and more exposure to the infected sand flies; many investigators postulated that are the decrease in the incidence with the age was due to development of the immunity by previous infections (40).

The result of present and other studies pointed to, this diseases can infect the individuals at any age.Also, the (5) reported that people of all ages are at risk for infection if they live or travel where Leishmania spp is found.

The distribution of cutaneous leishmaniasis infection between males and females by using microscopic examination was indicated in table (4.3), The patients were of different sex, out of 122 specimens, 30(24.6%) were males while the rate of infection between females were 20(16.4%), the differences between the gender and the infection rate with cutaneous leishmaniasis were no statistically significant by using microscopic examination (p>0.

Table(4.3): Distribution of patients according to the gender based on the microscopic examination and PCR results.

Depending on genders, The present study revealed the rate of cutaneous leishmaniasis which is higher in males than in females by using microscopic examination and PCR assay. In Iraq (40) also found that males were (57%) and females were (31.7%). Another study by (176) recorded that the infection in males was 65% than females (35%). (179) also decided that the prevalence in males higher than females. Similar results were also established in studies by (41), (177). In Saudi Arabia, (180) documented that the incidence rate of CL was higher in males than in the females in Al Hassa from 2000 to 2010. In Syria, (181) found that Syrian males are more infected with the parasite than females, In Jordan, (169) and in Iran (182) and (183) were also recorded that the prevalence rate was most frequently in males than females. The same result in Turkey (184), This is probably happened due to the cultural habits of most areas.

Otherwise, the results of the present work appeared to disagree with the other previous Iraqi studies by (167) and (185). Also (150) found in his epidemiological study of Cutaneous Leishmaniasis in Tuz found females are more infection than males, in Yemen by (186) who documented that females most infected with CL than males.

These results may be attributed to the fact that males are more exposed to the insect biting more than females due to working outdoors and also due to men are less covering than women then exposed (175). Although it is believed that sex hormones may influence the establishment and the course of parasitic diseases, behavioural factors, making male individuals more likely to be exposed to vectors in fields and other transmission environments, are probably equally or more important(179).

The males are more exposed to the environment where the sand flies present by walking near rivers or swimming beside males work in the farms, while the females mostly staying in the houses ( 187). (188) found the highest per cent of infection related to the geographical site which was near water stream flow all year and abundance of fresh water holes which provide sand flies a suitable environment to complete its life cycle and increase agriculture activities.

Table (4.4): The rate of infection with cutaneous leishmaniasis according to residency based on microscopic examination and PCR.

Leishmaniasis usually is more common in rural than in urban areas because there are many factors that is a play an important role in the presence and the distribution of CL in this district, including the presence of the animal reservoirs such as the rodents, the dogs, etc; the presence of the marshes; and the use of the clay to build some of the houses in the villages that belong to this district of the area. Furthermore, as an agricultural area, the attracts and the harbours many kinds of the insects; therefore, it’s the population works long hours in the farms where they

are more exposed to the insects bites (40). But it is found in the outskirts of some cities. ( 184). (196) reported that the people who may have an increased the risk for infection (especially with the cutaneous form) include adventure of the travellers, the ecotourists, the Peace Corps volunteers, the missionaries, the soldiers, the ornithologists (people who study the birds), and the other people who do the research (or are active) outdoors at the night and the transmission of the risk is highest from dusk to dawn because this is when the sand flies generally are very active also the duration of infection depending on Immunity of people, place of infection, number of lesions and have treatment.

Different parts of the patient’s body were observed with infection of Baghdad boil that including the face, the arms, the legs and the feet, but number of the patients that infected in arms (upper limbs) had the highest percentage (48%) when compared to another sites of infection, followed by the legs and feet (28.6%), , face (20.8%) and other site (shoulder ,thorax and neck) (2.6%) ,with highly significant differences (P

More frequency of the infection in the age group of 1932 years. (2019, Dec 14). Retrieved from https://studymoose.com/more-frequency-of-the-infection-in-the-age-group-of-1932-years-example-essay 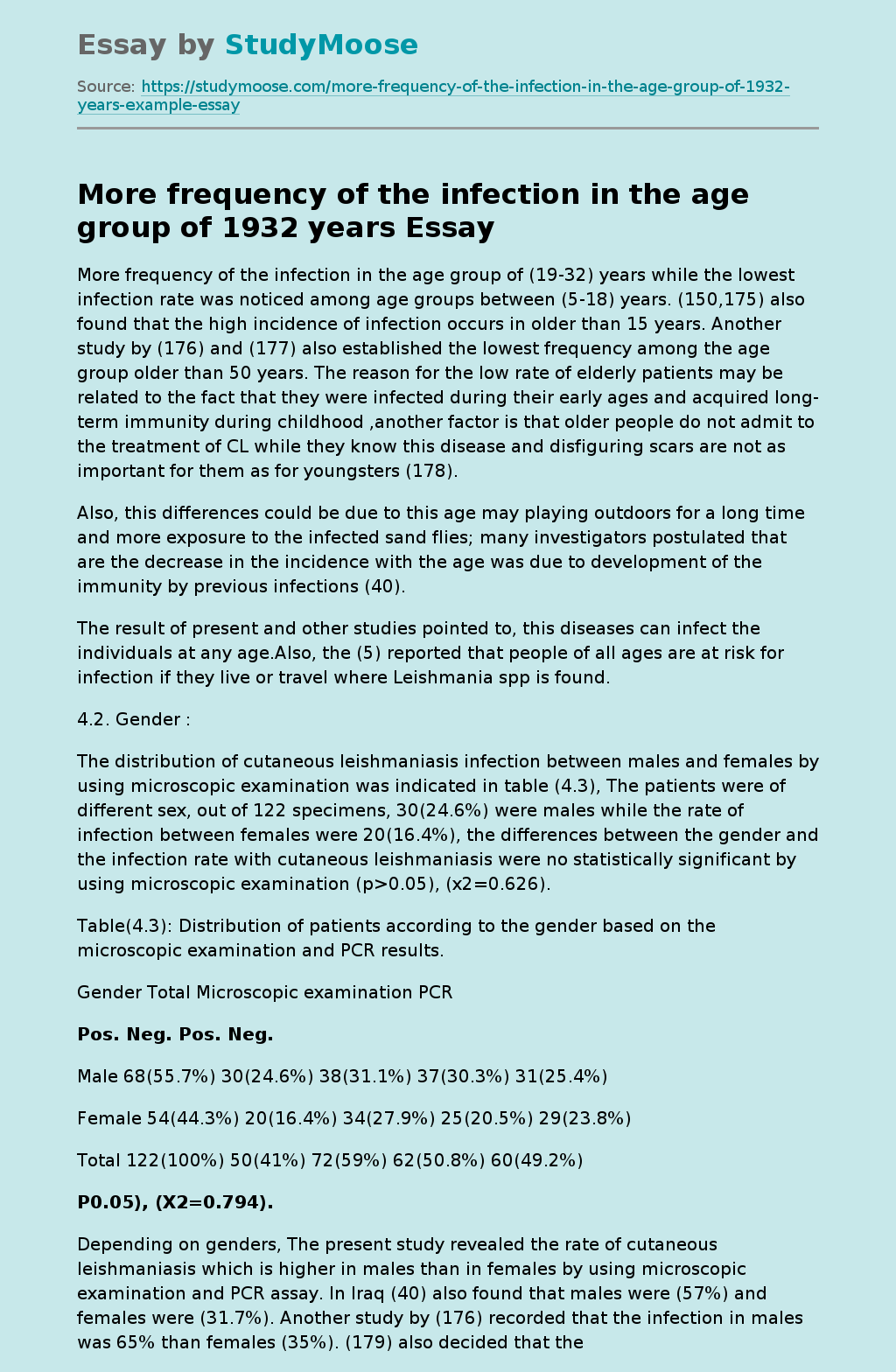