Ethical Problems in The Possibility of Evil

Envy, greed, lust – all examples of “evil” things done by us all; nevertheless, what is evil? Can we stop it, and if so, are we obligated to? Before we speak about the obligation of the normal person to stop evil, we have to understand what evil is. Evil is what a person accepts it as true; this can be seen in the story inside Miss Strangeworth. She does not believe her letters create problems rather than solve them.

Don't use plagiarized sources.
Get Your Custom Essay on Moraliy in Shirley Jackson’s Novel Just from $13,9/Page

And that in another person’s eyes, she can be perceived as evil. The other big question was, is she obliged to stop the evil that is happening in the community, and how is she suppose to go about “helping” the people out?

Before we can discuss a person’s obligation to stop evil, we must first determine what evil is. Evil is described by most as “morally wrong’; however, how do we judge when someone is evil, or has done an evil deed? Evil is in the eye of the beholder; what someone believes to be truthful and correct may be seen in the eyes of others as disrespectful and malicious.

The largest example in the story is Miss Strangeworth’s letters “The town where she lived had to be kept clean and sweet; people everywhere were evil and needed to be watched”. Miss Strangeworth did not bother to think that to others her honorable work was perceived as evil, nor did she take the time to investigate the gossip which was the inspiration for her wicked letters “Miss Strangeworth never bothered about facts; her letters all dealt with suspicion.”

In every day life, much like in the book, evil is judged on action, and it is judged differently by others; nonetheless, society came to agree on what “evil” should be depicted as. One of these evils is judgment. It is said not to judge books by their covers, and this is especially true in the story. Miss Strangeworth seemed like a nice lady, and her wonderful rose garden along with her long years of residence clouded her true “evil” intentions towards “tourists who sometimes passed through the town and stopped to admire Miss Strangeworth’s roses”. And what the story is trying to tell us about “evil” is that evil is merely ignorance, and that it is judged based on situation and ethnic values.

In the story, Miss Strangeworth believed she had found the evil that scourged the community, and it was not her decision, but her duty, to stop it.” But, as long as evil existed, it was Miss Strangeworth’s duty to keep her town alert.” This clearly shows that she believed herself to be righteous, and that she believed that she was the owner of the small town. “She sometimes found herself thinking that the town belonged to her” However, her thinking method was completely wrong. If evil is depicted, the first person who should hear about it is the person doing the misdeeds themselves.

This may in turn allow the people to reach an agreement, or realize the misunderstanding. If future problems would occur, the whole town should approach the troublesome individual or group. Miss Strangeworth took a completely different approach. She wrote letters that mocked and humiliated the poor folk with rumors and gossip, which may not be true “She never got any answers, of course, because she never signed her name”. This caused for future altercations when two teens discovered one of her letters, and personally delivered it, telling the receiver whom sent it. The incident caused Miss Strangeworth’s roses to get ravaged; it is discovered in a letter she receives at the end of the story saying “LOOK OUT AT WHAT USED TO BE YOUR ROSES.”

In conclusion, every person on this earth has done misdeeds; nevertheless, that does not make them evil. We are not obligated to stop evil, because we do not fully understand what evil is. What one sees as evil, others may see as good; what one may determine bad, others may see as righteous. The approach to stop evil is not right, because we do not have the ability to judge for everyone. Certain cases such as law breaking remain obvious; however, Miss Strangeworth’s approaches were incorrect because what she saw as evil was merely a misunderstanding. From the story we learn that even though appearances are deceiving, Miss Strangeworth herself is not evil. She is just a person with different standards, and totally opposite beliefs from others. She is also completely unaware of her nature “She began to cry silently for the wickedness of the world” 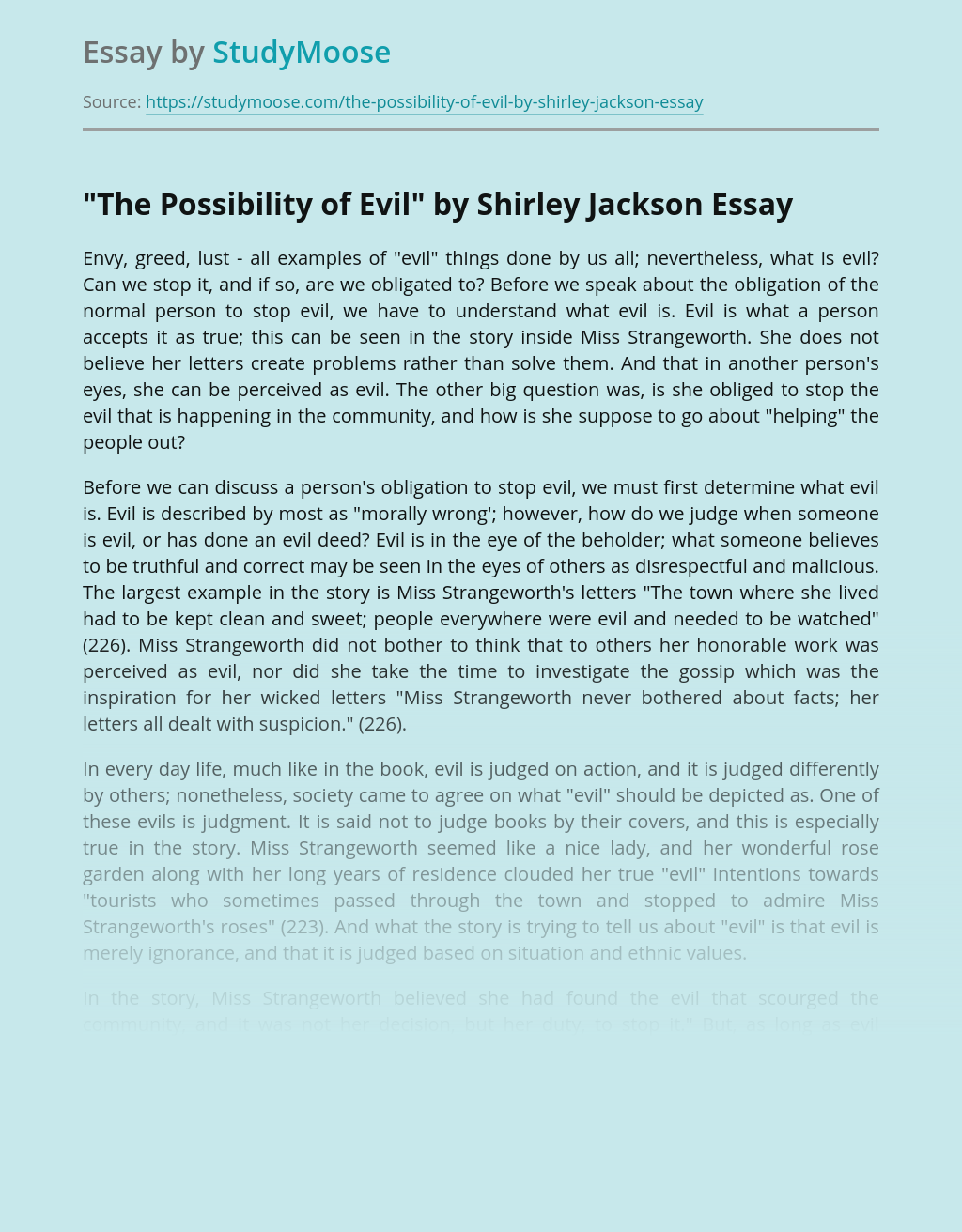 Ray Bradbury wrote The Illustrated Man in 1951. The general context of that time in the USA had a powerful impact on the themes he chose to base his book on. The Second World War had seen horrific crimes against humanity, dictatorship and a change in family life which was due to both the huge...

Get Essay
Reaction to Dante's Inferno

Reading Dante’s Inferno has been a challenge for me, especially at first when I didn’t understand some of the main themes Dante was trying to get across. My values are so different than those of Dante when it comes to the afterlife, it can be hard to read something that is so contradictory of my...

Fiction is often used as a vehicle to convey radical ideas to readers. These ideas are usually reflected in the themes of the stories so that the clarity of expression is more apparent. The theme of Charlotte Perkins Gilman’s “The Yellow Wallpaper” is quite unique in that it expresses feministic ideas in a seemingly ordinary...

Optimism as Positive Attitude And Thinking

Optimism is a mental attitude or world view that interprets situations and events as being best (optimized), meaning that in some way for factors that may not be fully comprehended, the present moment is in an optimum state. The concept is typically extended to include the attitude of hope for future conditions unfolding as optimal...