In The Morality of Inertia, Lionel Trilling argues that Ethan Frome’s inability to make his own ethical decisions ultimately makes his ‘smash-up’ a tragic event caused by the inactivity of morality. The nonexistence of this moral inertia is the explanation, for Trilling, for the outcome of Frome; the lack of moral responsibility in any of the main characters from the beginning of their lives paralyzes their decision making process– they simply exist and do what is their duty.

Trilling’s aspect that Frome was a morally inadequate man is a valid fact affirmed by Edith Wharton’s provided background of him; the idea that he was unable to make choices and is only capable of enduring can be proven inaccurate with his Frome’s actions throughout the story.

Don't use plagiarized sources. Get your custom essay on
“ Morality in Ethan Frome ”
Get custom paper
NEW! smart matching with writer

Trilling uses Frome’s “duties as a husband” and son as support for his claim that “[c]hoice is incompatible with [Ethan’s existence]” (from Morality of Inertia).

However, the reader is exposed to Ethan’s ability to recognize choices, and decisions not to act on them, throughout the story. Frome acknowledges his dilemma of running away with Mattie or staying with Zeena, but is inefficient in seeing past the initial consequences of each choice and exploring other possibilities of escape besides the basic.

Ethan’s central decision in the book, to commit suicide with Mattie, is made with free will; although it is Mattie’s idea, Ethan agrees and takes the reins in the front of the sled.

Although Ethan Frome is a broken man perpetually frozen in a bleak Starkfield, one cannot disregard his inaction when he is presented and acknowledges choices. He constantly contemplates expressing his love for Mattie, looking for “the all-expressive word,” but fails to, even when alone with her, making “free choice” a moot point (Ethan Frome; from Morality of Inertia).

Morality is not caused by inertia in Ethan’s case but personal authorization– Ethan’s decision to commit suicide proves this point; the act proves that he was capable of confessing his love to Mattie, but failed to up to that moment. Although Frome can be held responsible for his moral inactivity, he can be considered a morally inadequate man in his present state. His inadequacy, however, was not a constant in life or a sudden occurrence– it snowballed from his youth and finally solidified through the ‘smash-up’.

His earlier experiences in a university and the joy it brought him was quickly interrupted after a year by his sickly parents. The unfortunate circumstance forces Ethan Frome to move back to the depressing Starkfield he had just escaped. His parents’ illnesses bring along Zenobia, who would be another future, unseen oppression along with Starkfield. For years, Ethan lives in depressing conditions that decline as time goes on. The chance to finally leave them behind, however, comes in Mattie, Zenobia’s cousin and maid.

Ethan’s inability to act on this chance of escape finally seals his fate when Mattie is paralyzed and he is critically injured. Although jinxed with unfortunate circumstances, Ethan Frome’s life could have been bettered if one small step or action was taken by him for himself with the intention to create personal joy or pleasure. The importance of taking steps in life betterment can be seen in Ethan Frome. Although one may lack a history of “making moral decisions,” the human instinct to do so is always there (from Morality of Inertia).

Ethan Frome was able to rationalize and recognize choices inside of his head; it was his inability to act on any one until his attempted suicide that created his depressing circumstances. The irony of his only decision with Mattie being one of the most deciding ones in his life underscores the fact that if he had taken this initiative before this instance, his life might have taken a different track. This was not a forced or accidental occurrence; Ethan Frome was in fact an unfortunate individual in undesirable circumstances, but with a free will and mind developed enough to make 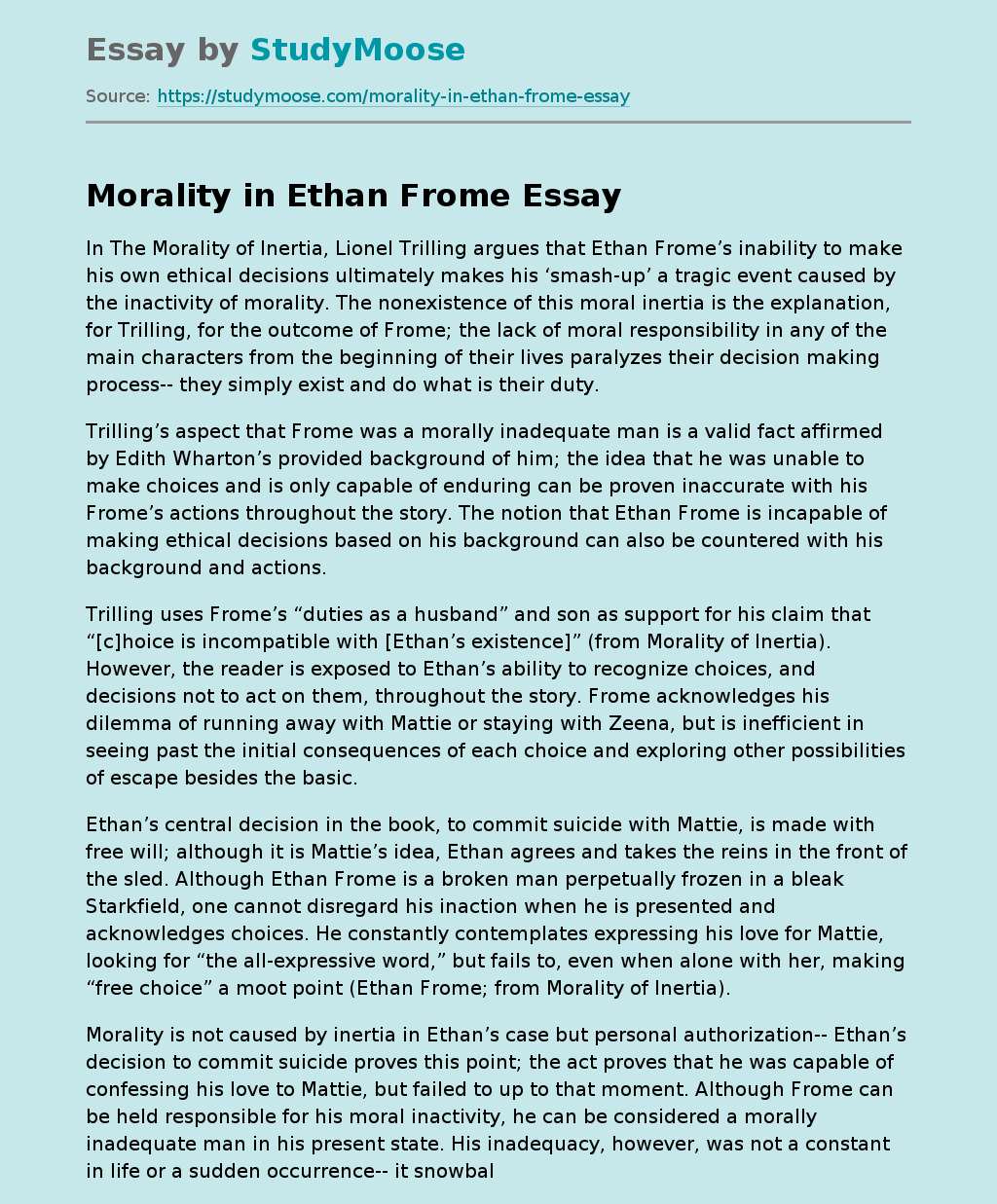