In 1994 Kevin Carter won the Pulitzer Prize for Photography thanks to a photograph that he took in the village of Ayod in Sudan of a child crawling towards a feeding center. Whether it was morally right for him to have captured that moment instead of helping the child is a debate with many people. Some people believe that it was right because it helped stop the famine in Africa, others believe it was wrong because he did not aid the child after taking the picture.

Don't use plagiarized sources. Get your custom essay on
“ Morality Essay ”
Get custom paper
NEW! smart matching with writer

It is understood that there was thousands of refugees walking and crawling towards the food center, so was he suppose to help everyone or just that child? In philosophy class we have been talking about Morality in Kant’s point of view which is the Categorical Imperative and also about the Morality point of view based on Consequentialism. I believe that it was not morally permissible for Kevin Carter to leave the child because of Kant’s point of view on Morality, and that he should have not won the Pulitzer Prize for Photography based on this photo and I will explain why in this essay.

According to Kant we should base morality on the Universal Law which means we should universalize our actions. This law is the same as the Golden Rule; Treat others the way you want to be treated. What Kant established basically was that we should respect all persons morally equal. The Consequentialism point of view on morality on the other hand is that we should base it on the principle of utilitarianism which means that for an action to be moral it must produce “The Greatest amount of Good for the Greatest amount of people”.

Even though I agree with the consquentialism point of view on morality I do not agree with it this time. Why? Because I believe that at all times we should treat others the way we want to be treated and that all humans are equal. This is why when answering our question I based my answer on Kant’s point of view based on morality. I believe that it was not morally permissible for Kevin Carter to leave the child after he took the picture. First of all I believe that Kevin should have not taken the picture period, he should have right away went to aid the child.

Like Kant said we should treat others the way we want to be treated, if Carter was in a position like that he would have not liked to be left there to his own luck. I understand that Carter had a professional obligation where he is only an observer not a participant, which means he was only there to observe and take pictures of the whole situation. I also understand that he was there illegally and that he did not want to get caught yet he had a personal responsibility to help the child.

In passage given to us by Professor Jordan it is said that Carter was with a group of photojournalist called “the Bang-Bang Club” by a Johannesburg magazine. These people wanted to make the world aware of all the issues of injustice. There is where I believe that Carter’s personal responsibility plays role. Carter wanted the world do be aware of all the issues going around the world and for them to help. They were there because they wanted other countries all around the world to stop the famine, yet he did not help a child when it was in his hands to help that child and just left.

Carter here was contradicting his believes to start with. Carter did not only just take the picture but waited several minutes for the vulture to spread his wings so he could get a more dramatic shot. Carter did not only use the child to get a picture but waited patiently to get a better picture instead of scaring the vulture right away from the child and helping him or her. There were more pictures that could have impacted us, and I am sure that if he looked around he would have found this is why I do not believe he should have taken the picture.

I honestly do no believe that he should have one that prize. In Conclusion I believe that Carter should have not used the child to take that picture, and he shouldn’t have won the prize. I believe that Carter had the responsibility to help the child because he saw the child suffering and in danger of getting attacked by the vulture. Given the fact that he was the only one there he had the responsibility to help the child. We should do unto others what we would like to be done to us. If I was in that child’s position I would have liked to be helped like I am sure Carter would have too.

I think that if Carter would have helped the child he would have not been depressed and committer suicide because he would have known he did something good by helping the child. Like I said before I am pretty sure he could have chosen another photograph to get his point across to have people help stop the famine. Besides he wanted people to help yet it was in his reach to help this child and he did not? He was going against his own believes in my opinion. I believe that it was morally wrong for Carter to not help the child get to the food bank or at least a safer place, closer to were that child could get the help needed. 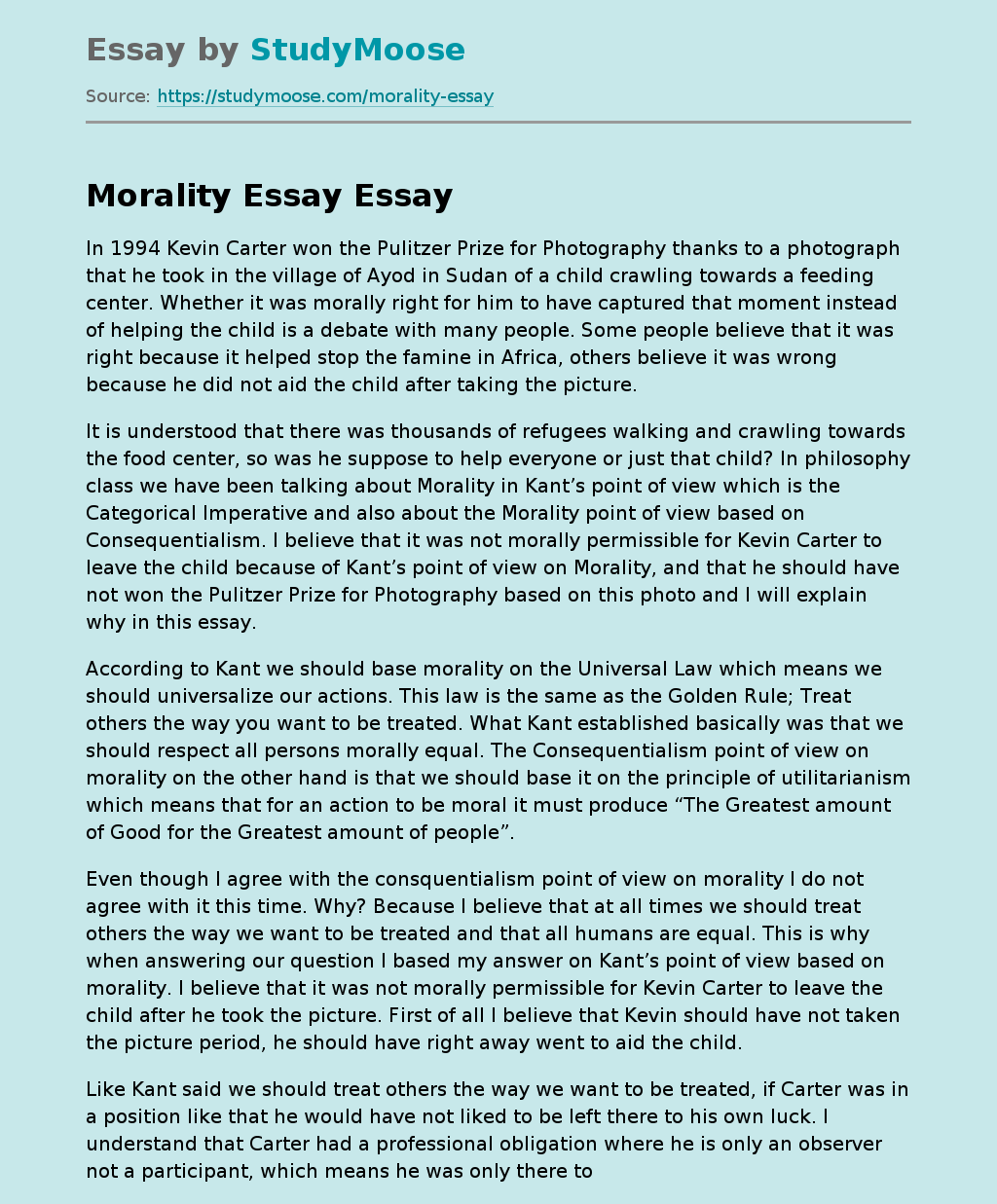