As rightly said by Mahatma Gandhi: “Earth provides enough to satisfy every man’s need, but not every man’s greed” The definition given by the stanford encyclopedia of philosophy is : “Environment ethics is the discipline in philosophy that studies the moral relationship of human beings to,and also the value and moral status of,the environment and its non-human contents.” What I understood from this was that concept of environment ethics says that all the living creatures on the earth have the right to live happily and without any thread to life but as we are destroying nature,we are taking away there this right from all other living things.

Don't use plagiarized sources. Get your custom essay on
“ Moral Responsibility Towards Environment  ”
Get custom paper
NEW! smart matching with writer

We as humans are too selfish and only think about what’s good for us and not about the non-human entities but we should think about them too and it should be our primary duty to preserve their rights to live. In-short what environmental ethics teaches us is that we should we should show morality to the non- human world.

Proficient in: Ecology And Environment

Now as we are hearing about the increasing pollution in delhi ,this will actually affect more significantly to the young children rather than the old people,as will going up their bodies are weak against such things(low immunity), which is actually decreasing average age of people living in a polluted environment.

With decrease in the resources we are forced to lower our living standards and also due to reduction of biodiversity we would not be able to make medicines,which were used to be made from animals/plants which are now extinct,moreover because of this we are losing the beauty of biodiversity. Future generation badly need us to use our resources ethically because this would really affect much more to future generations.So we need to take actions and make policies which are for the betterment of the future generations. (Gewirth, 2001) But some philosophers argued that why we need to think about them,we don’t even know them,moreover we can’t gain any profit them or they can’t pay us back what we are doing for them.For example,philosopher Brain barry has argued that we need to protect at least some minimal amount of resources for them so that they could have a good life.

Idea of good life for him is that we don’t stop them from getting basic resources,such as food ,water and so on. (Barry, 1999)Then he argues that we should not be the one who separate them from their basic needs. So in order to avoid this we should do something like for example we need to put a barrier for pollution,population growth,resource depletion and so on. Now let us talk about whose responsibility it is to restore all the depleted resources,for example when a industry clears a large amount of land by removing trees,then is it the responsibility of industry to restore it back?

Another example would be Slash-and-burn techniques which are used by farmers to clear land by burning trees,just for the sake of agriculture,which is actually beneficial for the humans but on the cost of thousands of trees and plants.I will this is the responsibility of each and every individual on this earth to take care of the environment. By this it would be very very easy for us to maintain the environment in a healthy state. But this pollution and depletion of natural resources is not the only concern,as because of deforestation we are extincting many species which are essential part of our ecosystem. Another important point in relation to environmental ethics is about our moral responsibility to preserve animals.

We have been killing animals since the birth of the humans,for food,clothes,medicine,research and so on. We from starting of this universe have only thought of our own and have never ever thought about the moral standing of a animal. It is quite a bad to neglect the feelings of the animals and only thing about the benefits we can get from them. They also exist within the nature,and hence the part of the environment. And hence we have to discuss about their welfare under this topic. Just because of the fact that we using resources like trees in forest etc,we are actually increasing de-stability in the environment but also taking away home of thousands of animals. By which we are affecting the rights of a animal,which is to live and live in a terror free environment. (Singer, 1993, ch. 10, and Regan, 1983/2004, ch. 9) 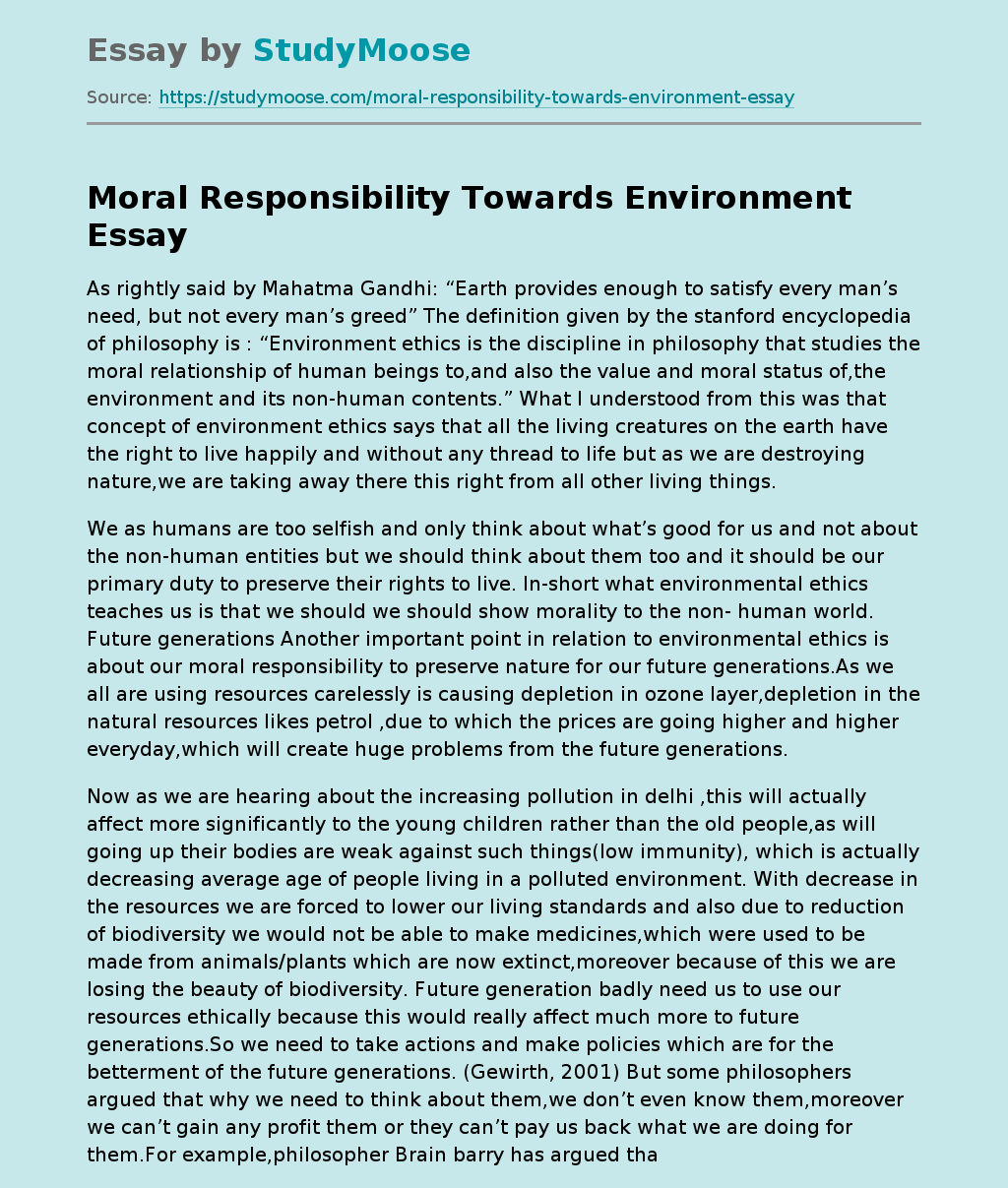