Tragedy is an essential aspect of many of Shakespeare’s most critically acclaimed plays. A.C. Bradley, one of the foremost thinkers of Shakespeare’s works, created a theory that explored these tragic dramas. The concept of Good and Evil become essential to humanity, and as a result, figure prominently in a balance of what he refers to as a moral order.

A. C. Bradley found a common link or thread that remains to this day consistent with all theories regarding tragedy – that the ultimate power in the tragic world is a moral order.

According to A. C. Bradley, the main source of calamity and death in the tragic play is never good. In Shakespeare’s drama, evil is the force responsible for the phenomenon of tragedy. This force is “not mere imperfection but plain moral evil” (A. C. Bradley 689). In King Lear, evil takes its core power from greediness and ingratitude of king’s two daughters, Goneril and Regan. Their intentions and deliberate actions are pure evil, “Beneath is all the fiend’s.

There’s hell, there’s darkness, there is the sulphurous pit…” (4.6. 143-144). The reason why the two sisters praise their father in the beginning of the play is justified by their desire to inherit Lear’s kingdom and supremacy. Goneril’s and Regan’s declarations of their great love for King Lear are insincere, because their actions contradict with what they proclaim, “His [Lear’s] daughters seek his [Lear’s] death…” (3.4. 163). Because of Goneril’s utter ungratefulness and lack of love or compassion, she mistreats her father and insults his dignity, “She [Goneril] has abated me [Lear] of half my train; Looked black upon me; struck me with her tongue, Most serpent-like, upon the very heart” (2.

Her sister, Regan, due to her alike vile nature, shows her entire support and endorsement to such a behavior. Edmund’s character comes from the same evil ground as the one of the two vicious sisters. He is, too, engrossed by the desire to own his father’s land, and thus, commits treachery and deceit, “…thou [Edmund] art a traitor, False to thy gods, thy brother, and thy father…” (5.3. 159-160). The wicked qualities and the intentional wrong doings of these evil characters are the main cause of grief and suffering in the King Lear tragic play, “How sharper than a serpent’s it is to have a thankless child” (1.4. 291-291). Therefore, in Shakespearean drama the commotion of tragedy proceeds primarily from the actions of the ominous characters in the play. If the evil purpose disturbs the peace and order in the world, then, this ultimate order must be inimical to this power and be akin to good.

Next, A. C. Bradley diverts his attention to the main character in Shakespearean play, the tragic hero. To be thought of as an honorable and highly admirable individual, the tragic hero still shows some evident imperfection or dreadful flaw. This tragic trait of the hero is vile in its nature, and therefore, contributes to the tragic effect of the play. King Lear’s fatal decision to banish his youngest daughter, Cordelia, and his most trusted servant, Kent, is incited by king’s excessive vanity and hastiness, “…he [Lear] hath ever but slenderly known himself… Such unconstant stars are we like to have from him [Lear] as this of Kent’s banishment” (1.1. 322-330). Lear is not happy with Cordelia’s simple, though true, declaration of love for him, “…I [Cordelia] love your Majesty According to my bond, no more no less (1.1. 97-98).

The king is not satisfied with such a mere and unaffected answer due to his arrogance and strong sense of superiority. Thus, he makes a grave decision to exile Cordelia from his kingdom, and gives all of his land to Goneril and Regan, which leads to his tragic disappointment, emotional breakdown, and death, “Your old kind father, whose frank heart gave all! O, that way madness lies…” (3.4. 25-26). The ultimate power in the tragic world is distressed by the evil acts and decisions of the dramatic character. Then, this ultimate moral power must have an opposing reaction to the wickedness in order to repair the essential order of the universe.

Another aspect of the evil power that A. C. Bradley conveys in his article, The Shakespearean Tragic Hero, is that evil reveals itself everywhere as a negative, weakening, destructive effect. “It isolates, disunites, and tends to annihilate not only its opposite but itself” (A. C. Bradley 690). The evil effect in King Lear spreads and poisons lives of all soul characters, causing death and destruction in the play. Goneril and Regan are also affected by their own wickedness, “Each jealous of the other…” (5.1. 67). Due to their selfishness and sinister nature, the two sisters try to raze one another in their competition for power and control. In conclusion, Goneril poisons her sister in the sake of winning Edmund’s favour. Nevertheless, Edmund is retributed by his brother, Edgar, who slays him in a fair fight. Goneril, who is not able to abide her disgraceful downfall, commits suicide.

Although, these characters die, the reader does feel pity for them because their death is necessary factor of retribution in a tragic play, “This judgment of the heavens, that makes us tremble, Touches us not with pity” (5.3. 275-276). If there was no punishment for evil performance and immoral behavior, then evil power would predominate the world, and there would be no means for the moral order to exist among the humanity,If that the heavens do not their visible spiritsSend quickly down to tame these vile offenses,It will come,Humanity must perforce prey on itself,Like monsters of the deep (Act IV, Scene 2, 52-56).

Hence, the existence of the ultimate moral order in the tragic world fundamentally depends on the goodness of humanity. Since the tenor of evil is belligerent and destructive to such an existence, then, people of the universe must yield to good.

In essence, the power of the moral order presents the revenge and the concept of justice in the tragic world. Therefore, it suggests the idea of fate. Still, although the retribution is served, there is no indication of “poetic justice”. Moral order functions according to its righteous nature. It reacts to the attack of the evil force in order to sustain and balance itself. During this equilibration, evil is isolated and goodness triumphs over the tragic world. 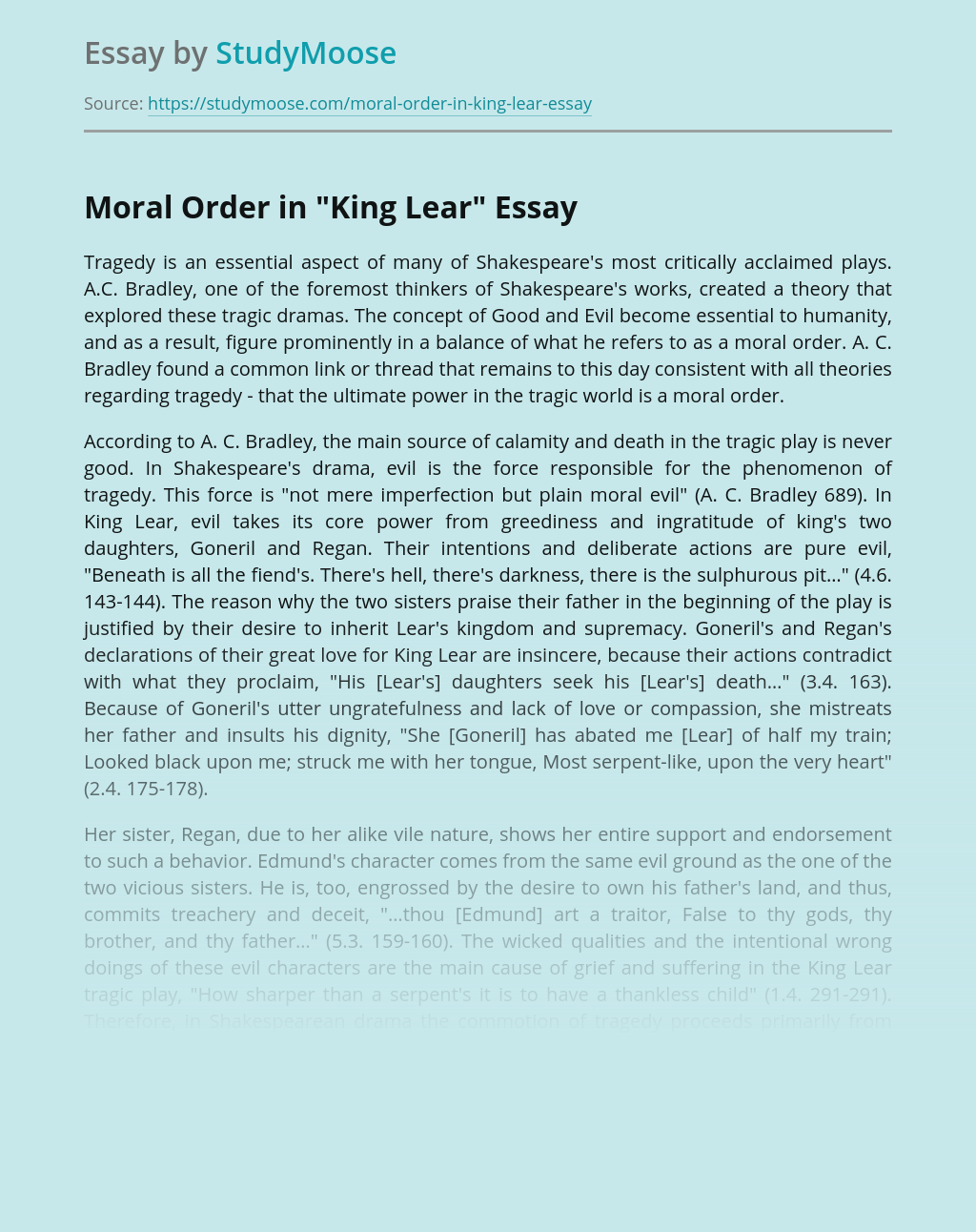