The little prince, Hope for the flower, and Jonathan Livingston Seagull are stories that can bring an everlasting moral lessons in LIFE. These are stories with a philosophical implication, the works of the authors Antoine de Saint-Exupery, Trina Paulos and Richard Bach are devoted to a discussion of the sort of questions normally addressed in way of life. I said so because all the stories give emphasis to the function and role of the society, and also the purpose of life.

Don't use plagiarized sources. Get your custom essay on
“ Moral Lessons In LIFE ”
Get custom paper
NEW! smart matching with writer

Moreover, the tree stories are considered in the category of literary allegory and fable. An Allegory, according to our handout (Introduction to Literature, p vii), is a prose form in which the characters, ideas and actions stands for something else or for a system of ideas with meaning implied. Further, it is a symbolic story that can be transparently interpreted, such as in the story of The little prince the rose as a particular woman in the prince life, in Hope for the flower the pile of squirming, pushing caterpillars as a opponents or competitors while in Jonathan Livingston seagull the flock as a family.

A fable, on the other hand, is a short allegorical tale conveying moral or principle of behavior, the characters are usually animals talking like human beings but keeping their animal traits. Other than animals it may include mythical creatures, plants, objects, or forces of nature in which are humanized and teach a moral. Like in The little prince so many characters that conveyed different lessons to the reader; the rose, the fox, the snake, the baobabs, the stars, the Turkish astronomer and also the prince itself.

In the Hope to the flower, the grey haired caterpillar teaches the essence of becoming what you are meant to be. While in the Jonathan Livingston seagull a fable about following your dreams even if it means going against the flock.

Therefore, the story of The Little Prince, Hope for the Flower, and Jonathan Livingston Seagull has been described as an allegory and a fable that authors make us understand and realize the important in life and it represents some of the many roles of aspect in life such as honesty, loneliness, hate, success, love, compassion, fear, and regret.

What lesson did you learn from each story?

This story convey many lessons, from the little prince journey we can learned not to be like the other grown-ups in the story. That we shouldn’t be like a king who rules the things that are not to be ruled, a conceited man who is self-centered, a tippler who is lazy doing nothing but to drink liquor, a business man who is always aiming to become rich and we shouldn’t be a geographer who doesn’t have time to look around and sees what lies ahead in his world.

I’ve also learned from the fox that inspiring other is having a friend. And the message that catches my attention was his secret, the very simple secret “It is only with the heart that once can see rightly, what is essential is invisible to the eye.” which means that we can attain happiness by what we can’t see by our naked eyes. In short, not the material things that we own but the great feeling of being together with someone and that’s the happiest thing in life.

From the pilot, made me realize that children and grown-ups are never the same even though grown-ups undergone childhoods. And as to the prince I’ve learned that in this human race we meet different kinds of persons and that there are some who are like from the six asteroids wherein we can’t find out what we are looking for in them and they are just acquaintance, while the snake as those strange people who will just fool us and the fox who become our friends. He also made me picture out how would search for things that would make me happy in life.

Hope for the flower

It is a good story about finding yourself when you don’t know why you are doing what you are doing. It’s not about doing what has to be done but knowing and understanding why it’s done, rather than doing just for the sake of doing. I’ve discover what really matter in life is to become what we are meant to be. I’ve learned that the only way to the top is to fly and the way to fly is simple, be true to yourself, looking around you and knowing there is something more in life. It also inspires me not to give up hope, I should learn from my mistake and not to give up just because I’m embarrassed to what I’ve done. There’s always another option to find what you are looking for and that there are people around you that will help you to reach your goal just give them meaning to your life.

A story that adult could definitely learn from. It is stories that will give you hope of wanting to excel, wants to push yourself and wants to be more, to be all that you can be. It will remind me of having self-determination like Jonathan who bore lies and twisted truths, success and failure that no matter what happened, he kept after his search of freedom of his true self and also it remind me that nothing can be achieved without practice. And also it inspires me to follow my dreams even if it means going against the norm of the flock and so that I can soar too. 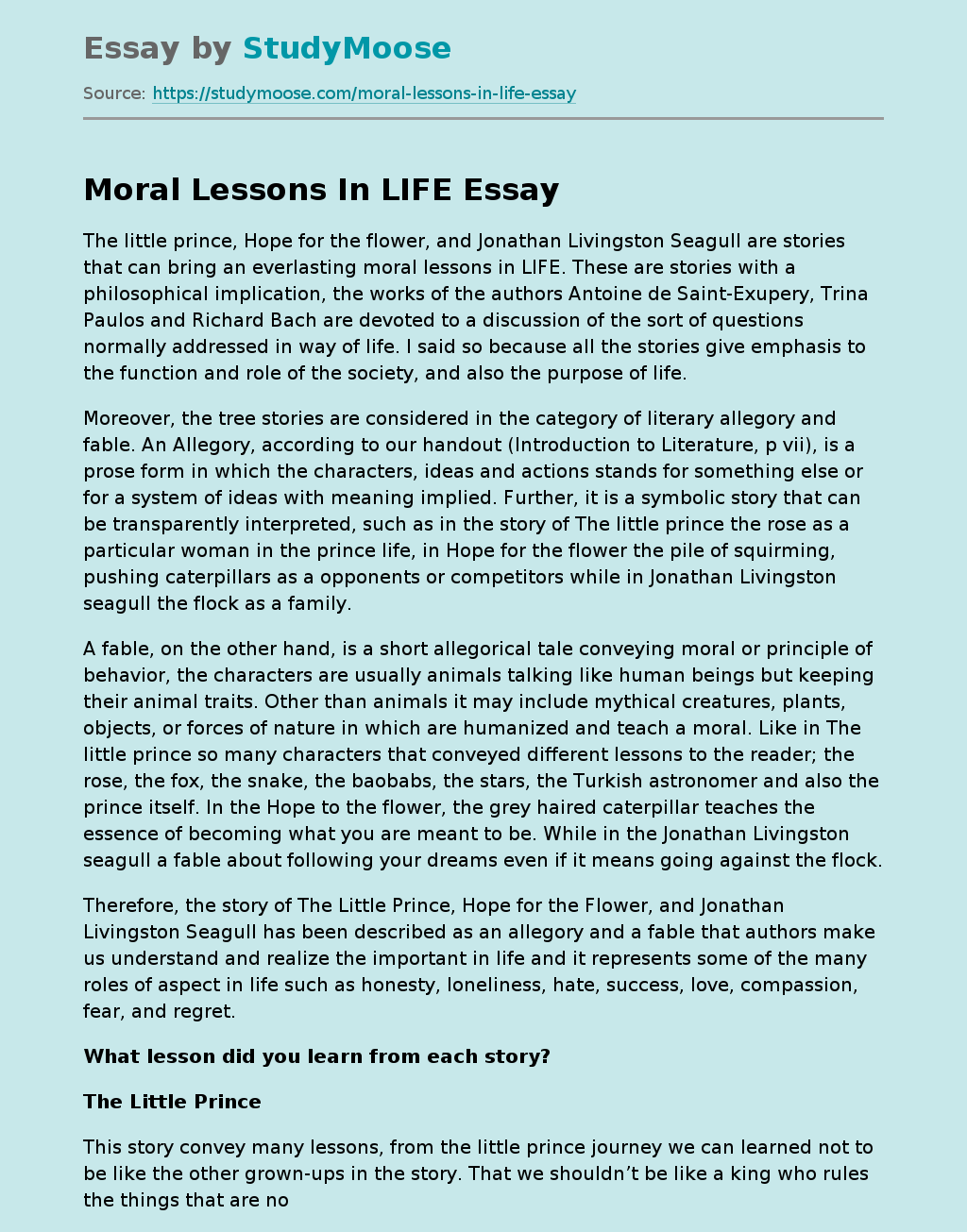