The source that I chose was Incidents in the Life of a Slave Girl, the Narrative of Harriet Jacobs. This document depicts the many trials that Harriet endured in her life as a slave in hopes that she might bring to light the horrible pit of abomination and sin that slavery is. She laces the story with vivid details of sexual abuse and mistreatment that purely rapture the reader in either absolute shock or utter horror. The very fact that is thrust upon us is that there were members of the white civilization who cast themselves so low as to treat another human being in such a foul and unforgivable manner.

Don't use plagiarized sources. Get your custom essay on
“ Moral Experience in Harriet Jacobs’s “Incidents in the Life of a Slave Girl” ”
Get custom paper
NEW! smart matching with writer

I believe quite simply that by writing this very honest and exposing narrative of her life, that Harriet Jacob’s only intention was to raise awareness for other slaves who were quite possibly in worse situations than herself. Sometimes America needs a little bit of a wake-up call, and I think that’s what Harriet Jacob was trying to accomplish by compiling a book of incidents throughout her life and details of slave’s life that she felt that the general white public was otherwise unaware of.

Facts and stories she felt would most certainly draw the attention of the readers, and if not change their entire perspectives on slavery at least implant the slightest of doubts that would creep into the crevices of their very thoughts every waking hour as they participated treacherously in these abominable behaviors. To be called out in one’s very own actions is to inflame the most unbearable of guilt.

This document focuses on the injustices offered towards the slaves in the South, the information presented throughout the reading weaves itself into the history leading up to the Civil war. She argues that slavery destroys the morality of slaveholders, almost without exception or deviation in that fact. With no legal checks on their behavior, they inflict every conceivable kind of torture on their servants.

Most slave masters view slaves as little more than animals or objects, never acknowledging their humanity. They are merely something that they hold “possession” over, or “own”. But even ‘kindly’ slaveholders, such as Mr. Sands, show themselves capable of betraying their slaves when it is convenient, profitable, or suites their needs. Mr. Sands promises to free his slave children and may even intend to do so at first. However, in the slave system, such good intentions are easily forgotten. If a slave owner such as Mr. Sands ever comes across financial problems, he will likely be tempted to sell his own children to get himself out of trouble. Thus, slavery distorts even the most basic and fundamental emotional instinct: the love of a parent for a child.

It has come to my attention, however, that not only the morality of slave-holders was negatively affected, but the moral development of the slaves themselves was affected throughout the slave-trade as well. Throughout the document, Linda does not condemn the slaves for committing theft or adultery because a lot of the time it wasn’t their fault. Along the same lines, she points out that this is no fault of their own because through this system they are given no ownership of themselves or their actions. It is the system that dehumanizes the slaves.
At the end of Incidents in the Life of a Slave Girl, Linda states that she is still waiting to have her greatest dream fulfilled—that of creating a real home for herself and her children. That desire to have a comfortable home without the shadow of fear could be reflecting the cult of domesticity that would have been familiar and standard to the women in Harriet Jacob’s time. During this time period, it was the women who regulated the home environment and were expected to find all of their fulfillment in caring for a family and a home.

Women were considered to be homemakers and housewives simply by nature, that was their purpose in life, and that they were unfit for any other role in the economic system. On the other hand, black women were excluded from this value system and were often not even allowed to live with their children, so Linda’s longing for home is most definitely understandable.

As a slave with a relatively “easy” life, Linda did not have to endure constant beatings and hard physical labor that the slave life normally offered. However, she and many of the other slaves around her suffered greatly from being denied basic human rights and legal protection. Men and women are not permitted to marry whomever they chose, they often were not allowed to even marry at all. Women were frequently forced to sleep with the masters they despise. Worst of all, families have torn apart, with children being sold to a place far away from their parents. Thus, even slaves who were not beaten or starved were stripped and deprived of their humanity.

Harriet Jacob honestly expresses how she would have preferred to have been a hard-working and labor farmhand than a “pampered” slave girl because to beat would have been better than to have endured the torture that she had undergone.

During one point in the novel, Linda locks herself in the attic. I find while pondering what that means that a lot of times people lock themselves in an ‘attic’, per se. They choose that confinement because it offers a sort of ignorance to facts that perhaps they do not wish to acknowledge and would prefer to escape from. It proves to be a blissful existence in most terms because they lack the weight of everyday life, however, in the long run, this state of mind quite simply separates the person from all of society. One cannot exist in society without becoming one with society.

I found while reading this document that significance purely depended on the mindset in which I chose to dive into each chapter. I discovered that the straightforward honesty that is presented throughout each chapter is what makes it so significant. The fact that she would put herself out there and openly tell her story is what truly struck me, it left me with this idea that as we go through experiences we should share them and that even if our opinions vary from that of the world around us at the time, like Harriet Jacobs, we should share those differing opinions so that we can awaken contemplation in those of whom we share those experiences with.

Moral Experience in Harriet Jacobs's "Incidents in the Life of a Slave Girl". (2020, Oct 30). Retrieved from https://studymoose.com/moral-experience-in-harriet-jacobs-s-incidents-in-the-life-of-a-slave-girl-essay?post 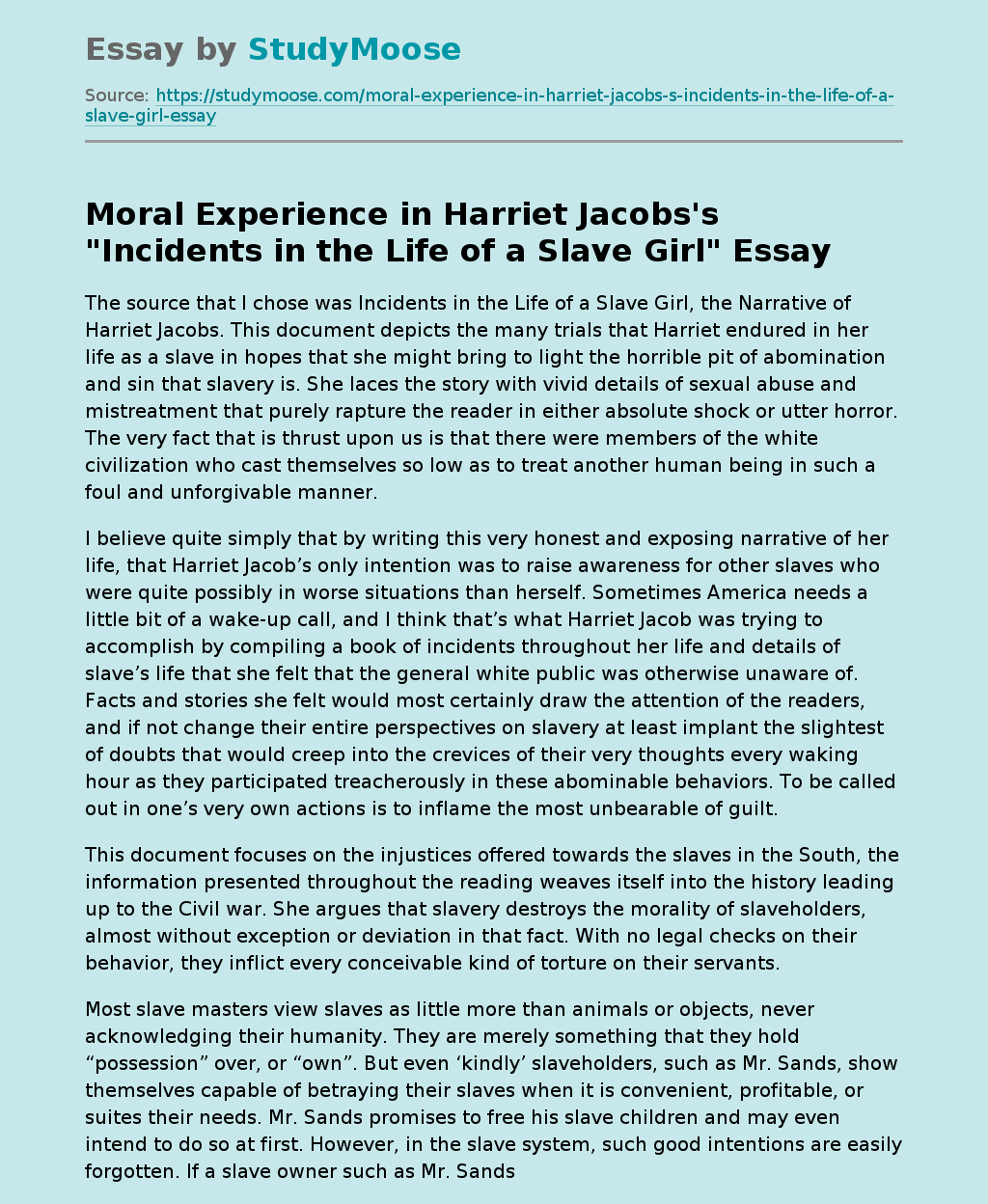