Monument 14 was published on June 5, 2012 and was written by Emmy Laybourne. Monument 14 was Emmy’s debut fictional book, she began writing it after she retired from acting in movies such as Superstar and The In-Laws. After writing Monument 14 she decided she enjoyed writing and began publishing more books in the Monument 14 series. She then moved onto the Sweet series of books.

Emmy named her book Monument 14 after the fact that the story is about 14 children in Monument, Colorado. The book contains lots of different kinds of characters.

Don't use plagiarized sources. Get your custom essay on
“ Monument 14 Book Report ”
Get custom paper
NEW! smart matching with writer

Dean is the book’s main character. He is an outcast and is frequently bullied throughout the book.

Astrid is athletic and beautiful. She is Dean’s crush throughout the book. Alex, Dean’s brother, is a technical genius. He becomes the vice president of the group under the president, Niko, a wilderness man who is the leader of the group. Niko has a crush on Josie, who is kind and good with kids.

Josie’s in love Brayden, who is rude and rich, and enjoys getting drunk with Jake, the star football player at the school. Brayden is very bad with the kids, and like Dean, he is in love with Astrid.

There’s also Mrs. Wooly, who saves many kids in the beginning of the book but soon leaves, never to be seen again. Then there’s the rebel Sahalia, who looked up to Robbie until he tried to rape her. Robbie is a bad man who was shot and killed soon after his introduction.

Finally, there’s Mr. Apple, a half decent man who came with Robbie and is kicked out of the Greenway grocery store after Robbie is killed.

The book is a post-apocalyptic novel set inside of a Greenway, a grocery store much like Walmart, after a hail storm causes an explosion at a nearby power plant. The store is very dull and gets more and more dirty as the story goes on. The Greenway is filled with food and necessities needed for survival, but kids being kids, they end up going on a sweets-only diet.

The kids have to put up plastic and metal around the vents and doors so that the poisonous air from the power plant cannot get into the building. As the story unfolds, the kids divide into groups, and conflicts begin. They end up letting some random strangers into the store, which turns out to be a big mistake.

One important theme in the book is that appearances can be deceiving. For example, Jake seems like a great guy in the beginning of the book but turns out being a terrible person by the end. On the other hand, there is Dean, who in the beginning seems to be just a quiet kid. As the story progresses, he shows himself to be a hero.

Another major theme is that everyone has hidden talents. Throughout the book, the kids solve problems using all of their special skills. Niko, for example, has wilderness survival skills. These come in handy when a kid is injured. There’s also Alex, who is very good with technology. When there is a problem with the store’s power, he is able to fix it with ease.

Laybourne uses symbols throughout the book to signify hidden meanings and larger ideas. For example, the store’s walls represent how fragile life can be. As the book progresses, the kids are in constant fear that the dangerous gasses will get into the Greenway. Likewise, the adults are a frequent symbol of false hope. Every time an adult comes around, the kids get excited and think that they’re saved. They soon realise that there is no help coming.

The author uses many literary devices that make this book unique. Laybourne writes in a journalistic form, which provides a realistic feel. She also uses echos of classics such as Lord of the Flies and Stephen King’s The Stand. In both books humans dividing into factions after a disaster. Third, the author writes in the language of teenagers, which gives the characters a more natural feel.

I would recommend this book to my friends because it is fun to read and is filled with suspense. I like page 241 through page 252 the most. They are insanely intense and left me on the edge of my seat the whole time I was reading them. 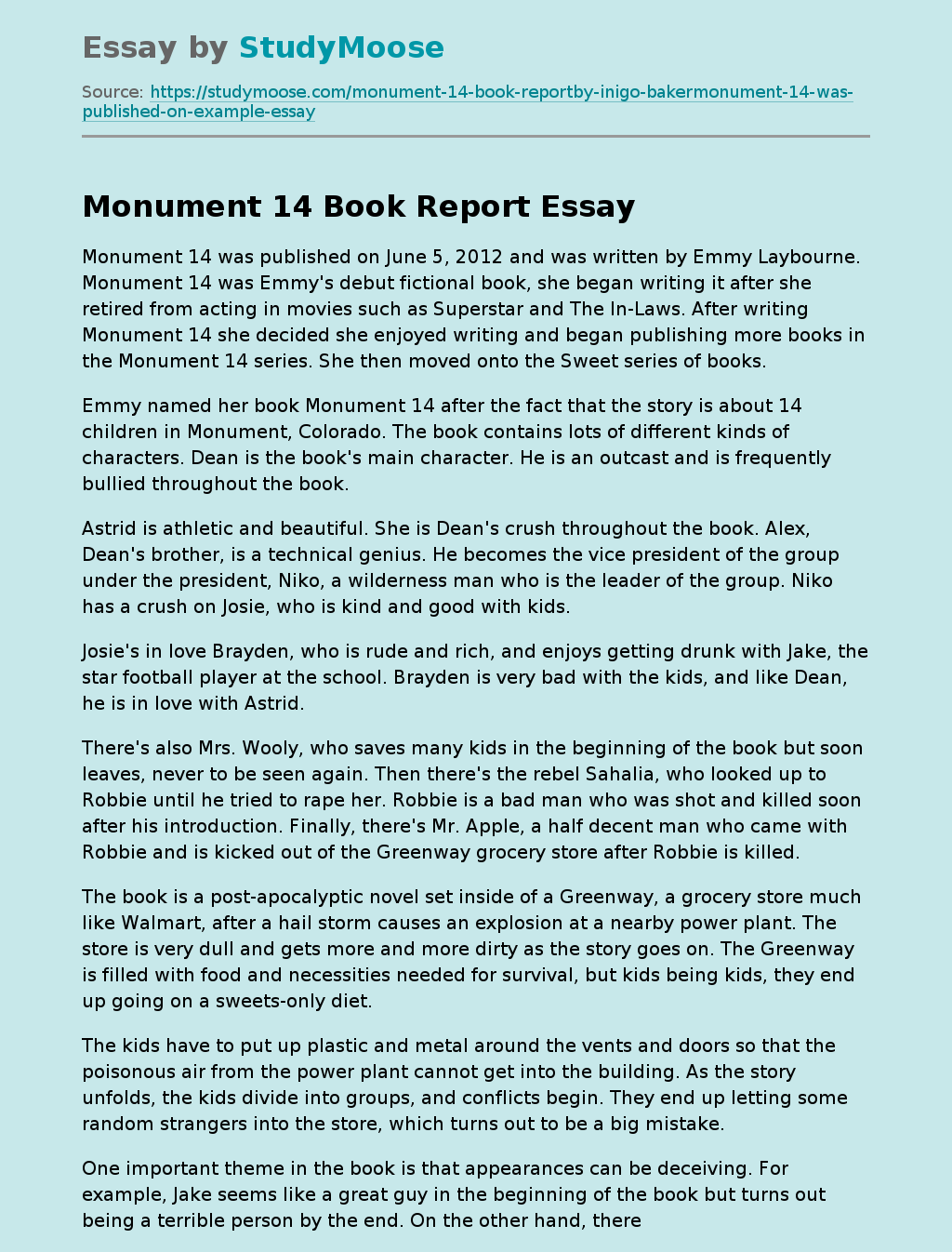