T. P. on “Monologue”, by Hone Tuwhare a) The person in this poem is a factory worker. Actually, he works in a steel factory. He likes to work near the door, with his work-bench and a locker handy. He emphasizes the fact that he is near the door, probably because the door is a synonym for freedom, hope or even escape for him. There are lots clamorous machines in the place, as well as people doing different kind of activities, such as kneading, shaping and putting things altogether.

Don't use plagiarized sources.
Get Your Custom Essay on Monologue, by Hone Tuwhare Just from $13,9/Page

As he is near the door, he can always talk to people who go into the factory looking for a job.

He puts in his shoes and is kind and helpful to them, because, somehow he is in the same condition as they are. Also, working near to the big door involves being the farthest away from his bosses. b) There are many kinds of imagery. As for sensitive images, the place is described chilly and gloomy in winter, and as hottish in summer, when the dust enters and obstructs the workers’ noses.

Secondly, auditory images are used to describe how the machines that are used turn the factory into a thundering site: “A noisy place with [… ] machines thumping and thrusting”.

Visual images are also employed in the poem, for example, when the writer describes the big doors, the smoke rising, or what the workers are doing in the factory. c) In our opinion, the worker has mixed feelings about this place. On one hand he tolerates it because it is his job and he earns a living by doing it: “I put up with it”, he says. Besides, he appreciates being near the doors, and that makes he feel really lucky; on the other hand, he is afraid of it. As we see it, he needs the doors to be there in case he has to escape, as if he were predicting that something bad is going to happen.

Besides, he may be afraid, trying to avoid them as far as he can, that is why he loves his position. e) The person’s good disposition towards prospective employees comes to light when the writer explains how he helps them. “I give them as much information as they require, direct them to the offices, and acknowledge the casual recognition that one worker signs to another”. He is assistive and cooperative and he might want to give a good image to his bosses, so they do not move him from his place. The reason hinted my be that he tries to do his best so no one can replace him in that position near the door.

f) The impact of seeing strangers being turned down for a job is described very well by the author of the poem, and the order of words in his sentence helps to put the message across to the reader. It would not be the same if he had described the feelings of the people who are turned down first and those of the ones who get the job afterwards, because the last part we read is what stays in our head more clearly. So, by describing the feeling of disappointment in the end, we get the idea more effectively.

g) The person who works at the factory has been there for fifteen months, so he knows pretty well how things work there. He knows that he has been hanging in there for a long time now, but that situation may not last, as new workers may come to the factory and the previous staff will reduce in number. This person does not take his job for granted, as the only lasting thing that people are sure to have is death. h) The speaker seems to be a rather insecure person, who tries to be optimistic but is beaten by the facts that reality shows him: that he may be fired.

So, even though he has not been asked to leave his job, he is already thinking what he will do if the before the axe falls, and he finds his head “cut off”. Maybe this is why he is constantly mentioning the fact that he works near the main door (the nearest part to the outside of the factory): he considers himself to be with one foot in and one foot out of his job. i) The narrator is remarking that he is comfortable working near the door, maybe because the steal factory is about to close down.

He feels that being near the door gives him a feeling of security, as it will help him if one day he has to escape from it. I believe that it is a suitable ending to the poem because it expresses through it the positive aspects that he has in the factory by being near the door and it says that if the factory closes down or “dyes” he will have the opportunity to escape from the disaster. j) Reasons given for sitting near the main door. * He is farthest away form those who have to come down to shout instructions in his ear.

If we read between the lines, he also likes his position because the factory is dying. Being there also implies being near freedom and escape. He can save his life and future if something goes wrong in the factory, which is higly possibly because of its deplorable situation. Cleia Antonelli, Laura Giglio, Eliana Gomez Balaguer & Tomas Reggiani 21/04 Show preview only The above preview is unformatted text This student written piece of work is one of many that can be found in our GCSE Miscellaneous section. 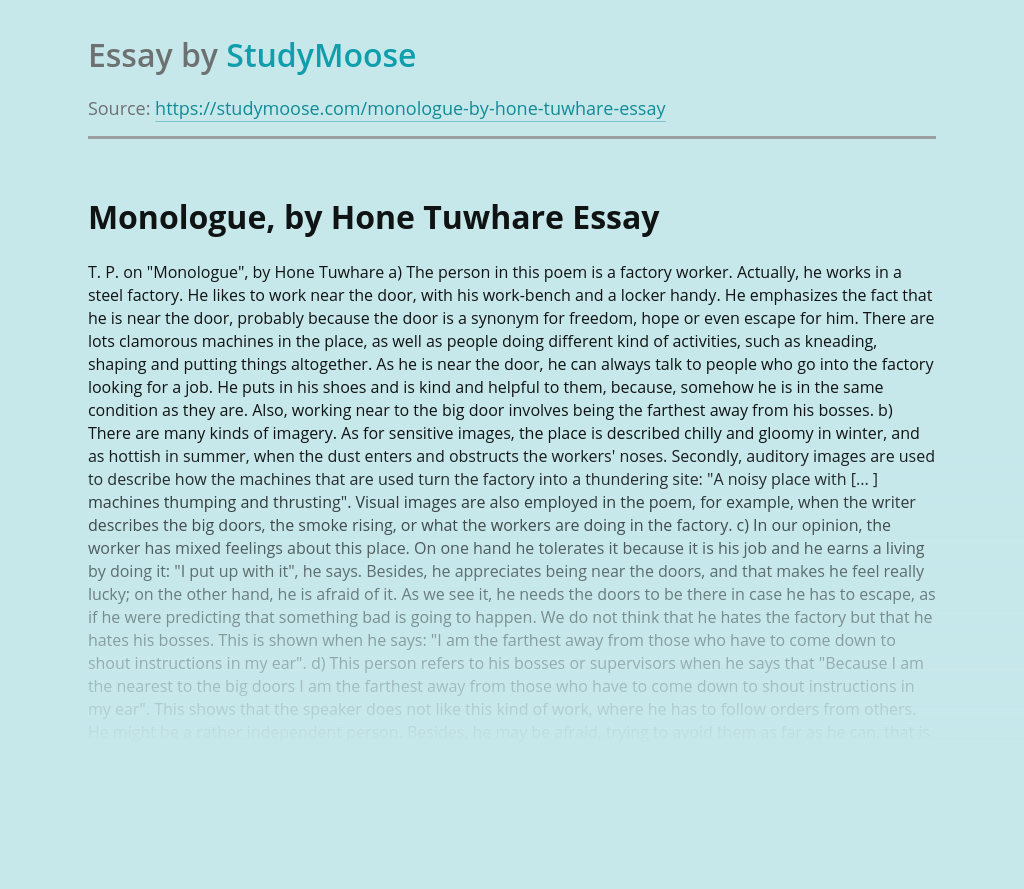 The marketing management philosophy that holds that achieving organizational goals depends on determining the needs and wants of target markets and delivering the desired satisfactions more effectively and efficiently than competitors do. The Selling Concept. This is another common business orientation. It holds that consumers and businesses, if left alone, will ordinarily not buy enough...

NAME: PURVI NILESHKUMAR PATELID: 653010COURSE: BUS 4015A: SUPPLY CHAIN MANAGEMENTSEMESTER: SUMMER 2019TASK: ASSIGNMENT ONE INSTRUCTOR: MAINA MUCHARA1) First its smallware, its direct distribution is in the urban centre, Florida that helps manage the delivery part to the restaurants by business organization and additionally lower prices in inventory. It also ensures there is uniformity and quality...

A three-time All-American halfback and 1961 Heisman Trophy winner, Ernie Davis would go on to win MVP title in both the Cotton Bowl and the Liberty Bowl, and was inducted into the College Football Hall Of Fame in 1979. He was the first African American man to win the Heisman Trophy, and to be picked...

Areas of growth and decline in the primary, secondary and tertiary classifications of business activities Firstly the primary sector, obtain or produces raw goods. The secondary sector manufactures and constructs goods. Finally the tertiary sector provides services to businesses and/or individuals. Over time whole sectors can grow or decline. Absolute growth or decline means that...

Introduction Monitoring is the systematic collection and analysis of information as a project progress. It is aimed at improving the efficiency and effectiveness of a project or organization. It is based on targets set and activities planned during the planning phases of work. It helps to keep the works on track and can let management...