“Money Madness” - a critical evaluation of the rush

“Money Madness” by D. H. Lawrence is a critical evaluation of the rush after affluences that is visible all around us in this Modern Day World. Money has become a powerful player in societies of today and holds more importance than anything else in the modern day lifestyle. The poet, through his pen, has tried to exemplify this situation and present the social and moral degradation that such madness for a thing so materialistic renders. The poet says that wherever we look there is madness for money; infact money can be termed as a metaphor for the word madness.

Turn in your highest-quality paper
Get a qualified writer to help you with
“ “Money Madness” – a critical evaluation of the rush ”
Get high-quality paper
NEW! AI matching with writer

And this madness is not on small or individualistic levels; it is the madness of the multitude, in numbers unimaginable and at levels incredible. And since the multitude as a whole is mad, so every person in this world carries his share of this madness– his share of this insane race after money. The poet doubts that there exists a human in this world who hands out a pound note to someone without feeling a pang at heart.

No matter how noble he may feel while giving away that note, his heart always wishes if only he could do all that good without having to take out a note from his own pocket.

And when that note turns to a ten-pound note, we experience real tremors within us. We tremble from inside while giving away that note, as if we have been robbed. Money makes us kneel infront of itself. It makes us fearful, and a sense of apprehension and stress grips us as we try to overcome a loss as materialistic and small as ten-pounds.

It has an exaggerating power to influence our life. But in the broader sense, it is not the money that we terrified of.

But it is the madness that mankind shows for it– the multitude madness– that gives money such an undeserved status in the society of today. And from here arises the feeling that money is all that matters today; it means peace, of body and of mind. Every time the society sees the man, no one cares for his moral values and behavior. All that decides his social status is that how much is he worth? If he has no money, then he well deserves all the guilt, criticism and blame that comes with poverty. Let him go cold, says the society.

The poet goes on to say that if one has no money, the World would give him little money, only enough to perhaps buy a piece of bread, in the name of humanity. But even this small offering doesn’t come for free. He has to eat dirt to get it, suffering through pains unheard and criticisms unparalleled. The poet says it is this pitiful and inhumane situation that he is afraid of. He fears that such madness for money might result in the world going completely insane. It is this fear of money-mad fellow-men going into a state of delirium that resides within him.

If we are to save ourselves from humiliations, criticism, guilt, and blames in this modern day world, we must have money. Because money parallels power. And the poet strongly criticizes such a morally and socially degraded state of the Modern day society. He proclaims that bread, shelter, and fire should be free, to anybody and everybody all over the world. We must regain our sanity when it comes to money. We must replace our madness with logic. Otherwise soon enough we will start killing one another for the sake of money. It is either one way or the other.

“Money Madness” - a critical evaluation of the rush. (2016, Jul 10). Retrieved from https://studymoose.com/money-madness-essay 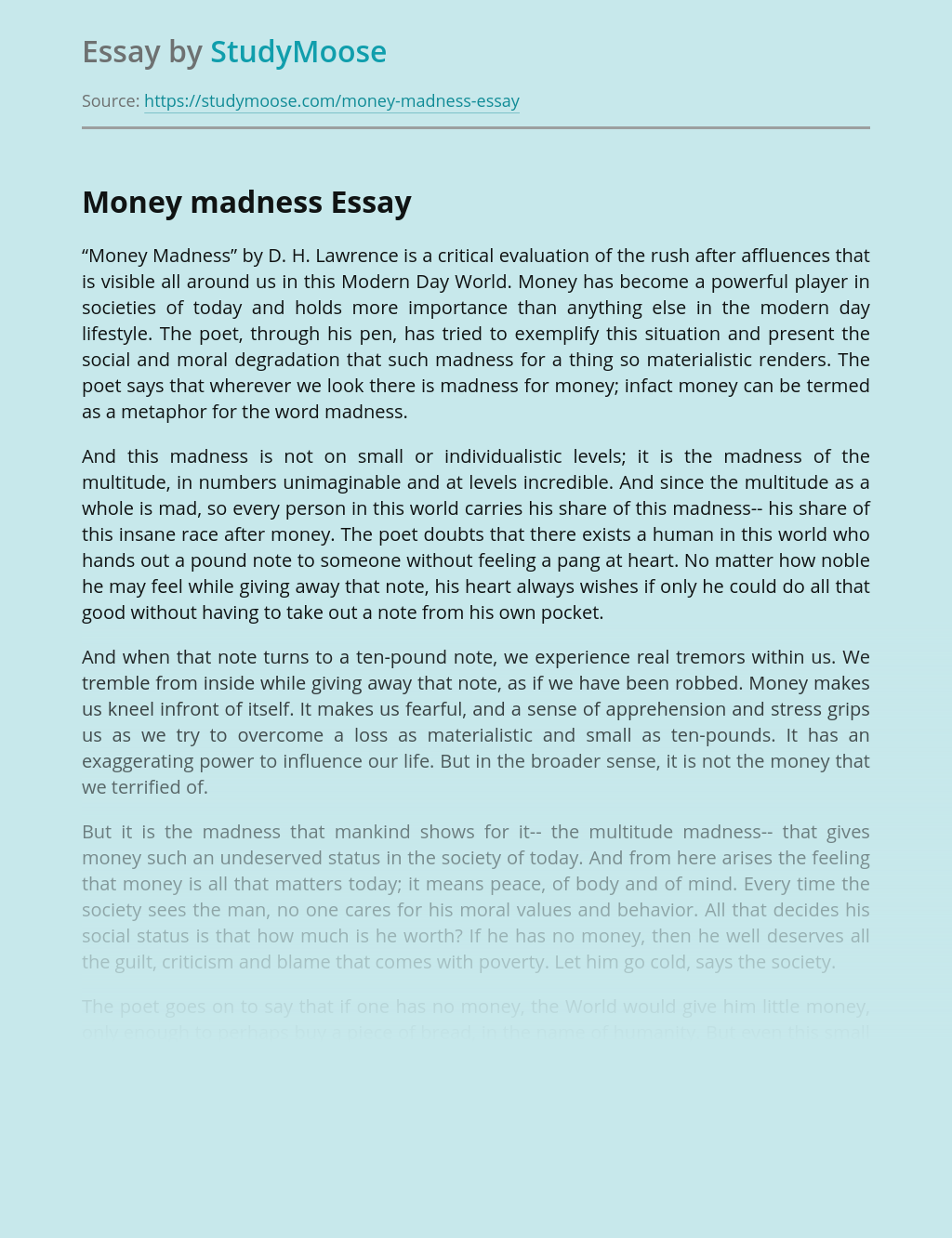 Turn in your highest-quality paper
Get a qualified writer to help you with
“ “Money Madness” – a critical evaluation of the rush ”
Get high-quality paper
Helping students since 2015
Stay Safe, Stay Original