Money Is It the Source of Happiness

The thought of money being the source of happiness is quite interesting. It is a fact that we need money to survive in this expensive economy, and without it we might tend to struggle. Money gives us the opportunity to buy clothes, food, shelter, and many other necessities of life. But does money truly bring happiness? Some may argue that money can make you happy and others will argue that it doesn’t. Why do some believe that money is the source of happiness?

I asked this question to a fellow colleague and she responded with a personal experience that she faces at home.

Don't use plagiarized sources. Get your custom essay on
“ Money Is It the Source of Happiness ”
Get custom paper
NEW! smart matching with writer

She said that life at home is usually happy and that arguing is rare, except for the times when her parents argue about money. She told me that her mother and father are always stressed about paying the bills and other expenses that come up each month. She ended with saying, “yes money can make you happy, because it can eliminate many stresses and problems that not having enough money can bring.

Others feel that money is a source of happiness because it allows them to enjoy the many opportunities and experiences that life has to offer. With money they are able to buy luxurious dream homes, the newest appliances and products, dine at the finest restaurants and travel around the world. Indeed, all these things can be a source of happiness, but is it long term happiness? Some may argue that they find happiness by sharing their money with others.

They gain personal satisfaction by sharing their fortune with those who are less fortunate.

Many wealthy people have donated hundreds of thousands of dollars to charities or have given some of their wealth as gifts to love ones. A study conducted by the Journal of Consumer Psychology concluded that people felt happier when they reflected on a time when they had spent money on others versus a time when they spent money on themselves. The study concluded that, “ if money doesn’t make you happy then you probably aren’t spending it right. ” On the other hand, many argue that money does not bring long term happiness, but is a quick fix that results in more problems.

A survey of lottery winners, for example, confirmed that lottery winners do experience initial elation after winning, but very soon that general sense of happiness returns to about what it was before they won. The winners even became unhappier when they quit their jobs and experienced lost relationships and a loss of sense of meaning and accomplishment. This was the experience of one single mother from the United Kingdom who won millions in the lottery. She lost all of her winnings in two years after going on extravagant shopping sprees.

She now works as a maid to support her family and pay back debt that she owes. She stated, “My life is a shambles and hopefully now it (the money) has all gone, I can find some happiness. It brought me nothing but unhappiness. It ruined my life. ” A study conducted by the University of Illinois stated that more than 30 percent of the richest people in America were not as happy as the person who earned a modest income. Why? Because happiness is not defined by our bank accounts or the things we possess. Happiness is a quality or state of being. It is a product of what makes you feel fulfilled.

No outside source, including money, can give you that. Another study in Psychology and Economics by the National Academy of Science suggested that people are happier as their income rises but only to a certain level. The study stated that once they are comfortable, which is around $75,000 annually, the state of happiness levels off. Sonja Lyumbomirsky, a wealthy stock broker said, “Once you’ve reached a level of comfort and have had the opportunity to drink the finest wines, fly in a private jet, and watch the super bowl from a box seat, you ask yourself, what now?

Clearly, having money has not resulted in true happiness for her. One main reason that money is not the source of happiness is man’s inborn flaw of greed. As humans, we always want more. We may say, “if only I made $100,000. 00 a year”, and when we achieve that goal, we are no longer satisfied and our desire goes up. There is never enough. The world also defines our success buy what we have materially and financially. Many spend much of their time in life trying to “keep up with the Jones”, so to speak.

And by doing so, they often find themselves stressed out and unhappy because they are trying to impress people they don’t like, with money they don’t have, on things they really don’t need. Others believe that if they had more money, they could spend more time with their family or do things they really want to do. Studies show, however, that those who take on more responsibility or work to earn more money, actually have less time for family, relaxation and recreation. The 2002 Nobel Peace Prize winner, Kahneman PHD, found the following as a result of his research:

1) Increased income has a small effect on life satisfaction. ) The wealthier people are, the more intense negative emotions they experience. 3) When countries experience a sudden increase in income, there is not a corresponding increase in its citizens’ sense of well being. Kahneman’s study did not link wealth with greater happiness in any way. Another study showed that in 1972, 30 percent of Americans said they were very happy. At that time, the average American earned about $25,000. 00 annually of our national income. In 2004, 32 years later, the average American income had increased to $38,000. 0, however the percent of Americans who said they were happy had virtually unchanged. Not only was this true in America, it was also true in other countries such as Japan.

Japan was basically a developing country in 1958 but had grown to be one of the richest countries in the world after World War II. The study showed that its citizens level of happiness did not change as it economy grew from a poor country to a thriving nation. There are many views and opinions on whether money can buy happiness.

Most will agree, however, that having enough money to live comfortably will increase our level of happiness, but having an abundance of money does not make one happier than those who have less. Happiness is not defined by the size of our financial portfolio but by what makes us feel fulfilled. To some, having lots of money is their source of fulfillment, to others it isn’t satisfying. They find more happiness in the smaller things in life such as spending time with their family members and friends. Money has a little role to play in that regard.

Money Is It the Source of Happiness. (2017, Jan 03). Retrieved from https://studymoose.com/money-is-it-the-source-of-happiness-essay 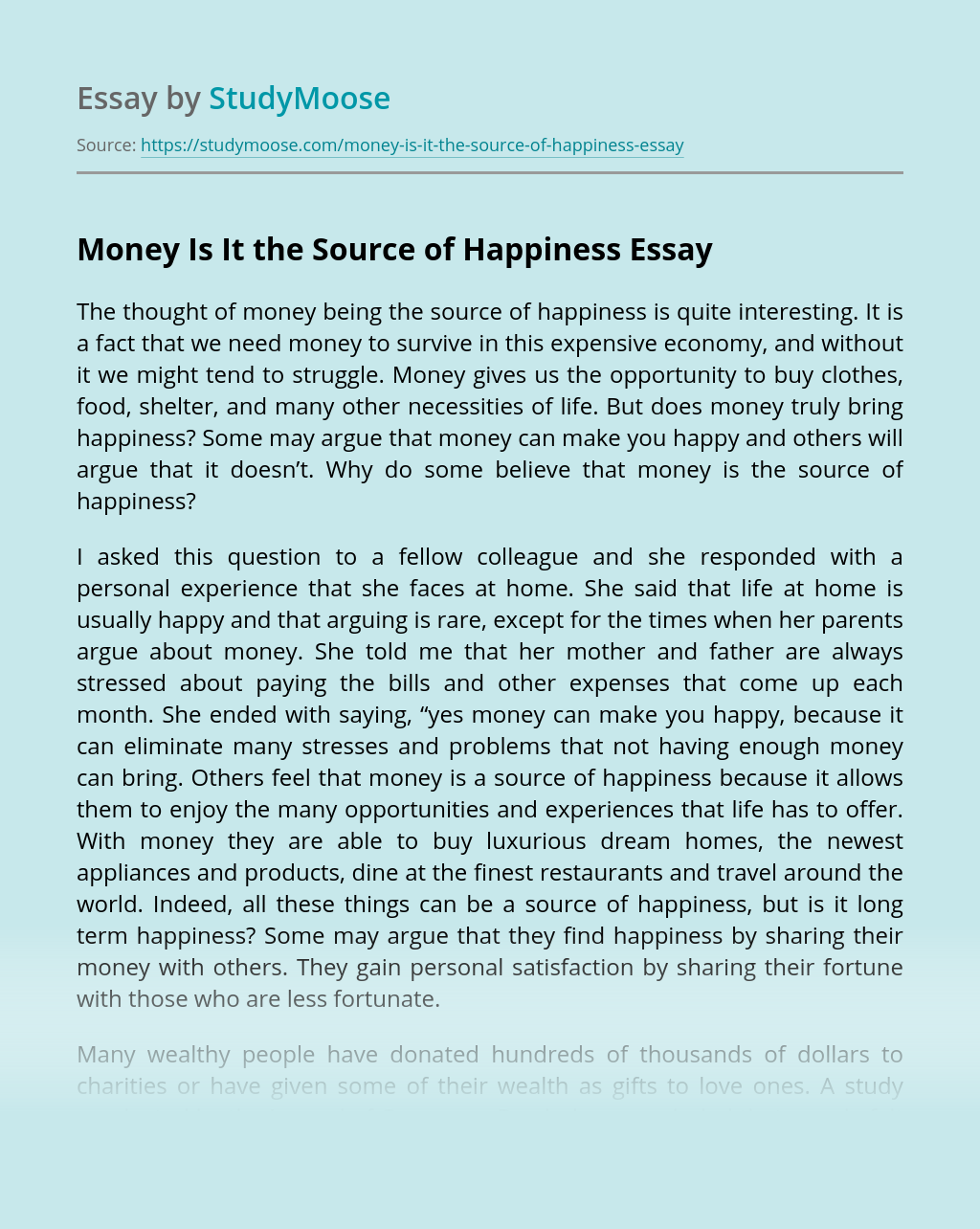