In order to fully understand the magnitude of post WW2 had on the USA economy and how the Federal Reserve Monetary policy contributed to it, we first must understand the role of the federal reserve, which is the central banking system of the United States of America. “It was created on December 23, 1913, with the enactment of the Federal Reserve Act, after a series of financial panics led to the desire for central control of the monetary system to alleviate financial crises.

”(Board,2019). With that said, the post-WW2 analysis starts to take place a little after the great depression which went through the 1930s and ended in 1939. Which consequently was the start of the WW2 when Germany invaded Poland in 1939. One can say that 1939 started the reaction of what would later take place for the USA economy. Yet the United States of America didn’t enter the war until 1941 and that is the start of the monetary policy from the Federal Reserve took place.

During that time the USA army was obsolete and small compared to its European counterparts. It took a little over a year to start deployment of there counter program in six different contents and the Federal Reserve bank played a key role in raising the money necessary to pay for such an army and update the industry to keep up with the demand.

The Federal Reserve Between, 1940 – 1945, helped the Government raised approximately 380 billion dollars. Which can be broken down into sections, first 153 billion dollars came from taxes and of the remainder, 228 billion, by borrowing.

In terms of borrowing, 133 billion came from selling Government securities to investors. The remaining 95 billion dollars was raised by selling to the commercial banking system (Fraser, 1945). Selling security bond or treasury bond is a policy used to allow the government to raise the capital needed to help fund several projects. In this case, it was used to help the US army to get ready for a war that required thousand of tanks, weapons and plans to be built for the duration of the war. Most of the financing of the war was organized and implemented by the Treasury and the Federal Reserve. Through United States government securities, through taxation and domestic borrowing. “They predicted that the level of inflationary pressures would be minimal, and it would also help promote economic expansion during the war, and promote economic stability when peace returned.” (Fraser, 1945). Some call the post-WW2 economic boom to be one of the greatest areas in American history. It set the stage of placing the USA as the world richest country with a respectable military.

Several other factors also must be noted, that after WW2 major countries lost most of there infrastructure and their ability to compete in the world market. Therefore, we must also take into consideration the fact the Monterey policy help the US economy to grow into the superpower that it is now, but currently we are starting to see other major countries getting close to becoming the world-leading superpower. Therefore, both internal and external factors lead to the great economic boom that USA experience post WW2 which will be discussed in the following sections below.

To start this section correctly, we first make take a look at some key factors of economic performance. Below there are two tables that are ranged from 1940 – 1950, to get a better understanding of how the Monetary policies affected the economy according. GDP, unemployment rate and Inflation are being evaluated, therefore look over the tables and I will discuss it further in the section below. (Amadeo, K, 2019)

Before moving forward, we must point out the set standards from the Treasury Bills that took place from April 1942 to July 1947. Helping us get a better understanding of the effects the securities bonds had on the economy. It was stated that “yields on three-month Treasury bills remained at three-eighths of one percent and yields on highest-grade corporate bonds drifted from 2.85% to 2.55%.”( Fraser. 1945). With this give tables we can see a trend, 1946 was a crucial moment in American history, it was right after WW2 and we can see the rate of inflation rise from 1945 = 2.20% to 1946 = 18.10%. In addition to the inflation rate rising unemployment went from 1.90% – 3.90% in the same period with a GDP growth rate of -1% to -11.6%. Now that we have a better understanding of the economic situation the USA was in during this time from 1940 – 1950. We can now start taking a closer look at 1944 – 1947, and what policies take place in order to counteract the inflation rate and GDP growth rate.

We will first take a look at 1944, which was a crucial point in the world economic policy. During this time 44 allied counties met in what is known as Bretton Wood, New Hampshire, to come with terms of a new system to help manage foreign exchange. The purpose of this system was to not put any country at a disadvantage and that the world currency wouldn’t be linked to gold, but rather linked to the U.S dollar. The international reserve currency, with the help of these 44 allied countries created a mechanism for the fixed exchange rate, linked to US dollar, which was signed 1944, making the U.S dollar the mores of the world exchanged currency in the world. (Fraser. 1945)

In the following year of 1945, marking the end of the Second World War in September, which in turn allowed the Bretton Woods System full reign. An additional, International Bank for Reconstruction and Development was founded that same year. With a fixed $35 per ounce of gold allowed the US dollar to become the international reserve currency that we all know of today. During the same time, the newly elected preset Truman was taking drastic steps to restabilize the economy post WW2. The New Deal was starting to take place, Truman presented in front of Congress a 22-point message attempting to tactical the economic agenda. With it came to what is known today as Truman’s call for “new public works programs, legislation guaranteeing ‘full employment,’ a higher minimum wage, extension of the Fair Employment Practices Committee or FEPC, a war-time agency that monitored discrimination against African Americans in hiring practices of government agencies and defense industries, a larger Social Security System, and a national health insurance system” (Harry S, 2017). This tied together with the demobilization of the military, which at the time was greatly anticipated many families clamored for the hasty return of the troops to civilian lives. In perspective, we can now see the effects of Truman’s actions and how these policies helped the US economy to bounce back. Yet for some time his policies and presidency were not popular among the people. At some point, he had an approved rating of 35%. These policies didn’t create an instant fix to the whole economy, but rather it slowly stimulated the economy for the following two years. Far more can be said about this period, but the main points have been clarified and the next period is the full negative effects of post WW2.

In 1946, the full negative effects of Post WW2 were in full swing. Unemployment was at its all-time highest since 1942. Inflection was at record high 18.10%, with that said market prices where high, leading to declining GDP growth. Even though several economic policies were in place, the full effect didn’t start to take place until 1947. Which we will take a closer look at in the next section.

The Cold War highlights the year 1947, it was the start of what would be known as one of the scariest times to be alive in the USA. The economy didn’t seem to get any better and many faired a nuclear war with Russia. With that said the start of the cold war also forced the USA to act more strategically in foreign affairs. Such as the IMF became operational, “acting as a supranational body to promote global monetary cooperation and provide loans to developing nations. The General Agreement on Tariffs and Trade was also signed to stimulate international trade.” (A history of foreign, 2019). This, in turn, would later turn into trouble because the system began as military spending, foreign aid and international investment, but now one can argue that this has the US overreaching and overspending in world affairs that don’t always turn into its favor. Nevertheless, this IMF played a key role in maintaining the peace worldwide. In addition to all these events taking place, the policies put into play during 1944-1946 were starting to take into effect. GDP Growth rate in 1946 was -11.6% and in 1947 it was -1.1%. Also, inflection dropped from 18.10% to 8.80%, which was one of many factors that were slowly improving under the leadership of Presented Truman.

One key area that I consider to be a crucial part of the overall growth of the world’s economy was The Marshall Plan. It can also be known as the European Recovery Program, which in simple terms was a U.S. program providing aid to Western Europe after the devastation of World War II. Created by the U.S. Secretary of State George C. Marshall, which in the latter year would be awarded the Nobel peace prize. This policy was enacted in the year 1948, granting more than 15 billion dollars in foreign aid, which allowed counties to rebuild industries and infrastructures that were destroyed after the war. At the same time creating a barrier west from east Europe, which at the time the USA was still in a Cold War with Russia. This four-year plan removed trading barriers allowing economic growth to the list of counties it helped. In some reports, it is stated that those counties that got aid to say an increase of GDP of up to 25%. One cannot understatement the importance of the Marshall Plan, which can be also contributed in the forming of the North Atlantic Treaty Organization (NATO), which is military allicin between North America and European Counties. (History.com, 2009)

It took the United States of America a little over 5 years to recover from WW2. In 1945 Real GDP was at $2.329 (Trillion), and not until 1950 Real GDP reached $2.290 (Trillion). At the same time in 1950 USA entered the Korean war, allowing the military budget to expand and lowering unemployment. Besides, GDP growth rate went from -1% to 8.7%, also the Inflation rate started to restabilize from 2.20% to 5.90%. Given all this information, one can say that it is amazing the basic understand of the amount of power Monetary Policy has on a given economy. It put into perspective the pollical tension we currently have in the United States. We often hear about a trade deal that is not in the favor of the US, and how leading economist argues the facts of facial and Monetary policies and their effects to our country. We now stand in a far more world connectivity market than ever before. The decision one country makes have a repeal affect on the world market. During this case study, it has highlighted the facts of a few well documented and implemented policy have to the world economy. Now taking a step back and looking at the current market, one can speculate that these discussions are far more important and crucial to the development of the US economy and the world. 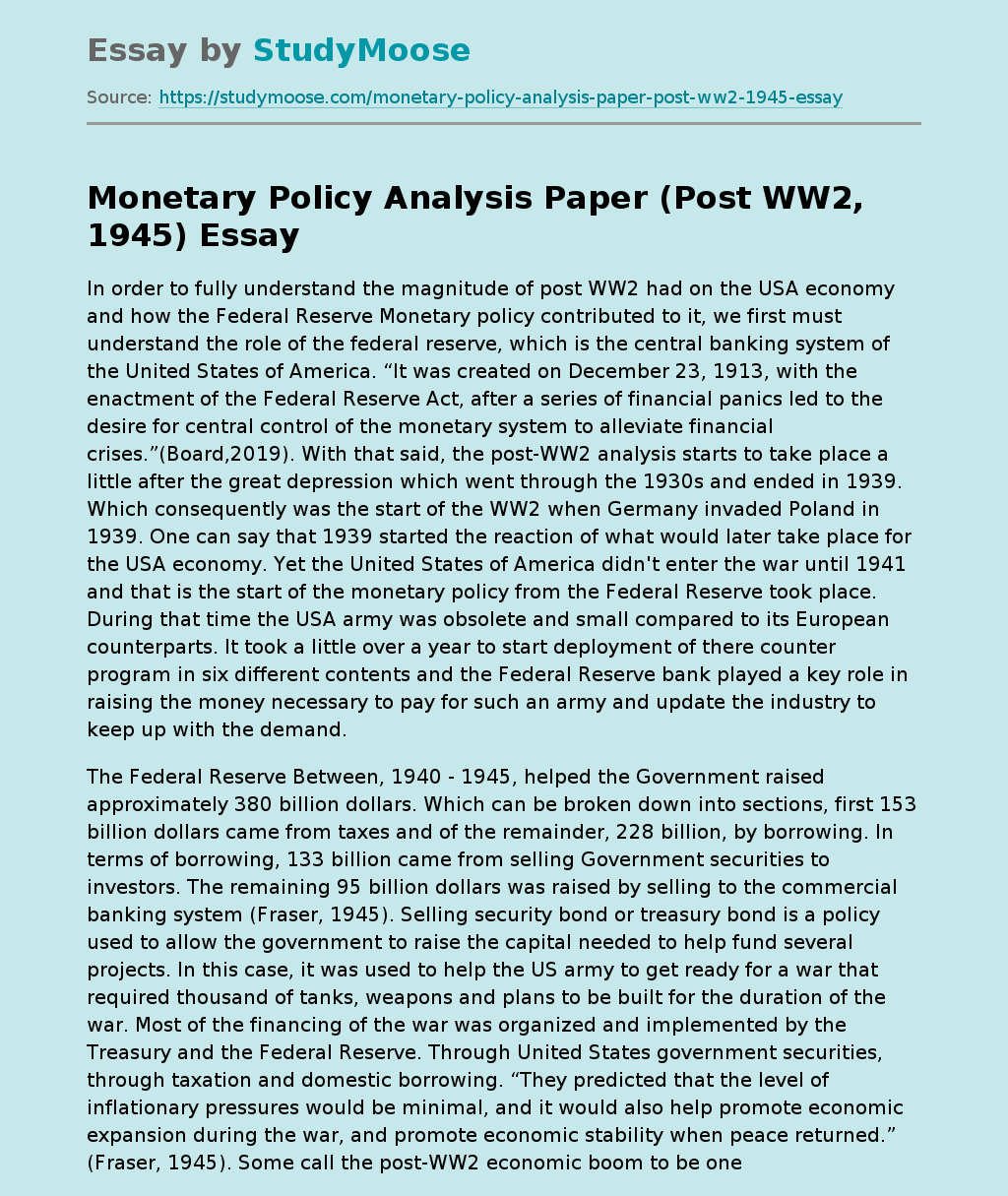