“Modern psychoanalysis” is a term coined by Hyman Spotnitz. “Influenced by the works of Sigmund Freud, Dr. Spotnitz believed that the principles of psychoanalysis could be extended to cure the severe narcissistic disorders that Freud had deemed untreatable. ” (Sara Sheftel, 1991) Dr. Spotnitz and his colleagues described it as a “body of theoretical and clinical approaches” that could be used to envelop the full spectrum of emotional disorders and broaden the potential for treatment to pathologies thought to be untreatable by conventional methods.

Don't use plagiarized sources. Get your custom essay on
“ Modern Psychoanalysis ”
Get custom paper
NEW! smart matching with writer

Modern psychoanalysis and other forms of psychotherapy are significantly different when compared to Freud’s concept of psychoanalysis back then. However, the popularity of the “talking cure” has remained present and people today actually realize that therapy works. When Freud first started treating patients this way, most people did not believe that simply talking about their problems would somehow fix physical issues too. Modern psychoanalysis takes Freud’s basic theory of human psyche and use it as its starting point.

Modern psychoanalysis differs from other methods of psychoanalysis by following Freud’s later work and the work of Melanie Klein in stressing the importance of dealing with destructive behaviors as well as sexual motivation in order for the human psyche to evolve. (Pickren, 2010) Like all psychoanalysts, modern psychoanalysts emphasize the unconscious nature of much of human motivation, the impact of the early development of mental functioning on later functioning, and the tendency of people to repeat patterns of handling emotional arousal states.

Also similar to other schools of psychoanalysis, modern psychoanalytic treatment emphasizes helping the patient talk progressively, working on resolving resistance to putting everything into words and on analyzing the transference of repetitive emotional patterns experienced with the analyst.

(New England Association Schools and Colleges, 2010) But we cannot deny the influence Freud has had upon thinking in the 20th and 21st centuries. This has spread throughout Western culture and into the international creative arts.

His thoughts can be observed in art, literature, cinema and the stage. Notions of identity, memory, childhood, sexuality, and of meaning have been shaped in relation to – and often in opposition to – Freud’s work. No doubt this influence will continue into the future. Psychoanalysis gained more popularity after Freud’s death, but then decreased in popularity again in the modern world. People today are looking for a type of “fast food, drive-thru” style of treatment. Therapy using psychoanalysis requires using a much longer amount of time than our society today have the patience for.

Less lengthy forms of psychotherapy is preferred today, such as psycho-dynamics, family therapy, and cognitive-behaviorism. Sigmund Freud completely changed how the Western world thinks of the mind and human behavior, by using and developing techniques such as dream interpretation and free association. Freud has been universally acclaimed as well as he was deeply disliked by many who knew him for his personal views and his curt and deceptive personality. But for better or worse we live with a profound influence of Freud’s style of psychoanalysis. 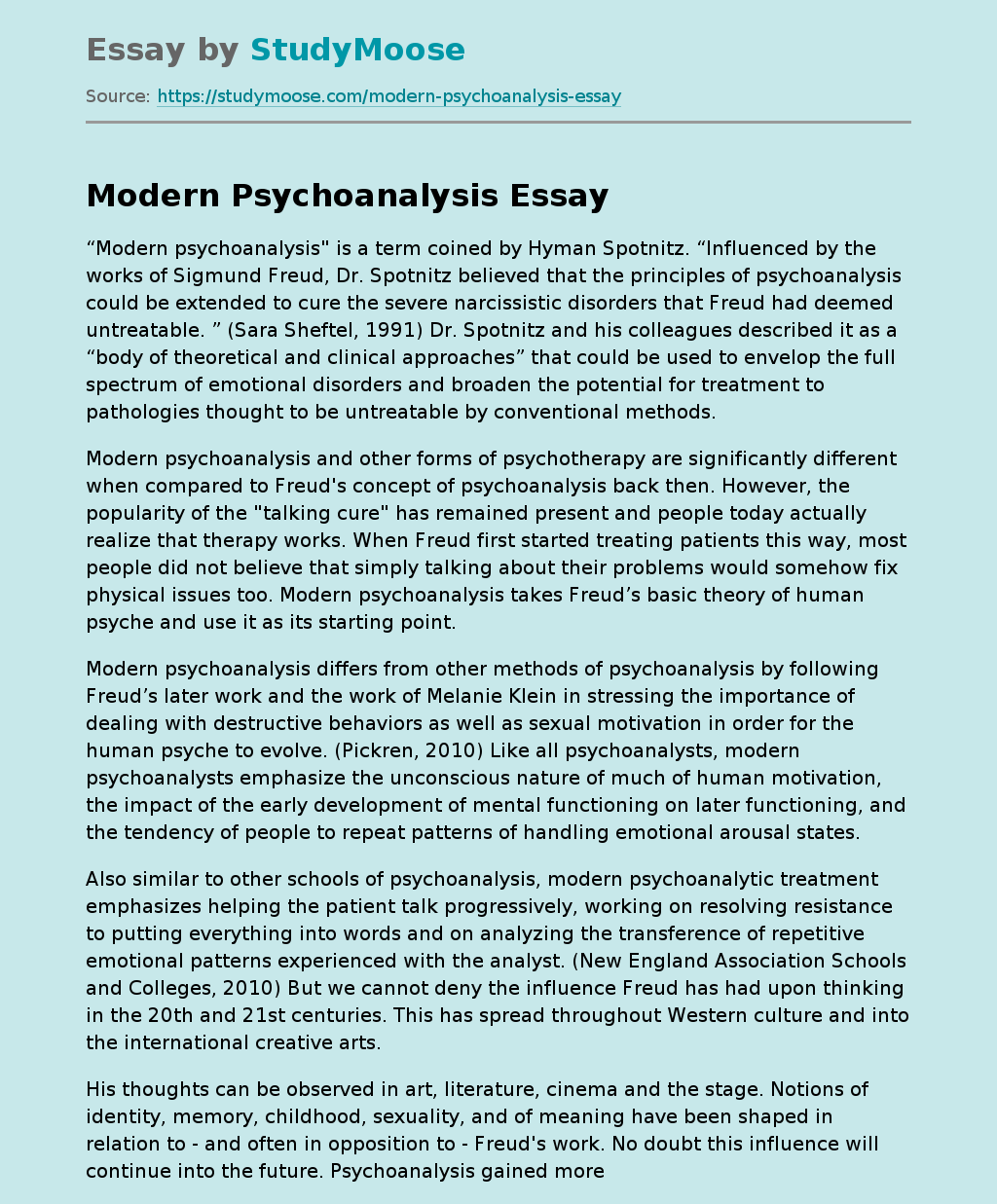