Modelling and Forecasting Electricity Consumption of the Philippines

In the Philippines, electric power is becoming the main energy form relied upon in all economic sectors of the country. As time goes by, while different establishments and properties were built and developed, the demand for domestic electricity consumption within the country accelerates. Energy consumption is an important index of the economic development of a country. Rapid changes in industry and the economy strongly affect energy consumption. According to the International Energy Annual (IEA) in the year 2004, the Philippines had total installed electricity generating capacity of 15.

Don’t waste time
Get a verified expert to help you with Modelling and Forecasting Electricity Consumption of the Philippines
Hire verified expert
$35.80 for a 2-page paper

1 gigawatts (GW). The country produced 53.1 billion kilowatt-hours (Bkwh) of electricity in 2004, while consuming 49.4 Bkwh. Conventional thermal sources make up the largest share of Philippine electricity supply, comprising more than 65 percent of the total in 2004.

However, the Philippines is also the world’s second-largest producer of geothermal energy. Despite several electricity sources, there are still bunch of problems that occur such as electricity shortage and high price somewhat due to increase of demand and company expenses.

The Philippines is not just the sole country that experiences these specific dilemmas but the other countries in Asia like Lebanon and Saudi Arabia, and the entire world too. This pushes researchers and experts to study the consumption movement from the past years in order for them to learn its behavior and suggest a method to help prepare the power companies and to prevent uncertainties that might happen in the near future. Through the years, there are many ways and methods developed by the experts and one of them is modeling and forecasting.

Modelling electric energy consumption is useful in planning and distribution by power utilities. Modeling is a process of generating abstract, conceptual,graphical and/or mathematical models. Models are typically used when it is either impossible or impractical to create experimental conditions in which scientists can directly measure outcomes. In the field of energy use direct to electricity, modelling is a very important factor in forecasting the next set of electricity consumption.

There are plenty of techniques and mathematical methods which are already used and proven effective in determining the energy consumption such as Multivariate regression –analysis, neural networks, autoregressive, and many more. Nowadays, time-series analysis was also used in the electric energy consumption modeling and forecasting. In statistics, signal processing, and mathematical finance, a time series is a sequence of data points, measured typically at successive time instants spaced at uniform time intervals. Based on Investopedia (2012) it provides another modeling approach which requires only data on the modeled variable, thus saving the user the trouble of determining influential variables and suggesting a form for the relation between them.

For instance, measuring the value of retail sales each month of the year would comprise a time series. This is because sales revenue is well defined, and consistently measured at equally spaced intervals. Data collected irregularly or only once are not time series. Also, according to Austrilian Bureau of Statistics (2005) an observed time series can be decomposed into three components: the trend (long term direction), the seasonal (systematic, calendar related movements) and the irregular (unsystematic, short term fluctuations). Models for time series data can have many forms and represent different stochastic processes. Some other applications of time-series analysis are in macroeconomics and finance. As of now, modelling and forecasting is of its highest peak of achievement and significance of the modern society especially in aiding certain dilemmas in electric consumption.

The goal of this study is to be able to forecast the electrical energy consumption of the Philippines for the next three years through formulating a model acquired from the data by using time-series. This information can contribute much to the power supply companies of the Philippines in order for them to determine the set of electricity consumption for the coming years. The forecasted result will help them plan and prepare for whatever might happen in the future years specifically in addressing the electricity shortage.

The study focuses primarily in modelling the electricity use of the Philippines by using the time-series analysis. The study is narrowed to the forecasting of the monthly electricity consumption for the next three years of the entire Philippines. The data used in modelling is based on the 1999-2011 record.

The proposed method however, is purely based on the assumption that the future trend of daily consumption follows the base year. Although this is a slight drawback, nevertheless the proposed method has provided the utility with a better means to forecast steel mills’ load, despite the unavailability of daily production data which is vital in forecasting. The outcome of this study will benefit the utility in ensuring reliable and economic operation of the national grid, and is also useful for analysis pertaining to development of future optimal generation and transmission expansion plans. Findings of this study also give a valuable contribution to the utility in determining load management strategies and designing of tariff structures.

A possible approach to improve the forecast performance is by combining the model with a time series method such as ARIMA. This will enable the model to take into account the most recent behaviour of steel mills load, and thus increase the accuracy of the forecast. The best approach however, would still be the one that is able to take into account the daily production data of the steel mills. With the availability of this particular data, many other complex and more effective methods can be explored such as Artificial Neural Network (ANN) and fuzzy linear regression. These methods will have the ability to capture the factors that highly influence steel mills daily load such as daily production plan and maintenance schedule, and hence improve the accuracy of the forecast. (S. Aman et.al, 2011 )

Long term energy consumption forecasting using genetic programming Managing electrical energy supply is a complex task. The most important part of electric utility resource planning is forecasting of the future load demand in the regional or national service area. This is usually achieved by constructing models on relative information, such as climate and previous load demand data. In this paper, a genetic programming approach is proposed to forecast long term electrical power consumption in the area covered by a utility situated in the southeast of Turkey. The empirical results demonstrate successful load forecast with a low error rate.

In this paper, a genetic programming approach on the forecasting of long term electrical power consumption of a moderate city in Turkey was presented. It uses the genetic programming method to forecast future usage through symbolic regression using annual data of the previous years.

In conventional regression, one has to decide on the approximation function (can be an n-degree polynomial, non-polynomial, or a combination of both) and try to find the coefficients of this selected function. Constructing an approximation function can be a difficult task. There is another form of regression called “symbolic regression”. In the symbolic regression problem, the aim is to search a symbolic representation of a model, instead of only searching for coefficients of a predefined model. Genetic programming (GP) method introduced by Koza can be used for the symbolic regression problem. GP searches for the model and coefficients of the model at the same time. In this study, power consumption data is processed with both conventional analysis and genetic programming techniques.

Long term power consumption forecasting can provide important information for power distribution centers. Power consumption in this city is rapidly growing; therefore accurate forecasts can help authorities to make reliable plans. In this work, a genetic programming based forecasting method is presented. Two other curve fitting methods are also presented for comparison with this technique. Data used in all three models are not preprocessed. Genetic programming technique is used to form a model and evaluate the parameters for the model. The goodness of the fit produced by the genetic programming method is evaluated using sum of squared errors (SSE) method, which is better than the other two methods of regression. It was proved that the genetic programming can be used for electric utility resource planning and forecasting of the future load demand in the regional or national service area effectively. (K. Karabulot et. al, 2008)

A comparison with national forecasts, based on complex econometric models, such as Markal-Time, was performed, showing that the developed regressions are congruent with the official projections, with deviations of 1% for the best case and 11% for the worst. These deviations are to be considered acceptable in relation to the time span taken into account. This paper aims to estimate GDP, price and GDP per capita elasticities of domestic and non-domestic electricity consumption in Italy. Also this paper wants to forecast the future growth of these consumptions using different regression models and compare our results with other available projections. The elasticity analysis showed that the price elasticity of domestic and non-domestic consumption is quite limited, confirming some results presented in previous studies. Through the findings, conclusions have been acquired.

First, there is no need to consider electricity price as explaining variable in forecasting models for Italian electricity consumption. Second, pricing policies cannot be used to promote the efficient use of electricity in Italy. The estimation of GDP and GDP per capita elasticities showed higher values with respect to price elasticities, demonstrating that the consumption response to GDP and GDP per capita changes is relevant. Therefore, there is the need to assure an appropriate level of electricity supply to sustain the economic growth in Italy. According to the second target of the paper, different long-term forecasting models were developed and they substantially lead to similar results.

The models performed effectively in the statistical tests conducted, implying their signiﬁcance in forecasting electricity consumption using the explaining variables considered. Comparisons of these models have been made with the national forecasts available in New Zealand. The comparison revealed that the forecasts made by the regression models are very comparable with the national forecasts. The accuracy of the forecasts made by these models depends strongly on the accuracy of forecasts made for the explaining variables. In this paper, simple regression had been used to model these variables. (Z. Mohamed & Pat Bodger, 2003)

Modeling and Forecasting Electricity Demand in the Philippines The Philippine government has deregulated electricity generation markets to encourage private investors and actively courted independent power producers (IPPs). This has been done to promote efficiency and reduce government financial debt obligations. Until the mid-1980s, the power sector in the Philippines was mostly state-owned through the National Power Corporation (NPC). After the debt crisis in the early 1980s, the Philippines’ government tightened fiscal policy, and capital expenditure for additional electricity capacity was significantly reduced. This led to a slowdown in the electricity generating facilities. At the same time, electricity demand continued to increase. This resulted in tight electricity supply and demand conditions by the middle of the 1980s. There continue to be periods of generating capacity constraints.

Modelling and Forecasting Electricity Consumption of the Philippines. (2017, Feb 01). Retrieved from http://studymoose.com/modelling-and-forecasting-electricity-consumption-of-the-philippines-essay 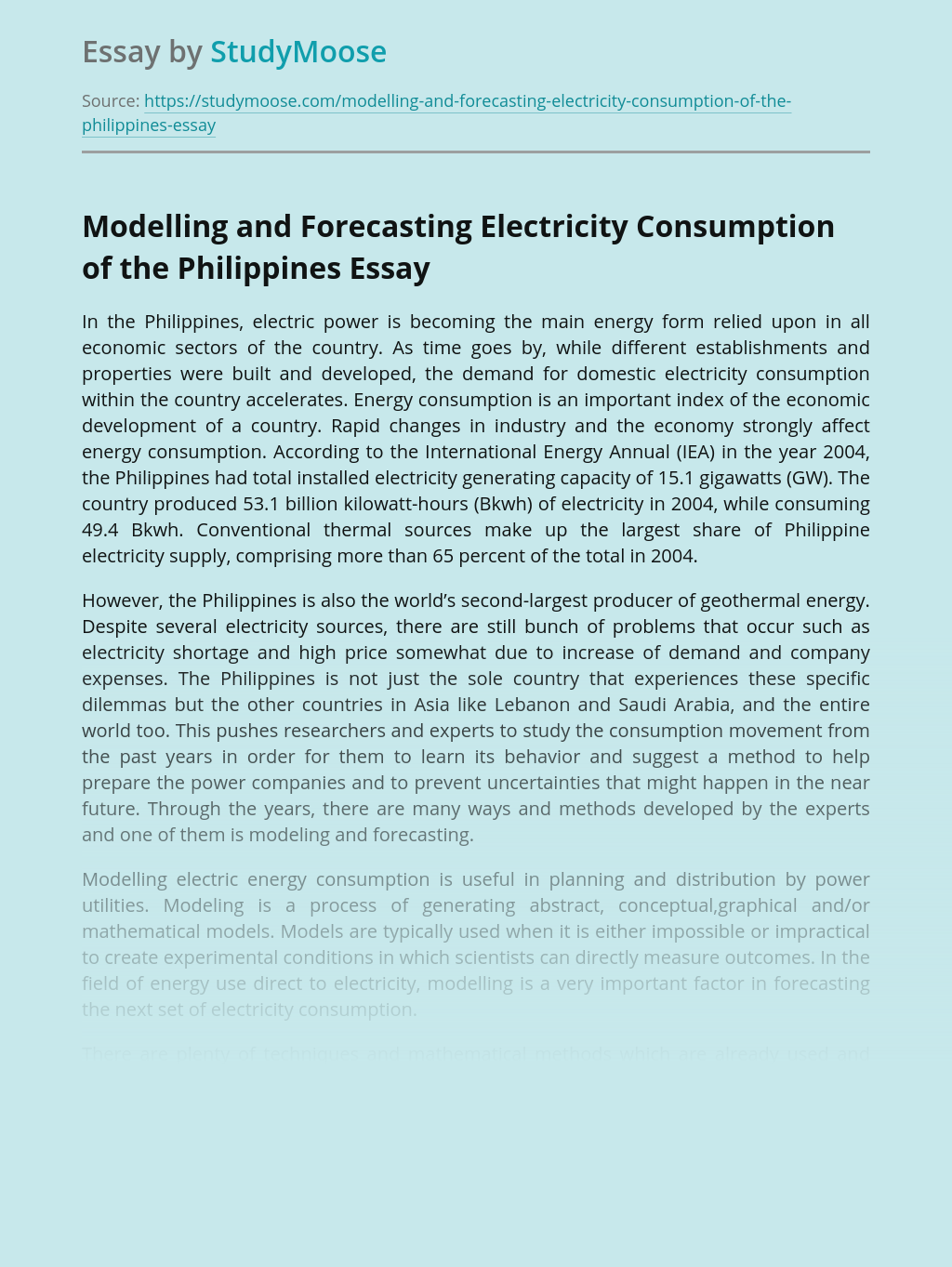 Don’t waste time
Get a verified expert to help you with Modelling and Forecasting Electricity Consumption of the Philippines
Hire verified expert
$35.80 for a 2-page paper
Stay Safe, Stay Original