Mob mentality is a term used to describe a unique behavioral characteristic that develops when people are in a large group. It is often viewed as a negative sense but it can also be a positive sense. When people in our society today hear the word “mob” they think of an aggressive chaotic group of people fight or doing something with little to no reason. The mobs we have today has the same effect of what people think but it has become thoroughly worse.

Don't use plagiarized sources.
Get Your Custom Essay on Mobs, Mobs, Mobs Just from $13,9/Page

The factors of mob mentality leaves our society dumbfounded when it acts with alienation and animosity controlling us like a plague.

The aspects of mob mentality comes in numbers which leaves us drowning not knowing what and how to react. Two main aspects that play a role in mobs are the overpowering anonymity that exists within a mob and the allotment of responsibility of the group’s behavior. These factors sometimes conceive a person’s belief that they can act a certain way within the group and not have the same consequence as what he or she would of faced if they did it on their own.

For instance, if a person is in a mob that is causing havoc in a building, that person might believe that there would be less of a chance that they would get caught if they were alone, because it would be difficult for authorities to identify every person who was involved. They would also feel less guilt because of the many who did the same.

Another factor in mob mentality is the greater sense of confusion or panic that would abrupt in a large riot. A perfect example is shown in most disastrous movies like 2012 or I Am Legend when large groups of people suddenly begin running in one direction. Although many people might not know why this would be happening, they see them and abruptly without warning begin running in that direction too. In severe events, the urge to run and panic spreads through everyone’s mind like a pandemic creating some sort of crowd delirium. Even for something that isn’t as chaotic like Black Friday when people see that a 60″ HD LCD Samsung TV for sale at the price of $400, once they’re released its monkey see monkey do, some guy runs and the rest follows. Everyone has that moment when one of these events happened, threes also the voice in your head leaching adrenaline through your body telling you run run run! Mob mentality plays a role in plays and concerts that were the “best.” Three people would stand up applauding and screaming like mad men. Then maybe a few others would join them. Some would look around uncomfortably , scanning the crowd, deciding if it was alright to start clapping. Our brains are wired to follow the crowd which afflicts damage to our society greatly and creating indecisive entities in everyone’s heads.

There is a little more insight to show why people will react in ways that rebel against their regular morals and beliefs. “When people are part of a group they can deindividuate, (lose their self awareness and sense of individuality), and get caught up in the emotional excitement and indulge in behaviors they would not engage in alone” (Page 1). They may not feel that they are the ones responsible for their act of violence as they continue to do so as “the group’s”. The larger the mob, the more our society can lose self awareness as a whole or one’s self. 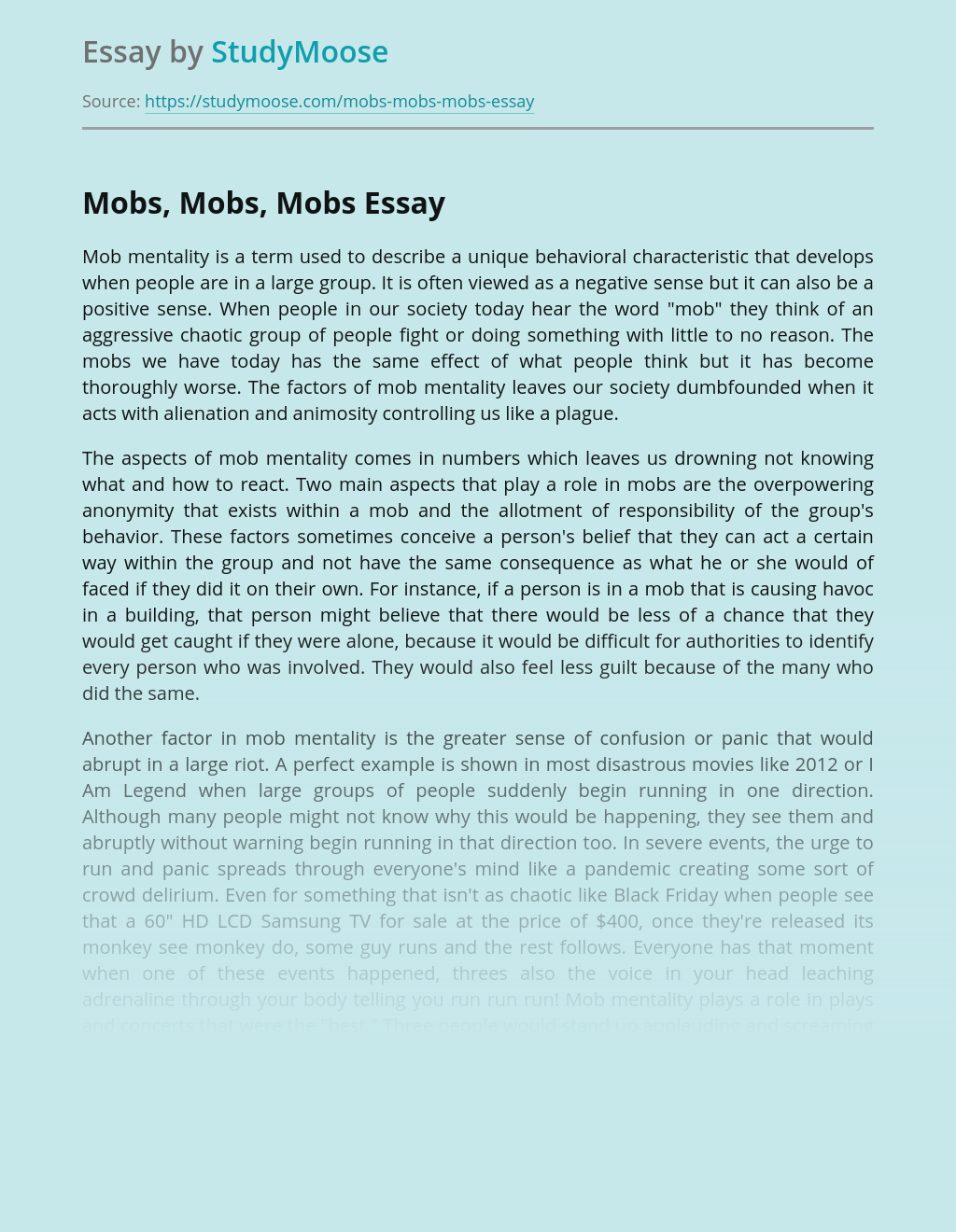 From an existentialism point of view, there is no right or wrong choice, since one gives an action value by the virtue of choosing it. Choices can only be judged on how involved the decision maker is when making it. Judging by this standard, the narrator is justified in killing Tyler, since he fully became...

Absorbent Mind Mind- “The human consciousness that originate in the brain & is manifested especially in thought, perception, emotion, will, memory & imagination. The collective conscious and unconscious process in a sentiment organism that directs & influence mental & physical behaviour.” Guideline by Navadisha Child’s aim:- Reproduction of adult or Self Construction In child development...

Get Essay
Outline Informative Speech on Deja Vu and Memories

CENTRAL IDEA: to inform my audience about the theory of Deja Vu. Including what, how and the effect about Deja Vu . INTODUCTION Attention Getter: I can’t remember any things well while I thought something happened to me, I feel like I ever seen something but I don’t know when it was or where it...

Transformative learning is the process of “using a prior interpretation to construe a new or revised interpretation of the meaning of one’s experience in order to guide future action” (Mezirow, 2003). It is also a process where “an education that is transformative redirects and reenergizes those who pause to reflect on what their lives have...

Carl Jung: The Undiscovered Self

The book of C.G Jung “The Undiscovered Self” was written during the cold war concerning communism. He saw during this time the trend toward collectivism as the utmost threat to the individual self. He expresses grief over the adoption of mass mindedness, and encourages its psychic depreciation. Witnessing the physical and psychological destruction of war,...