Mobilink (Pakistan Mobile Communications Limited) and Warid Telecom, Pakistan agreed to merge into a single company in year 2015 of the Mobile Telecommunication Sector of Pakistan in three phases. Later on, this first time merger in mobile communication sector of Pakistan was announced under brand called “Jazz” in year 2017. After successful transaction of merger, Mobilink’s CEO Jeffrey Hedberg will be the new CEO of the combined business and Mobilink’s CFO Andrew Kemp will become the CFO of the combined function.

Don't use plagiarized sources. Get your custom essay on
“ Mobilink and Warid Telecom ”
Get custom paper
NEW! smart matching with writer

Effect on Customers and Public

A great deal of value will be created for all stake holders by Mobilink and Warid which will provide cost-efficient telecommunication services for over 45 Million customers all across Pakistan since Warid has very strong post paid services base complemented with high quality 4G/LTE network.

Warid customers will have to replace their SIM free of cost from Jazz services centers. The public will have low cost access to diverse and value added telecommunications services and one helpline after the merger. Customers will be allowed to retain their present numbers after the merger. Effect on Shareholders Shareholders of Mobilink has completed 100 percent acquisition of shares of Warid and shareholders of Abu Dhabi Group have acquired 15 percent shares of Mobilink.

Shaheed Zulfikar Ali Bhutto Institute of Science and Technology (SZABIST), Islamabad Effect on Employees Jeffrey Hedberg, President & CEO of Mobilink emailed his employees stating that all of you will be the part of the most preferred mobile operator for the people of Pakistan after this merger. Management also conveyed that employees and retailers will be retained on the basis of need, skill set and performance. Moreover, eight heads of departments of Warid are assigned to work as employees of Mobilink for 90 days with their counter parts from Mobilink in order to decide their future in the company. Also, new management of Mobilink — Warid has closed more than 200 franchises during the consolidation process rendering 60-70 people per franchise as jobless which also resulted in public demonstrations against Mobilink in various cities across Pakistan.

Effect on Competition Mobilink will provide 4G services despite Warid was already providing 2G and 3G services to its customers at the most economical rates in Pakistan. Mobilink has market share of 29 percent and 35 million customers before merger which will be over 45 million customers after merger. There will be combined 13000 mobile communications towers (8000 of Mobilink and 5000 of Warid) after merger, some of which will be decommissioned. Both companies will render more towards R&D which will provide protection from competitors (Ufone, Zong and Telenor) as sharing of resources will be one of the hallmarks of this merger. Value creation by Mobilink after this merger will be easy and it can gain more customers. Therefore, Mobilink can become market leader of mobile communications in Pakistan besides following the cost leader strategy.

Mobilink and Warid Telecom. (2020, May 14). Retrieved from http://studymoose.com/mobilink-and-warid-telecom-essay 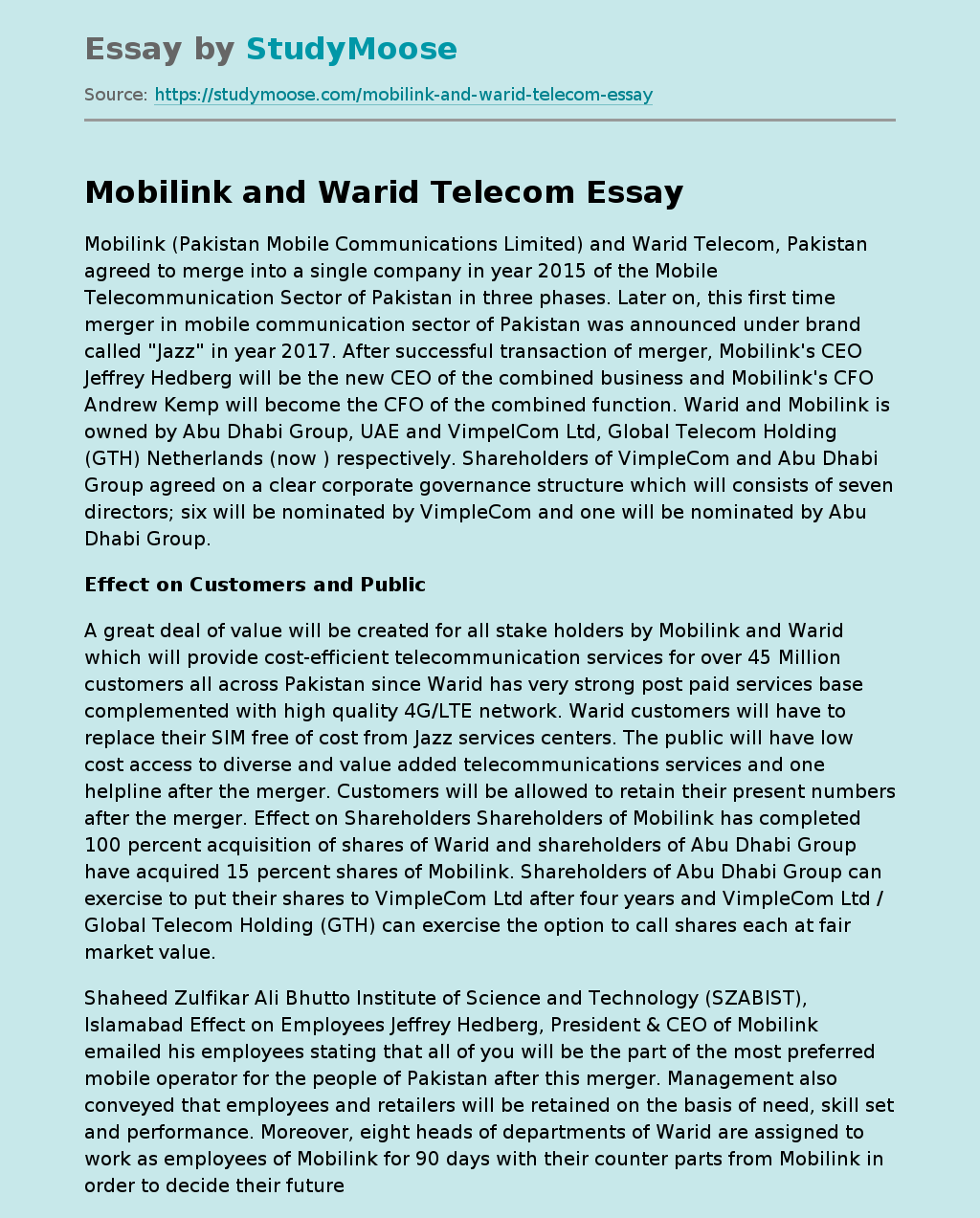