Miss Ever’s Boys is a docudrama film that was produced by the HBO cable network. The movie explores ethical and social issues involved in the infamous Tuskegee Study. The study was about untreated black men with syphilis. The U.S. Public Health Service is said to have conducted a study among 600 black Americans from the years 1932 to 1972. This study was done in Macon County. This paper will exclusively explore the critique the Miss Ever’s Boys film using ethical frameworks.

To start with, this study was to study a sexually transmitted disease called syphilis but not to provide its cure. Before involving anyone in this study, the U.

However since they knew the consequences of the study, the U.S. Public Health Service was afraid that the people will not participate since the study was not offering any cure at all. This is against the bioethics of medical practice that requires the beneficence concept to be respected in any clinical research. So basically, it will be right to say that beneficence ethical principle was not met in this film (Stripling, 2005). The concept of justice in research ethics requires that researchers need to make a fair selection of participants.

Therefore, there should be an ideal distribution of benefits and risks and benefits while conducting a clinical research. In the movie, “Miss Ever’s Boys”, only blacks were included in the study. The study recruited 600 black men and none white person. To start with, this was discrimination of the highest order. This means that only the black men were at the risk of dying, considering that they treated them with placebos. This means that only the black men’s lives were endangered while the bioethics requires that the risk to be distributed equally (B. Miss Evers Boys and the Tuskegee Syphilis Study, 2013). Respect for persons means that people have a right to fully exercise their autonomy.

Therefore, the respect for person ethical principle was not meet in the movie “Miss Ever’s Boys”. Duty-based ethics are based on duty or obligation. Kant argues that there are higher principles that are good in no matter the time, situation, or culture. Therefore, when faced with an ethical dilemma, it’s important to know that we have a duty to meet. In this movie, the U.S. Public Health Service was faced with a situation which was the rising prevalence of people suffering from syphilis. However, the U.S. Public Health Service had an obligation to meet which was to find the cure of the disease without necessarily having to put people through so much pain for 40 years.

One thing that was very sad was the fact that even after discovering that penicillin could cure syphilis; the U.S. Public Health Service did not give the sick black men. This led to the death of 160 people (B. Miss Evers Boys and the Tuskegee Syphilis Study, 2013). Virtue-based ethics helps us in deciding the necessary actions to take depending on the kind of person we want to be. Here, the recognition of human dignity is very important. All humans have a right which is either positive or negative. 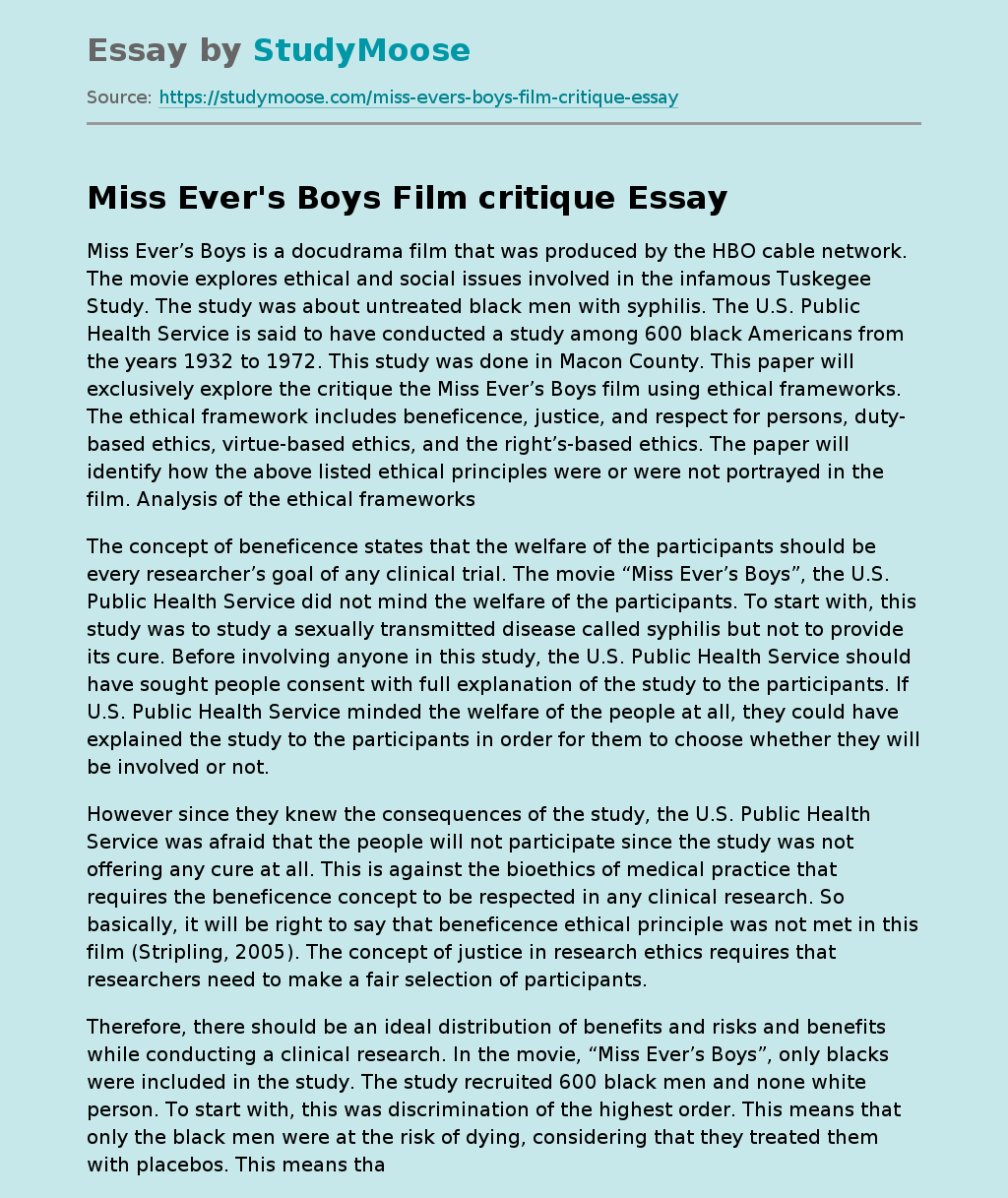