Minor characters in "To Kill a Mockingbird"

Mayella Ewell is the first minor character I shall discuss; a beacon of racial prejudice and the injustice of the courthouses.

Don't use plagiarized sources. Get your custom essay on
“ Minor characters in “To Kill a Mockingbird” ”
Get custom paper
NEW! smart matching with writer

She is considered to be trash along with the rest of the Ewell’s; despite the fact that she is one of the few Ewell’s who can read and write. As well as being literate she tries her best to make that most of what she’s got, “the quote about the flowers she keeps”. Despite her decency compared to the others in her family Mayella still only cares for her own wellbeing.

When she forces herself upon Tom Robinson, in a last ditch attempt to feel some affection from a man, she is soon to realise the error of her ways. As Atticus says,

“She has committed no crime, she has merely broken a rigid and time honoured code of our society” by going after a black man she has broken ‘the rules’ of Maycomb and thus she tries to hide the truth by abusing Maycomb’s harsh structure of injustice and racism.

She is white and Tom is black meaning the court case, as she well knows, can only have one outcome. She would rather sentence a man to death for something she had done to him, “She reached up and kissed me ‘side of th’ face. She said she never kissed a grown man before an’s she might as well kiss a nigger.” than tell the court and the towns folk that she had come onto a black man.

Harper Lee uses Mayella and her made up story to show the racism of the justice system, she shows that simply by lying and having someone to lie with you when the case is white words against black the white will win. Despite Mayella’s story falling apart under cross-examination Tom’s version of what happened isn’t taken note of, as he is black.

Also in this case, we have the testimonial of the local sheriff Heck Tate; he too is a tool of great injustice for the blacks. In his testimony we read that he was called by Bob Ewell and told that “some nigger’d raped his girl” upon arrival he found Mayella and asked who had done it – Tom Robinson. A black man accused by a white woman, Heck went and rounded him up instantly to be identified by Mayella. No questioning, no looking for evidence or any kind of service a white man could expect, Heck presumes that he is black and therefore must have committed some kind of crime.

However, despite Heck’s injustice towards the black population of Maycomb he does fulfil his duties to the white. After Boo stabs Bob to save Atticus’ children Heck decides that for the greater good nothing should be said and the incident should be considered an accidental suicide. Heck shields the town from the truth and allows Boo to go back to his normal life – after all he had done the town a favour.

Another man who shields the town from the truth, but about a very different subject is Dolphus Raymond, a presumed evil alcoholic who spends most of his time with the black townsfolk. “Come round here, son, I got something that’ll settle your stomach.” Is the invitation given by Dolphus to Dill outside the courthouse. He offers Dill his brown paper bag with straws in and tells the boy to take a good sip. Scout says ” Dill, you watch out, now” as she, like the rest of the town believes that Dolphus is always sipping from a bottle of gin within his bag. He pretends to be drinking all day as “it’s mighty helpful to folks.”

He is forced to pretend to be drinking all day and to be messed up in the head to help the prejudice people of Maycomb understand why he would want to spend most of his time with the black people. Only the uncorrupted children are trusted with Mr. Raymond’s deepest secret as he feels that because they are children they can understand why he pretends to drink and why he has to give the people a reason as to why he spends his time with black people. This helps give an idea of the intolerance in the town. Intolerance towards black people and towards anyone who has contact with black people as a friend, rather than just a slave.

Harper Lee uses minor characters traits and beliefs to show the reader some of the issues at hand in the book. Whether it be a girl pretending to have been raped to highlight the levels of injustice and the racial prejudice in the book, or whether its Heck Tait acting under the powerful words of a white person to do wrong to blacks, or his truth shielding to help a white man stay out of prison for a crime he really did commit.

Minor characters in "To Kill a Mockingbird". (2016, Jul 22). Retrieved from https://studymoose.com/minor-characters-in-to-kill-a-mockingbird-essay?post 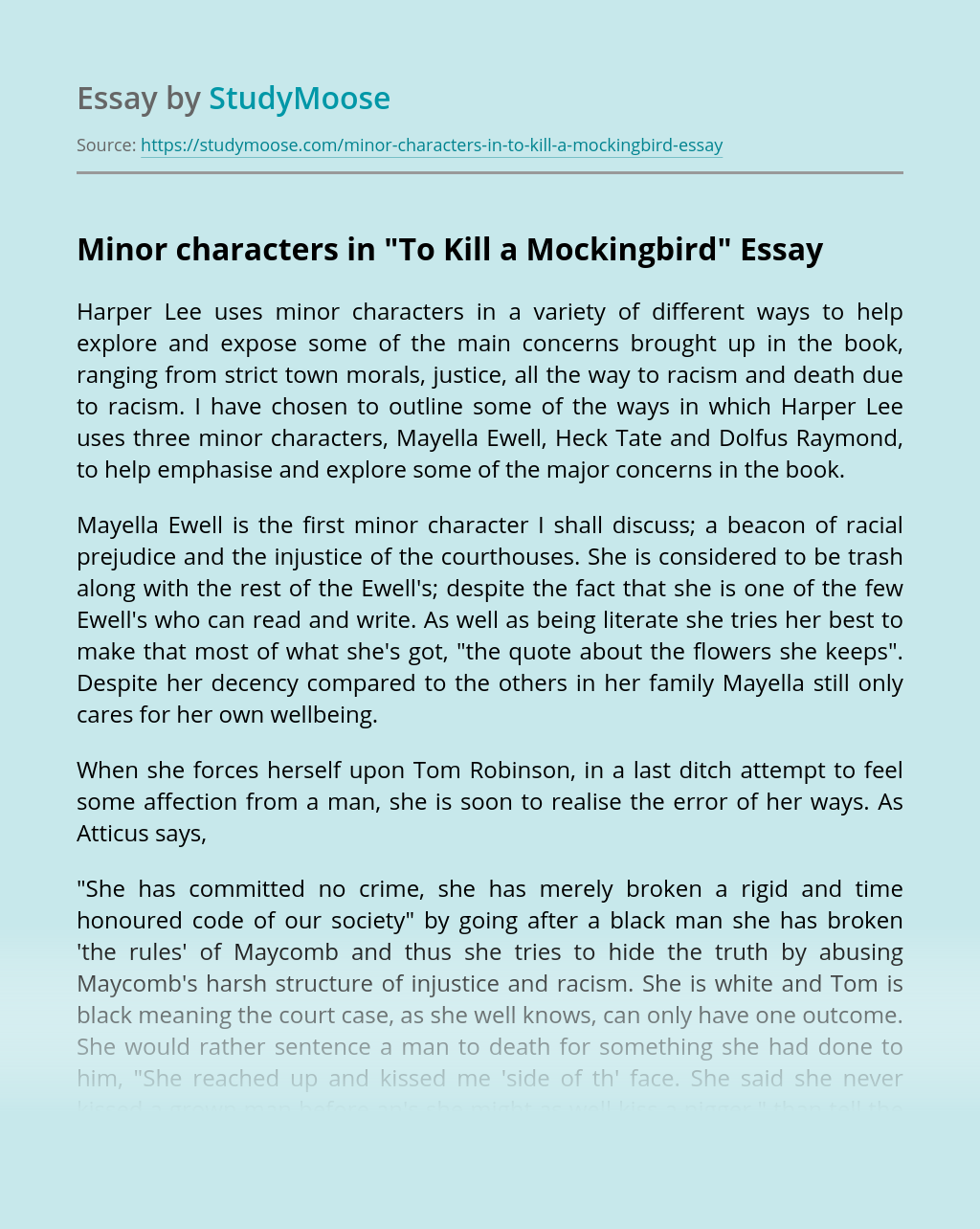