Although this is an era when violence is frowned upon and war deplored, still the soldier has remained an esteemed figure. Even more appealing to the imagination are tales of tyrants and the courage of the underground guerillas that oppose them. Such almost mythic status has been conferred upon three sisters, nicknamed the Butterflies, who participated in the fight against the thirty-year dictatorship of Rafael Leonidas Trujillo in the Dominican Republic. While heroic deeds take the spotlight, one may forget that even freedom fighters begin as children.

Don't use plagiarized sources. Get your custom essay on
“ Minerva’s Character: An Ordinary Bravery ”
Get custom paper
NEW! smart matching with writer

That they learn as children and grow as humans, fallibly and inconstantly, is a fact remembered by Dominican novelist Julia Alvarez. In Alvarez’s novel In the Time of the Butterflies, she uses several turning points in the life of Minerva Mirabal to define that character’s growth as a human being rather than a hero.

Alvarez uses two turning points in Minerva’s childhood to show her potential for the life ahead of her, yet emphasize her childish innocence.

In the beginning of the novel, Alvarez introduces Minerva to the reader with Minerva’s excitement that her Pap plans to send her away to school. School becomes Minerva’s first victory and step towards her life as a revolutionary fighter. This, Minerva says, “[i]s how I got free” (13). Alvarez uses Minerva’s departure for school and her excitement for it to signify Minerva’s early emotional divorce from the need for her parents’ approval and dependence on their value system, while demonstrating with this scene how independent and strong-minded Minerva is, as compared especially to her sisters.

At school, Minerva experiences a prelude to what may be the biggest turning point in her life. For all her independence, she still believes in the propaganda that Trujillo and his administration have spread. Her good friend Sinita tells Minerva a story of Trujillo’s evil as they whisper under blankets late at night like the schoolgirls they are. Minerva says to Sinita, ” ‘Bad things?…Trujillo was doing bad things?’ It was as if I had just heard Jesus had slapped a baby” (17). Although Minerva does not fully accept the image of Trujillo as a tyrant, when she wakes up the next morning she finds that she has received her first period; Alvarez has made her a woman. When Trujillo seduces a classmate named Lina, she comes to realize his corruption, if not with the maturity of an adult, saying, “I felt sorry for him. Pobrecito! At night, he probably had nightmare after nightmare like I did, just thinking about what he’d done (24). Alvarez illustrates Minerva’s childlike faith in a world where guilt accompanies sin, and to such an extent as to draw pity. Here Alvarez places her in a position from which she may step into her new role as a rebel, while also demonstrating that she is currently too young for such responsibility.

As Minerva grows older, Alvarez uses Minerva’s impulsiveness to allow her to realize her own strength. Minerva confronts Pap after finding that he has fathered illegitimate children, and “saw his shoulders droop…right then and there, it hit me harder than his slap: I was much stronger than Pap…He was the weakest one of all” (89). Alvarez led Minerva to discover her power by her own actions in order to justify her portrayal of the character as drawing strength from herself while also giving it to those around her. Minerva’s energy and conviction in herself and in her cause carries her into a role in the underground and then into and through La 40, a prison. Alvarez shows Minerva’s strength there through the admiring, if sullen, eyes of her younger sister and comrade, Mara Teresa, who, after crying, says, “Lord forbid Minerva should see me, or she’d give me another one of her talks about morale” (233). Minerva has assumed a motherly role in the uprising. However, after Trujillo grants Minerva and her sister release and puts them under house arrest, Minerva’s spirit takes a turn for the worse. She says, “[I was] shocked at what I was letting happen to me. I had been so much stronger and braver in prison. Now at home I was falling apart” (258). Her bravery becomes little more than a performance, and Alvarez emphasizes the change with the many acquaintances who lean close to Minerva to whisper, “Vivan las Mariposas!” Although many still look to Minerva for leadership and strength, she is not always able to provide it for herself.

Alvarez, while she does not flinch from showing Minerva’s faults, also does not deprive the girl of the more heroic standing she has built towards. She does not allow Minerva to wallow in her sorrow for much longer, and another turning point comes when she and her sisters fear than their husbands will be executed. Minerva reflects that “By now in my life I should have known. Adversity was like a key in the lock for me. As I began to work to get our men out of prison, it was the old Minerva I set free” (269). The challenge gives Minerva reason to rise again. Although, due to the fact that she is tightly guarded, Minerva never again reaches the level of political activity she had as a free woman, she and her sisters do begin to investigate the state of their old underground once more. That Minerva’s spirit is whole and healthy again is clearly demonstrated by Alvarez near the very closing of the book. Even as Minerva and her sisters travel towards what appears to be an ambush, Minerva feels an air of excitement. She ventures, “I don’t know quite how to say this, but it was as if we were girls again, walking through the dark part of the yard, a little afraid, a little excited by our fears, anticipation the lighted house just around the bend – That’s the way I felt as we started up the first mountain” (297). Although Alvarez reports that Minerva felt excited as she and her sisters “started up the first mountain,” in reality, most of Minerva’s mountains have already been crossed. She begins as a naive child, encounters injustice, fights it, becomes depressed, and then after all this rights herself. Alvarez conveys through this that Minerva’s resurrection, while not the most revered of her acts or the one that earned her the love of her country, may be her most heroic stage of life; a hero must not only overcome threats to her country but threats to her spirit.

Alvarez reveals the theme that a few people, while they may not cause an entire revolution, can provide inspiration and motivation for others. While the Butterfly sisters represent this motif of bravery for the Dominican Republic, Minerva likewise represents it for her family. Although each sister has her own inner strength, only Minerva has enough to both fortify herself and sustain others. She passes though many stages of life in the novel as her country’s political situation develops. Although it is ironic in the traditional sense of a hero’s unassailable person that both Minerva and her foe Trujillo are eventually brought down, and she much sooner than he, it is consistent with Alvarez’s depiction of Minerva as not a traditional hero, but a woman. 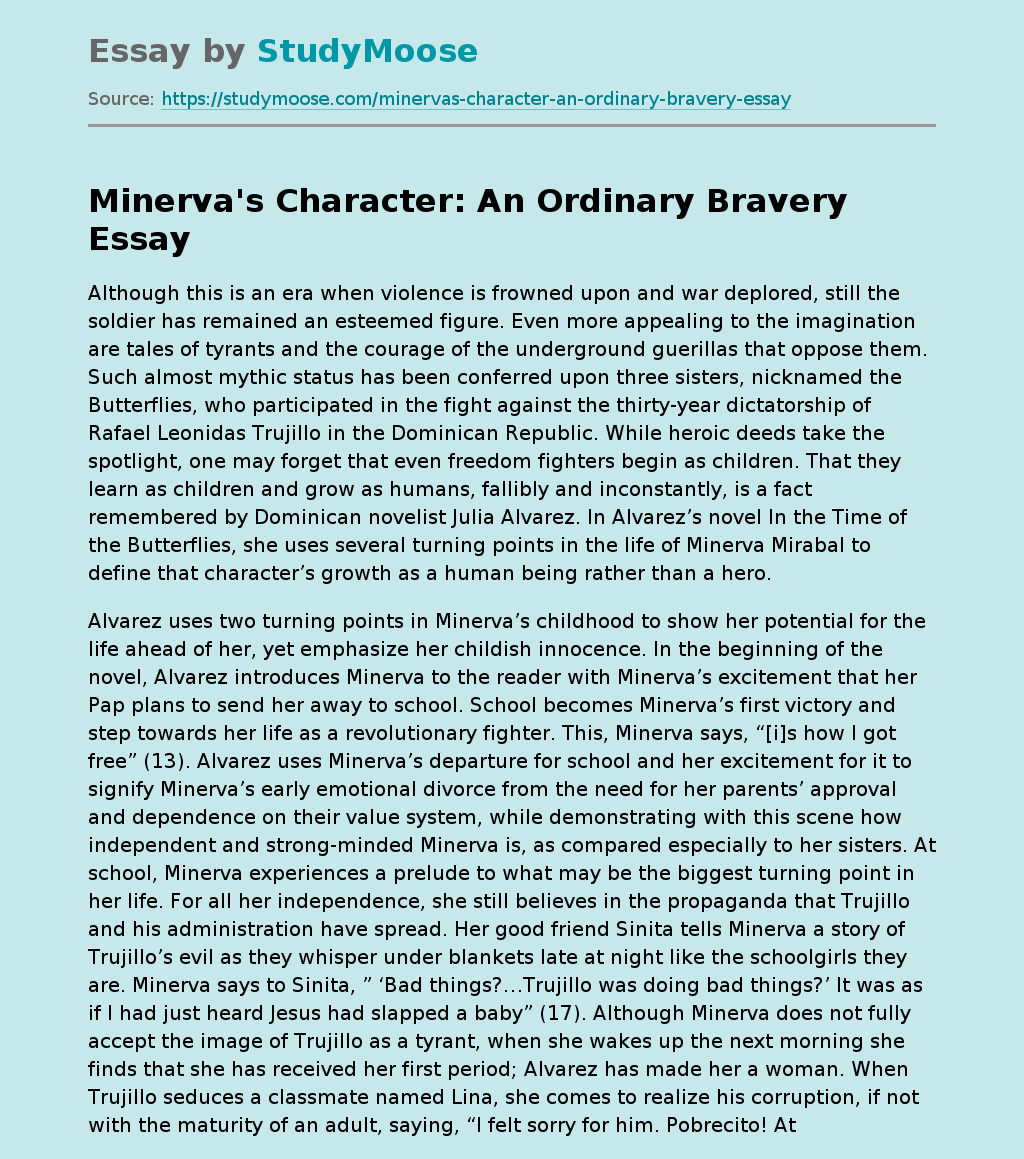