Don't use plagiarized sources.
Get Your Custom Essay on Mindless of Society Just from $13,9/Page

Beatty tells Montag. “If you don’t want a house built, hide the nails and wood. If you don’t want a man happy politically, don’t give him two sides of a question to worry him; give him one. Better yet, give him none. ” This quote is saying to not give humans an answer to think of. If a person has the answer to a question, someone else could possibly argue with their opinion and cause a commotion.

That is why in Fahrenheit 541, that society is a place not to think and react. Another way Ray Bradbury has shown the mindless mass culture is though the character Faber.

Faber is an old man and a friend to Montag, He compares how book are almost the same as society. How books need quality, able to understand and those are something that you need to find in people. Faber tell Montag, “Number one: Books have to have to have quality. Number two: One needs leisure to digest it. Number three: One needs the right to carry out actions based on what they have learned from the first and second lesson. ” Books are compared to how people are in the present and how books are not needed because the current technology which the society has will start replacing books. Eventually books will not be need is in life.

Another way the mindless of mass culture is shown in Fahrenheit 451 is when Clarisse had died. Clarisse is a 17 year old girl, who is different from everyone in the society in Fahrenheit 451. She was a person who liked to question things in society or anything that goes around her. She was a very intelligent person, but a tragic event happened. She died and no one knows if she had committed suicide or if someone had killed her. Milderd the wife of Montag tells him, “Whole family moved out somewhere, but she gone for good, I think she is dead. No, the same girl, McClellan McClellan. Run over by a car. Four days ago.

I’m not sure. But I think she dead. The family moved out anyways. I don’t know. But I think she’s dead. ” How this relates to the mindless of mass culture sense nobody cares if something important had been taken away, such as loved for one. The society just forgets about everything they used to have. It shows how the society foreshadows everything that they do. The theme mindless of mass culture was expressed by characters in the book; the theme had a very big impact on everyone in the society. This theme has affected each one mind and making every person in society to be like a robot which no emotions at all. 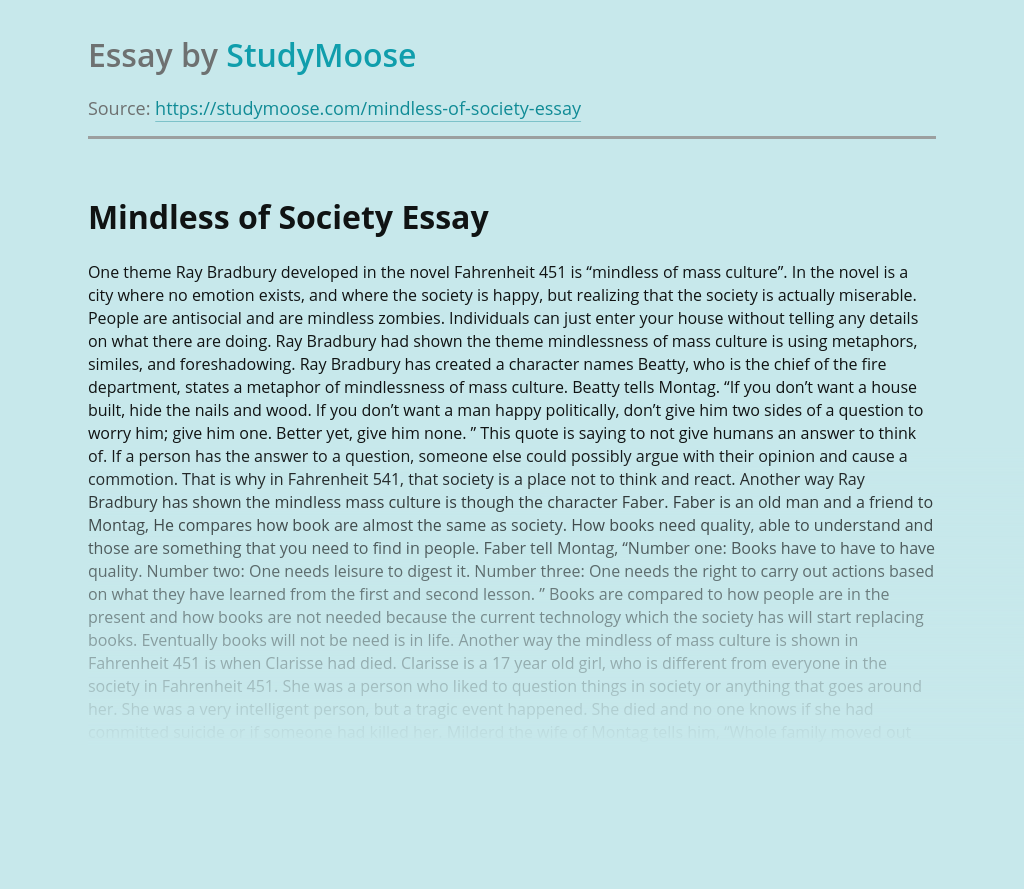 In the film Schindler’s List directed by Steven Spielberg an important idea was the character change of Oskar Schindler throughout the film. Schindler went from a self-centred, uncaring war profiteer to a caring, sympathetic man who was willing to risk his life to help save the lives or even simply better the conditions of hundreds...

Shakespeare’s disaster “King Lear” goes over many ideas the most important being the relationship in between excellent and wicked and the continuous battle of the revers; their reliance and the origin of wickedness, in addition to the reality that something great can never ever “ruin” anything all play a crucial function in the concern of...

Get Essay
"Pride and Prejudice": Lady Catherine and Elizabeth Bennet

In the field of psychology, as the father of psychoanalysis, Sigmund Freud affirmed and asserted that individual patients could benefit from an analysis of unconscious dynamics that included neurotic conflicts, dreams, wish fulfillment, and other mechanisms of the life of the self. Besides this, Freud also believed that psychoanalytic theory could be applied to elements...