Mindanao should not be an independent state

Mindanao should not become an Independent State
“One of the essential attributes of a state under International Law is external sovereignty, the right to exercise freely the full range of power a state possesses under international law. Recognition of a state as independent necessarily implies that the recognizing states have no legal authority over the independent state. The status of a fully independent state should be contrasted with that of dependent or vassal states, where a superior state has the legal authority to impose its will over the subject, or inferior, state.

Turn in your highest-quality paper
Get a qualified writer to help you with
“ Mindanao should not be an independent state ”
Get high-quality paper
NEW! AI matching with writer

” How can Mindanao practice the said definition of an independent state where in fact, there are many aspects which can fail us Mindanaoans in attaining such? We lack sustainability, there is a conflict in religion, and division hurts economically and culturally.

These are just some of the aspects I was talking about which fails the Mindanao in becoming an Independent state. Before independence is declared, Mindanao must show that we have the resources to be independent.

Yes, we can say that we some of the resources; in fact, people from Luzon, Visayas, and even from other countries come to Mindanao to buy our resources. But the question is who will sustain them? We lack sustainability; we lack businessmen to run these said resources. In another aspect, we can never be confident that Muslims and Christians populating Mindanao will be able to live in harmony and prosperity. We would need to go extra-mile in and work harder in order to go under one agenda.

But diversity does not necessarily result in unity. That was what I meant when I mentioned about a conflict in religion. Muslims can not accept that Christians eat lechon during fiestas or other special occasions, their culture and faith says it is strictly forbidden.

On the other hand hand, Christians, if for their faith as well, frown on Muslim husbands having four legal wives and call this practice adulterous. How can we really reconcile both parties? Third, division hurts both economically and culturally. Personally, it would be so absurd and ridiculous if us travelling now to Luzon or Visayas, which some of my relatives live, would require a passport or visa. Wouldn’t it be just a hassle? Now, with all these aspects, where will Mindanao get the source of people, peace, and comfort to run the people? If independence means unchaining Mindanao from the shackles of our national debt, that would be good, but it sounds fine only in theory. Mindanao has been receiving developmental aids yet we remain in the stage of desolation. For so long, the people of Mindanao cannot be united, in fact, no other territory in the Philippines is so fractious as Mindanao. Being an independent state will not justify conditions of governing itself. Over all, Mindanao cannot afford to become an independent state.

Mindanao should not be an independent state. (2016, Apr 13). Retrieved from https://studymoose.com/mindanao-should-not-be-an-independent-state-essay 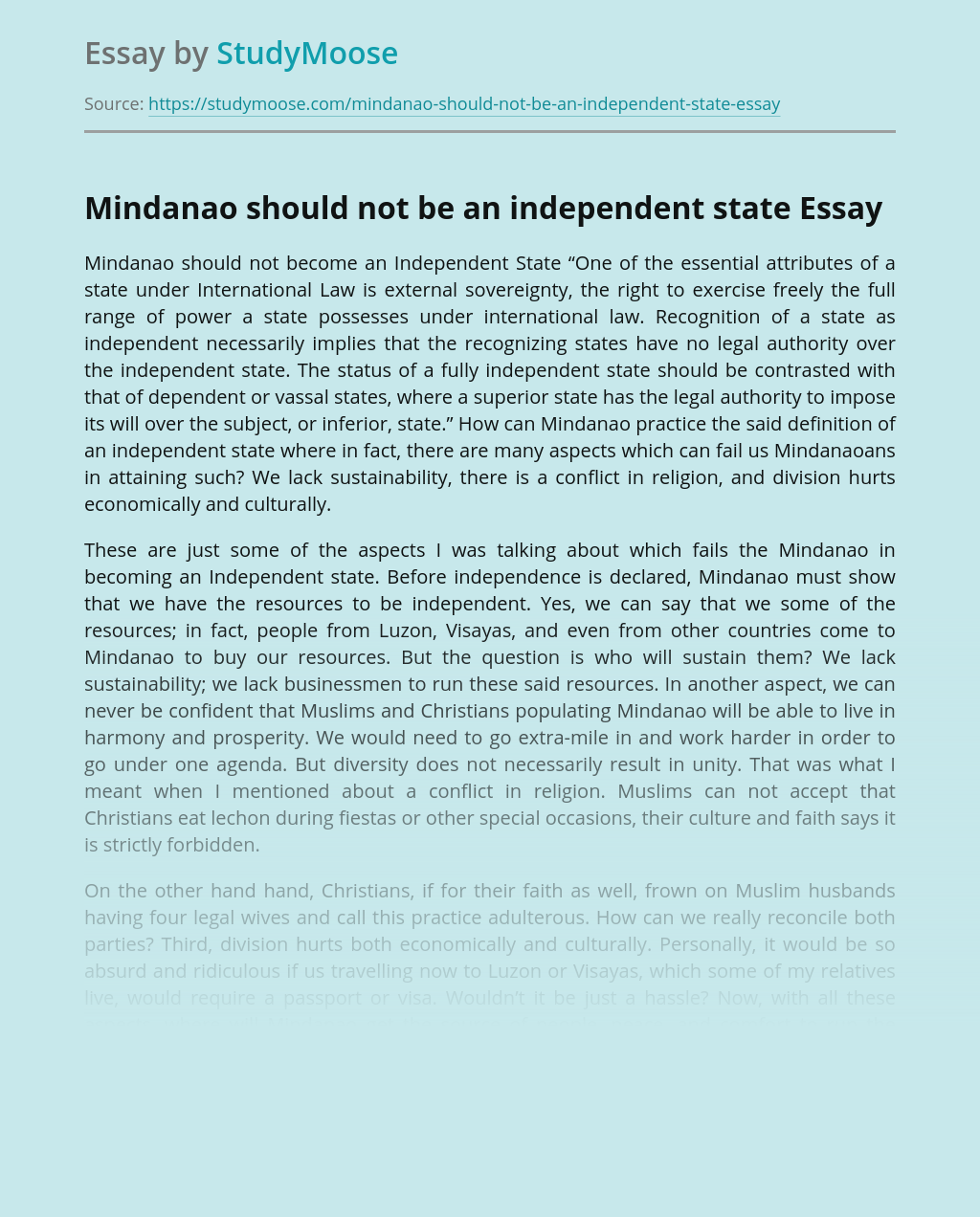 Turn in your highest-quality paper
Get a qualified writer to help you with
“ Mindanao should not be an independent state ”
Get high-quality paper
Helping students since 2015
Stay Safe, Stay Original