In ancient Greek mythology, is said to live an athlete named Milon. Strength, determination in every fight is very inspiring. The name was later adapted into MILO, the energy to win every day. MILO is an energizing chocolate drink with a unique and delicious flavor that is preferred. Made from natural ingredients nutritious, rich in vitamins and minerals. In 1934, MILO launched first in Australia and then spread to different parts of the world. In Indonesia, MILO introduced in Indonesia in 1974. Mewujudkan a healthier society is the mission of PT.

Don't use plagiarized sources.
Get Your Custom Essay on Milo Customer Segmentation Just from $13,9/Page

Nestlé Indonesia. When in 2001 the government heavily campaigned INDONESIA CHAMPION, MILO was invited to Indonesian children’s love and achievement in the field of sports. 2002 for the first time held MILO School Competition, young talent in the sport of badminton. Until now, the competition is held annually for children of primary and junior high schools in Indonesia.

Generally people prefer to drink Milo throughout the year. But Nestle can segment the market on the basis of the season .

Consumption of cold Milo down during the rainy season because people prefer to have a hot Milo. In hot regions consumption patterns have not changed much.

Milo consumption more in the cities than in the villages due to various factors such as income and education levels. Nestle should more focus on making available in the Milo were people every willing and able to buy.

Nestle can easily target different age groups. The most important of these groups are children and the elderly. The kids can introduceMilo with additional nutrients such as vitamins and minerals. For older people it already has clinical nutrition. It just needs to get the product known among these people .

People will buy Milo when they have sufficient monetary resources. Nestle should target those at higher income groups. People with blue-collar jobs can be targeted by saying that Milo will help them in their daily routines. Life cycle stages can also be important for families with young kids will want to buy Milo. Psychographic segmentation :

People belonging to the higher social classes tend to spend more on luxury than those in the lower classes. Such people can be easily targeted because they are very health conscious. Nestle can encourage people to buy Milo who lacks rich foods .

And outdoorsy people who are involved in sport can also be targeted by tagging the brand with a sports celebrity.

MILO is a brand which is famous for delicious and nutritious beverage products enjoyed by families from generation to generation, with a definite chocolate flavor. Favors drunk warm or cold with milk chocolate contains healthy for the body. And that definitely favored so many people in many countries including Indonesia. 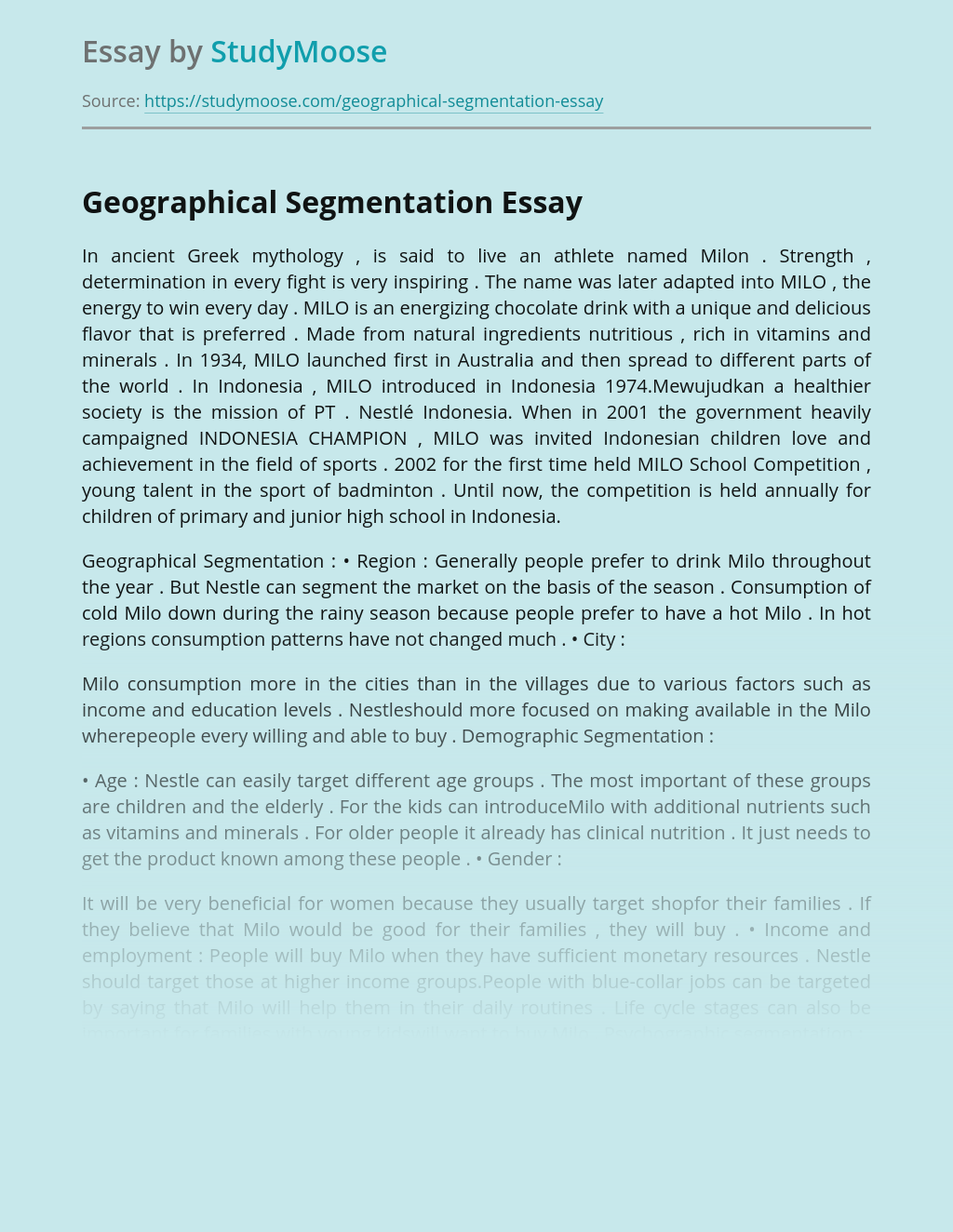 In ancient Greek mythology, is said to live an athlete named Milon. Strength, determination in every fight is very inspiring. The name was later adapted into MILO, the energy to win every day. MILO is an energizing chocolate drink with a unique and delicious flavor that is preferred. Made from natural ingredients nutritious, rich in...

Ferrero Rocher is the one of the multinational corporation in the world via the product: Ferrero Rocher that is kind of the chocolate and the it has a luxury perception to the customer who have some of reason that are price, packaging, and etc. As it is a FMCG (Fast Move Corporation Goods) in Malaysia,...

Chocolate is one of the most popular food types and tastes worldwide. Chocolates have ended up being traditional presents among specific vacations; chocolate bunnies and eggs on Easter, chocolate hearts or chocolate in heart-shaped boxes on Valentine’s Day. Chocolate is likewise utilized in cold and hot beverages, to produce chocolate milk and hot chocolate. A...

-Chocolate is one of the oldest treats enjoyed by many people. I have loved chocolate ever since I was a little girl. I have enjoyed the different tastes, textures, and styles of it. I want to share with you the history of chocolate, types of chocolate, and some benefits from eating chocolate. Chocolate’s history started...

Chocolate is typically sweetened food produced from the seed of tropical Theobroma cacao tree. Although cacao has been cultivated by many cultures for at least three millennia in Maxico and Central America, its earliest documented use is by the Olmecs of south central Mexico around 1100 BC. In fact, the majority of Mesoamerican people made...