Arthur Millers Drama is based on the Salem witch trials of 1692. He wrote the play much later than 1953 as an indictment of the anti-Communist tactics of Joseph McCarthy. Miller recognised there was parralel between the hysteria which swept Salem in 1692 and the anti-Communist witch hunt which raged though America during the 1950’s ‘Red Scare’. During reasearch I found that Miller chose this subject as it contained mass hysteria and he wanted to show what its social and psychological consequences might be, which reflected the possible consquences of the MacCarthy Era.

The Language throughout the play are powerful, evocative and memorable, such as Elizabeths behaviour as ‘an evalasting funeral’. How ever at important climax’s such as the last few minutes of the play the languages’ rythm is monosyllabic like the beat of a drum. ‘What profit him to bleed? Shall the dust praise him? Shall the worms declare his truth? Got to him, take his shame! ‘ The Crucible’s strucure contains four acts where the supernatural dabblings increase into a more and more desperate situation.

This structure emphasises the chaos of the play which is closely linked with the super natural theme.

Aswell as the main structure, Miller has constructed a structure inside each act. This stucture is that of calm and quiet as there is not much happening at the begining of each act and then this evolves into a climax of chaos, great emotion and hysteria. The play is opened in this way with a simple set which reflects their life style and allows the audience to concentrate on the emotional issues and scenes of the play.

However, it involves the immediate theme of religion as we find Reverend Parris praying.

Miller is very intense on the detail of stage directions and states that ‘though we can not hear his (Reverend Parris) words, a sense of his confusion hangs about him. ‘ These directions are interesting as they also introduce a linking theme of confusion which is increased between the accusing girls and the other characters. The religious theme is portrayed with many techniques. One of which is the cotumes of the characters. The costume would be typically puritanical as it would be be simple and modest. Traditionally the women would have worn white bonnets, showing their purity.

One may react to their practical understated clothing reflecting thier pious nature. Abigail always wore buttons undone which emphasised her lusteous nature. There is also a significance of light which produces a feel of region as it is thought to be ‘the light’. An example of this is also at the start of the play (Act 1) ‘There is a narrow window at the left. through its leaded panes the moring sunlight streams. ‘ It is interesing how is spersifically states for ‘leaded panes’ as this gives a sense of inclosure and prison. Miller also uses the aspect of light at the end of the play ‘…

And the new sun is pouring in upon her face,… ‘ the aspect and use of light here of the ‘new sun’, symbolises a new life after this tragedy. This technique many inspire the audience to want to know what will happen next. Reverend Hale is met carrying books, he quotes ‘they are weighted with authority’. (Act one) Miller’s stage directions to Parris is for him to act ‘a little scared’. This first meeting with authority is bold and direct which allows the audience to realise the cultures differences on authority compared with todays living.

The ‘wieght of authority is also brought back in Act Three with the setting of the vestery room. The setting describes, ‘Heavy beams jut out,… ‘. This setting reflects the weight and aurthority of the judges also. The furniture is also interesthing as it prtrays the status of perticular classes. For example the villages have the ‘plain bench, which reflects their ‘plain’ living. In the ‘centre there is a rather long meeting table,’ this table has ‘stools and a considerable armchair snugged up to it’.

This arm chair would be where the Judge would sit which describes his authority as the sense of a’considerable armchair’ makes us visulise a throne. An relating theme along with Authroity comes Hypocrisy. I relate this theme with the judges as there actions are hypacritical; as soon as you were acused of being a witch, there was no way out. You were either hung or branded for life. Their judging towards the end became tottaly irrational as the confusion amounts. I mentioned before that confusion was a theme introduced at the beging of the play as Reverend parris mumbels words of prayer.

This confusion of parris and the judges links parris as being most judgemental which is odd in a Reverend as they are suppsoe to be all giving. Abigails character introduces the theme of sex and lust as she minipulates the situation with the supernatural games to succeed in winning John Proctors heart. This miniplulation leads into Johns death, which is ironic as Protor in Act one tells Abigail that she will be ‘clapped in the stocks’ before she is twenty, and it is Proctor, the hard working man with a kind heart heart is hung because of her.

Proctors character has commited adultery previously with Abigail. When told of the accusation against Elizabeth, Hale quetions Proctors strength in religion as he does not attend church, he then asks John so resite the ten commandments, he repeats ‘Thou shalt not make unto thee any graven image,’ as he has forgotten the commandment ‘ Thou shalt not commit adultery. ‘ This irony builds the teeth clenching climax as the audience is to favour Proctor. It may also brig in mew questions such as ‘Does Proctor not deep down think what he has commited is sinful? ‘ or may it be that ‘Does he concience decite him? ‘ 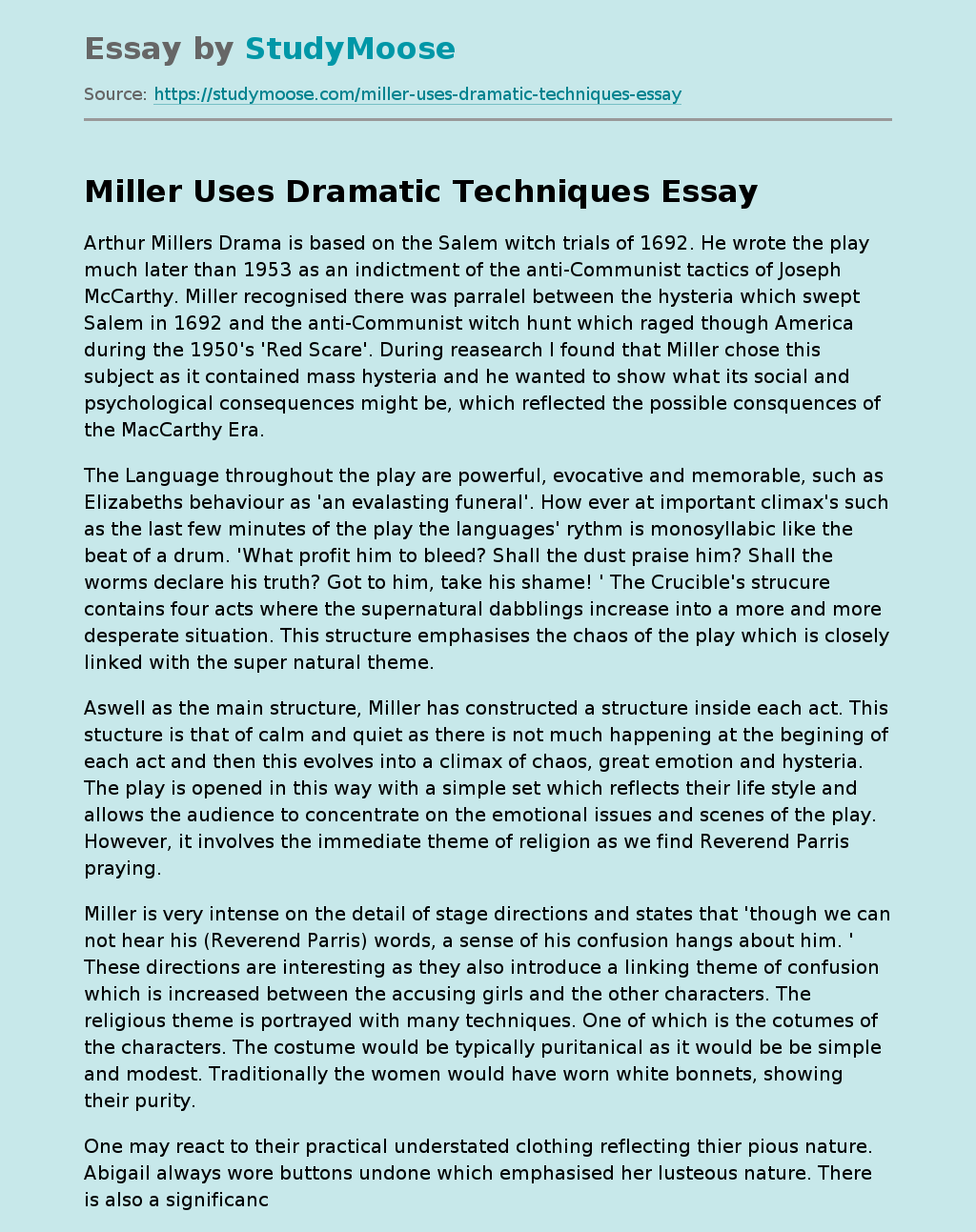