Military metaphors are commonly used in everyday conversation. During these uncertain times, politicians exploit this at the drop of a dime. Strategy, tactics, ammunition and arsenal, words with pure military meaning, are used frequently in the current political atmosphere. Some other examples of military metaphors that come to my mind are: Spearheading the discussion, Getting off your high horse, Closing ranks, Boots on the ground, Rally the troops, The rank and file. This comes at a time when the number of politicians who served in the military is at an all time low.

Don't use plagiarized sources. Get your custom essay on
“ Military Metaphor in Political Rhetoric ”
Get custom paper
NEW! smart matching with writer

For those of us who serve in the Military, we live and die upholding the warrior ethos. This is a noble, courageous and selfless act that defines a true hero. I feel this is not a blueprint for civilian society. For us in the Army the following ethos is placed before their own wellbeing. I will always place the mission first. I will never accept defeat. I will never quit.

I will never leave a fallen comrade. The problem with a military metaphor isn’t the sentiment behind us – there’s nothing wrong with the various politicians calling on the nation to emulate the selfless model of soldiers in combat, or to urge unity in action.

There are times when military metaphors apply to civilians, an example of this was on September 11, 2001, and the Nation did stand tall in the face of danger. The problem is when that metaphor is fused with desired self-serving political interest. An example of this is when voting for a particular bill is equated with the selfless heroism of fallen soldiers.

We have discussed how we are programmed with the misrepresentation of the military metaphor. In a society where one percent wear the uniform, a large remaining percent throw military metaphors as if they are hand grenades. To those who might say this is rude of me I say the following” put the shoe on the other foot” and spend some time in a war zone and see those close to you flying home on a medevac or worse.

Military Metaphor in Political Rhetoric. (2016, May 11). Retrieved from http://studymoose.com/military-metaphor-in-political-rhetoric-essay 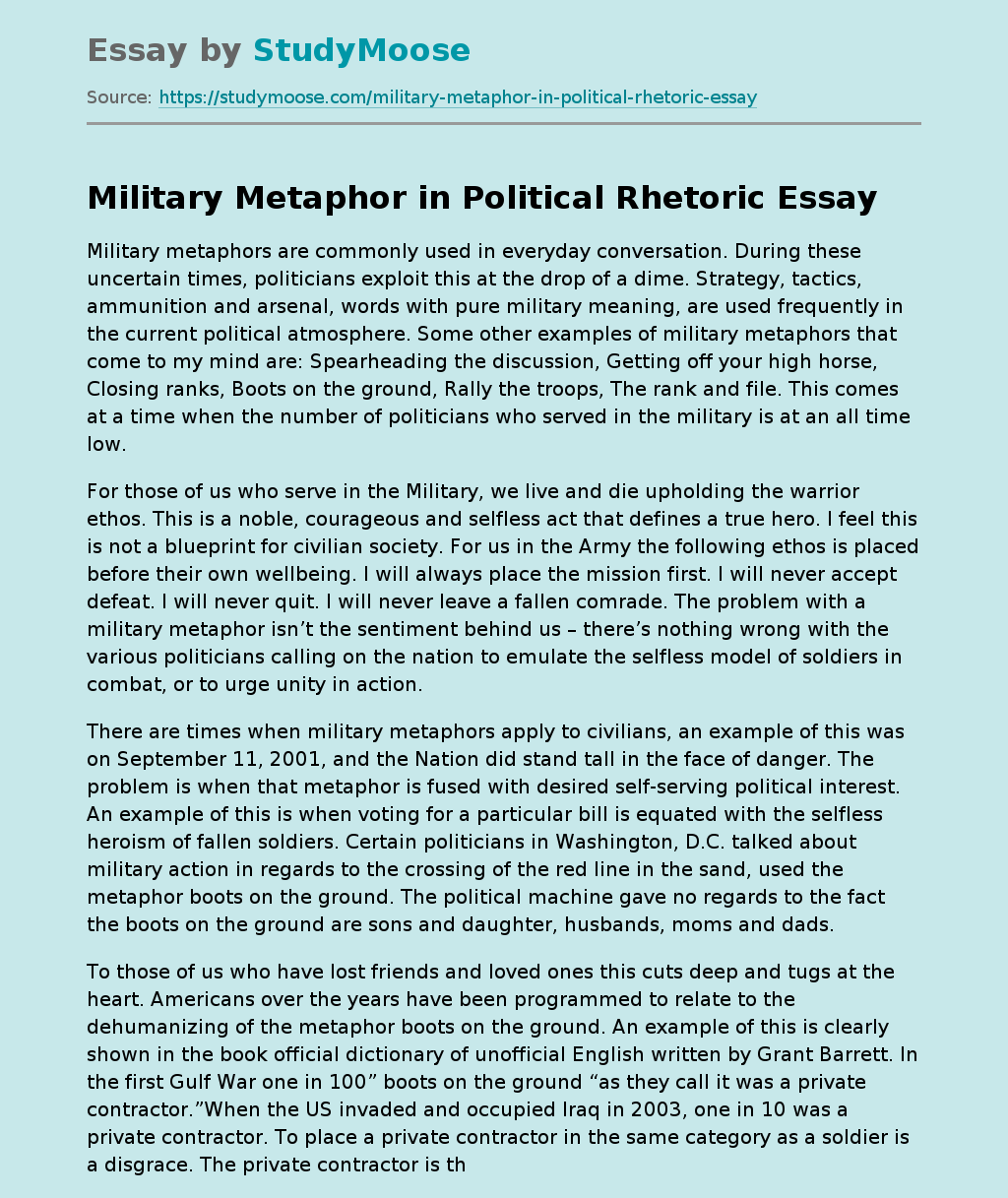