WAR SURPLUS PROPERTY AGREEMENT (Sept 11, 1946)
Ipinapaubaya ng US ang mga ari-arian nito (sa PHL) sa pamahalaan ng Pilipinas *but most of it were trash lol or broken from the war

OVERVIEW OF WHAT MBA IS
What is MBA?
The Military Bases Agreement of 1947 (MBA) is a joint agreement between the Philippines and the United States signed on March 16, 1947. This treaty officially allowed the US to establish, maintain and operate air and naval bases in the country.

It provided for about 23 listed bases and utilities for use by Americans for a period of 99 years. Most important of these bases were the 180,000 acres Clark Air Base in Pampanga, the biggest American airbase outside of the continental USA; and the Subic Naval Base in Zambales. Other provisions of the 29-article MBA are the following:

Mutual protection and cooperation between the two countries including the use of American and Philippine military installations Philippine government was prohibited from granting any bases to any other nation without US consent The US was permitted to recruit Filipino citizens, on voluntary basis, for service in American military American base commanders had the right to tax, distribute utilities, hand out licenses, search without warrants, and deport undesirables Complementing the MBA was the signing of the Military Assistance Agreement of 1947 and the Mutual Defense Treaty of 1951.

Disputes and Questions in the MBA.
Disputes eventually developed concerning certain provisions of the treaty. These include the issue on the vast land occupied by the bases and criminal jurisdiction. Filipino nationalists also noted that the bases could invite attack from a country hostile to the US which will eventually drag our country into a war.

Revisions in the MBA
Aug. 11 – Dec. 5, 1956
The Garcia-Bendetsen conference resolved the issue of jurisdiction in the American bases. The US began to recognize sovereignty of the Philippine government over the base lands. Oct. 28, 1959
Olongapo, which was then an American territory, was officially turned over by the US to the Philippines. Over the years, 17 of the 23 military installations were also turned over to the Philippines. Aug. 10, 1965

An agreement was signed revising Article XIII of the treaty wherein the US will renounce exclusive jurisdiction over the on-base offenses and the creation of a joint criminal jurisdiction committee. Sept. 16, 1966

The Ramos-Rusk Agreement reduced the term of the treaty to 25 years starting from that year. 1979
The MBA Review of 1979 led to the formal control of the Philippines of Clark
and Subic. Thus, making it Philippine military installations with US facilities inside it. It also provided for each base to be under a Filipino base commander; the Philippine flag to fly singly in the bases; the Philippine government was to provide security along the bases’ perimeter; and the review of the agreements every five years starting 1979. 1988

The Manglapus-Shultz Agreement provided for an increased compensation for the bases.

MBA Terminated.
On Sept. 16, 1991, the Senate rejected the proposed RP-US Treaty of Friendship, Cooperation and Security that will extend the bases to ten more years. Subsequently, the MBA was terminated on Dec. 21, 1992 when the 25-year tenure lapsed. Thus, prompting the US to vacate its bases effectively by the end of December 1992. The departure of the US warship Bellau Wood marked the closure of American military bases in the country.

After the US turn over of the military bases, the government transformed it into economic zones spearheaded by the Bases Conversion Development Authority, Subic Bay Metropolitan Authority and the Clark Development Corporation. The government also restored American military presence in the country through a new form known as the Balikatan exercises or the RP-US Visiting Forces Agreement (VFA) ratified by the Senate on May 27, 1999.

EFFECTS OF MBA
POSITIVE EFFECTS:
Employment opportunities
Local procurement of base goods and services
Personal spending by those Americans assigned to the bases are other important economic contributions derived from the presence of the bases.

NEGATIVE EFFECTS:
– MBA as symbol of neo-colonial relations between US and PHL – Clark and Subic symbolized Filipino women’s commercialization as “entertainers” and “hospitality girls” (prostitution)

WEDPRO’S STUDY in 1990:
– Focused on two major baselands  Clark Air Base in Angeles, Pampanga and Subic Naval Base in Olongapo, Zambales. – These areas at the time of the study had around 55,000-60,000 women and girls in the “entertainment” industry; the other base facilities also had prostitution as an industry but Angeles and Olongapo exhibited the most dramatic impact from and dependency on the US bases. SOCIO-CULTURAL IMPACT

The bases’ presence held the Filipinos (particularly those in the former baselands) captive to the ideological frame that Filipinos needed the bases not just for security but also as an economic resource. This mindset deeply affected Filipinos who continued to believe of the idea of the benevolent Americans who, in turn, regarded them as “brown Americans.” Women dreamt of marrying Americans to live in foreign land, they consider it as the only “salvation” to get out of poverty

AMERASIAN CHILDREN
– Receive no assistance from US and PHL governments
– Difficult to access educational grants
– Receive racist attitudes especially with black ams as fathers – 9 out of 10 were born out of wedlock
– 60% were properly registered
– 2/3 are raised by mothers alone
– 13% are under surrogate parents, 15% with non-relatives
– Almost 100% had no jobs or employed minimally
– Main needs: education, US citizenship, employment, housing, livelihood, and skills development

SEXUAL EXPLOITATION
– Prostitution and other forms of sexual exploitation were seen as normal in those communities – Red-light districts known as the “entertainment” section of the communities – Angeles City, 70 percent were in prostitution well before they were 18 years old – All forms of injustices against women were taken lightly

HEALTH CONCERNS
– Sexually transmitted diseases (STDs) and HIV and AIDS haunted the lives of the women. – Abortions were common (drug- induced abortion were used by those who could not afford to go to a doctor) – Drug use and alcohol consumption dominated (tranquilizers, marijuana, cough syrup and shabu) – Anemia and respiratory infections as well as stress-induced illnesses VIOLENCE AGAINST WOMEN AND GIRLS

– Sexual harassment, abuse and rape
– Verbal and psychological abuse
ECONOMIC IMPACT
– Olongapo and Angeles, the economic activity generated by the presence of the bases and the movement of the US military was the main motor that sustained the city and the surrounding areas. – A complicit local government regulated the entertainment, including prostitution industry, and a large part of the retail trade and even housing sector was geared towards US military clientele. ENVIRONMENTAL DAMAGE

In both cities, the issue of toxic wastes remains

MORE ON THE EFFECTS OF MBA!
Employment is a major problem for the Aquino government, not only because of the economic decline which occurred during the last years of the Marcos regime increased unemployment, but also because the rapidly expanding population places tremendous demands on the government to create new jobs. David Rosenberg, an expert on Philippine labor, estimates that the government must create almost 750,000 new jobs each year just to keep up with the expanding labor force.

Against this rather grim employment situation, the military bases, the second largest single employer in the Philippines after the Philippine government
itself, take on additional significance. These jobs are very attractive because of the benefits associated with them and also because of the technical training that many of them afford Filipinos. Obviously, if the bases were not there to provide the employment opportunities they do now, there would be some severe economic dislocations confronting both the local communities surrounding the bases and the national government.

Local procurement of goods has increased appreciably during the late 1980s because of new base construction projects and improved Filipino capabilities to meet US demands. As an example, in earlier periods, Philippine farmers could not satisfy tough Department of Agriculture standards on the quality of food sold in American outlets. Many of these difficulties have been overcome, as reflected in the sale of large quantities of fruits, vegetables and other foods to the American commissaries.

American military personnel and their dependents also contribute to the Philippine economy through their purchases of local goods and services. A quick visit to the cities surrounding the major bases reveals the many establishments, from bars/restaurants to manufacturing shops, which cater to the American presence.

There are two other possible indirect advantages the Philippine economy receives as a result of the presence of the bases. The first of these is a better investment environment for foreign investors, and the second is U.S. assistance in obtaining international loans.

U.S. military officials argue that the bases provide an improved economic environment which contributes to regional stability as well as political and economic development in the Philippines, both attractive to foreign investors.

Military base. (2016, Apr 16). Retrieved from http://studymoose.com/military-base-essay 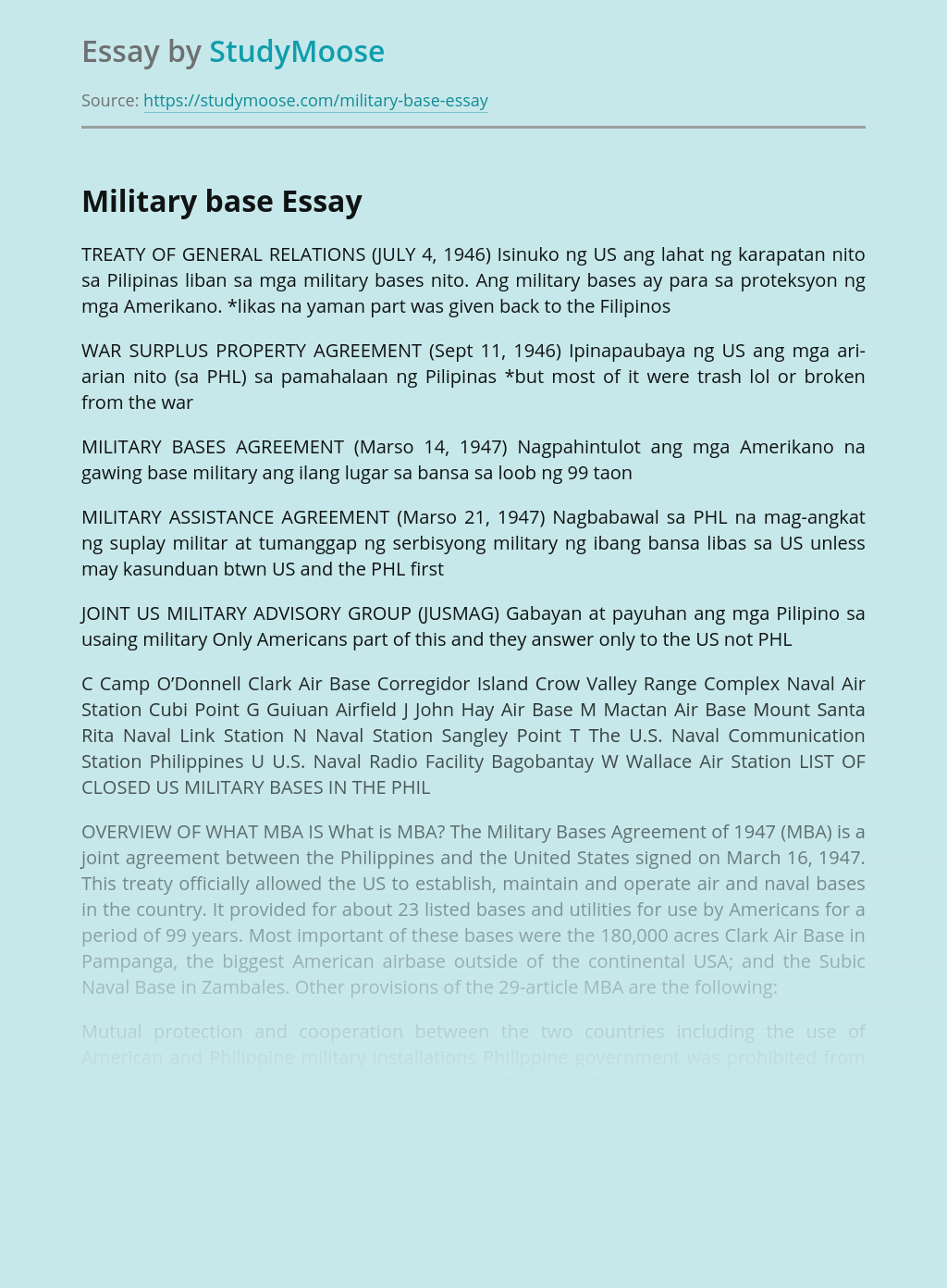