In the movie “Midnight in Paris”, there are a lot of interesting sights in the most beautiful city in the world. During the film, Woody Allen showed us how Paris is beautiful in the morning, charming in the afternoon, and enchanting in the evening, but it is magic and has a lot of surprising things after midnight.

Starting with the Eiffel Tower, there were a lot of iconic shots of Paris at its most touristic points like its beautiful streets under the rain, the famous river in the city ‘La seine ‘, and the broad gardens that makes this city the most beautiful destination for the famous artists who were looking for a quiet place to develop their talent as writers.

Don't use plagiarized sources. Get your custom essay on
“ Midnight in Paris Analysis ”
Get custom paper
NEW! smart matching with writer

The movie is a nice combination of Paris in 2010 and Paris in the past, when the famous artists and writers were there like Ernest Hamingway, F Scott Fitzgerald, Picasso, Gertrud Stein, and Salvador Dali.

Throughout the movie the director didn’t just show us Paris and its tourist locations, but also took us to destinations out of the city such as Versailles and Monet’s gardens in Giverny.

Then, there were all the warmly lit shots of the cafes, restaurants, and the famous shops such as Coco Channel and Dior. In addition, the beauty of the sights and the photos grabbed the viewer’s attention to want to watch this movie and to discover a lot of more information about some of the most famous artists in the early 19th century.

The movie “Midnight in Paris”, had succeed with participation of group of people who were capable and successful in their job as artists. The writer and director was Woody Allen, and the lead actors were: Owen Wilson, Rachel Mc Adams, and Kathy Bates. The cast was by Marian Cotillard, Michael Sheen, Adrien Brody, and Alison Pill. The studio was Gravier Production, Mediapro, Televisio de catalunya TV3, and it was made in May 20, 2011 by Sony Pictures Classics. The romantic comedy fantasy film had many unbelievable moments starting by discovering the city in the moment to traveling back in time each night after midnight.

On one hand, the movie had a lot of interesting moments between the past and the present. The story was about an American family who went to France for a business trip, and the two young people Gil and his fiancee were engaged to be married even though their mentality and their thinking were different. She used to argue with him all the time and she didn’t like him to be a writer as much as to work in Hollywood. Gil was the kind of person who likes to write and to be a successful writer, and by the time he was in Paris, he believed that this ity is the only place he will find himself in. Suddenly, and while he was walking around the Parisian streets, he found himself coming back in time to the 19th Century when all the famous writers and painters were there. Thus, this moment Gil had a big change in his life. Starting by breaking up with his fiancee and falling in love with a French woman. He found himself with the stars of art in Paris in its golden time, and he didn’t believe that he had a lot of conversations with the best writer ever, Ernest Hamingway.

On the other hand, Paris in its golden time was the best destination for a lot of artists around the world. Ernest Hamingway was an American author and journalist who chose to live in the city of art, Paris in the golden age. His economical and understated style had a strong influence on 20th-century fiction, while his life of adventure and his public image influenced later generations. Hemingway produced most of his work between the mid-1920s and the mid-1950s, and won the Nobel Prize in Literature in 1954. He published seven novels, six short story collections, and two non-fiction works.

Three novels, four collections of short stories, and three non-fiction works were published posthumously. Many of these are considered classics of American literature. Hemingway was raised in Oak Park, Illinois. After high school, he reported for a few months for The Kansas City Star before leaving for the Italian front to enlist with the World War I ambulance drivers. In 1918, he was seriously wounded and returned home. His wartime experiences formed the basis for his novel, A Farewell to Arms. In 1922, he married Hadley Richardson, the first of his four wives.

The couple moved to Paris, where he worked as a foreign correspondent, and fell under the influence of the modernist writers and artists of the 1920s “Lost Generation” expatriate community. The Sun Also Rises, Hemingway’s first novel, was published in 1926. In my opinion as a viewer, Hemingway was one of the most interesting personalities in the movie because he had made a change on lot of artists after him and he was a good example for those want to be successful in their life as a Gil, and the most interesting part in the movie was the conversation that was in the old Peugeot car when they were talking about men and their fear of death.

Lastly, “Midnight in Paris”, had package of information everyone should know. Thus, I recommend watching this movie, because it wasn’t just a story like what we usually see in other films, but had much information about some famous artists in the 19th century. Also, we went back with the movie to see how those people used to live in nice and quiet world especially in the art city. Personally, I liked the movie from the beginning to the end, because and while I was watching it, I enjoyed its quiet music they used to listen to.

The music and the rain in the Parisian streets had made a beautiful picture about this city and also I enjoyed seeing some touristical places I had visited while I was in vacation there. In addition, I liked the story about Gil and how he was encouraging himself to get on the right way in the art, by having a good self-esteem, even though he had a lot of obstacles with his fiancee and her parents. 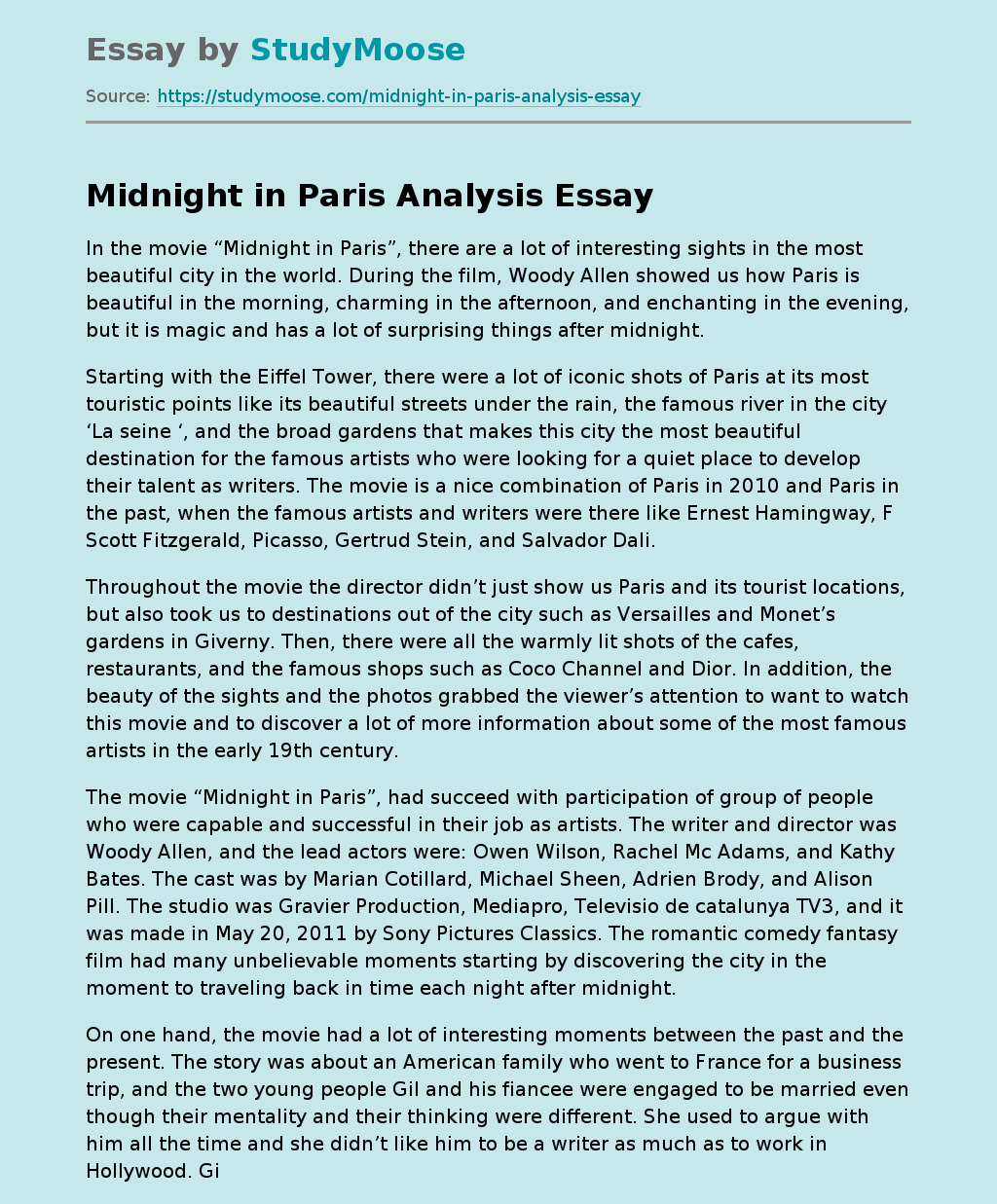