The set design for Blood Brothers was very effective and set the scene really well at the beginning of the performance. The props which were on stage at the beginning were; props designed to look like houses, these were particularly effective because they were realistic in the way that they were quite old and looked like they were old dishevelled council houses. They portrayed the image of the rough area that was 1960’s Liverpool. There were two rows of houses of about three and these were both situated at an angle on the far side of stage left and stage right.

Don't use plagiarized sources. Get your custom essay on
“ Mickey and Linda ”
Get custom paper
NEW! smart matching with writer

As the backdrop of the design a city style painting was used and in front of this was a bridge. Through the railings on the bridge you could seethe city backdrop. The set design was very detailed, the houses looked extremely real and the bridge, covered in graffiti really looked as though it was from Liverpool in the 1960’s. The set design for the Lyons house was very effective because it was fairly simple (often only had the table as the piece of furniture) and this helped it look like the large house it was by creating space.

When Eddie, Mickey and Linda are seventeen they go into town, the setting for the town is changed by putting a lamp post on set. This is effective and makes the set look like a town area. The lighting used throughout the play was amazingly effective, lighting brought emotion to the scenes which, without the lighting there, would not have been so moving.

Fairy lights were used at the beginning on the top of the city backdrop these created a city atmosphere as they looked like lots of lights from the houses that you would see from the view.

From this lighting and backdrop you got the feel that it was a very busy area and nothing like the countryside. The general lighting used when the children were playing was quite false light and looked a lot darker than the lighting which was used when the families moved to the countryside. This helped create the image of the city being cramped and miserable and the contrast to the countryside, which was sunny and free. The lights were a lot darker too when the children were playing outside, however, the lights were extremely bright when the audience was watching inside Mrs Lyons house.

The lighting, being very bright also exaggerated how big Mrs Lyons house actually was because like the set design of it, it helped create space. The bright even light made it look grand. The red light at the very beginning is very effective, because, as the play starts with the end it is very ambiguous and the red light helps with the sense of confusion. It represents blood:  the blood that was shed in the deaths  the blood that was shared because they were twins  the blood brothers Another very effective time when the red light was used is when the tension is being built up between Mickey and Linda.

For about five minutes of the play the audience try to dissuade themselves that Eddie and Linda will not fall in love, however the flirting becomes more often and no matter how much you don’t want it to happen it is inevitable that it will. We see Linda and Eddie meet and they run to greet each other and as soon as they touch the red light fills the whole stage, as though the whole relationship between Mickey and Eddie, the blood brothers, has been broken and it creates the image of blood filling the theatre.

The light here creates the feeling of tragedy and deceit. Towards the end of the play when Mickey was in depression and all the happiness was gradually going, the lighting also became more and more gloomy and morbid. There was rarely ever a full brightly lit stage after Eddie and Mickey had fallen out. Because the actors and the lighting were so good together it made the audience feel depressed. The music throughout the musical was what made it so effective in my opinion. 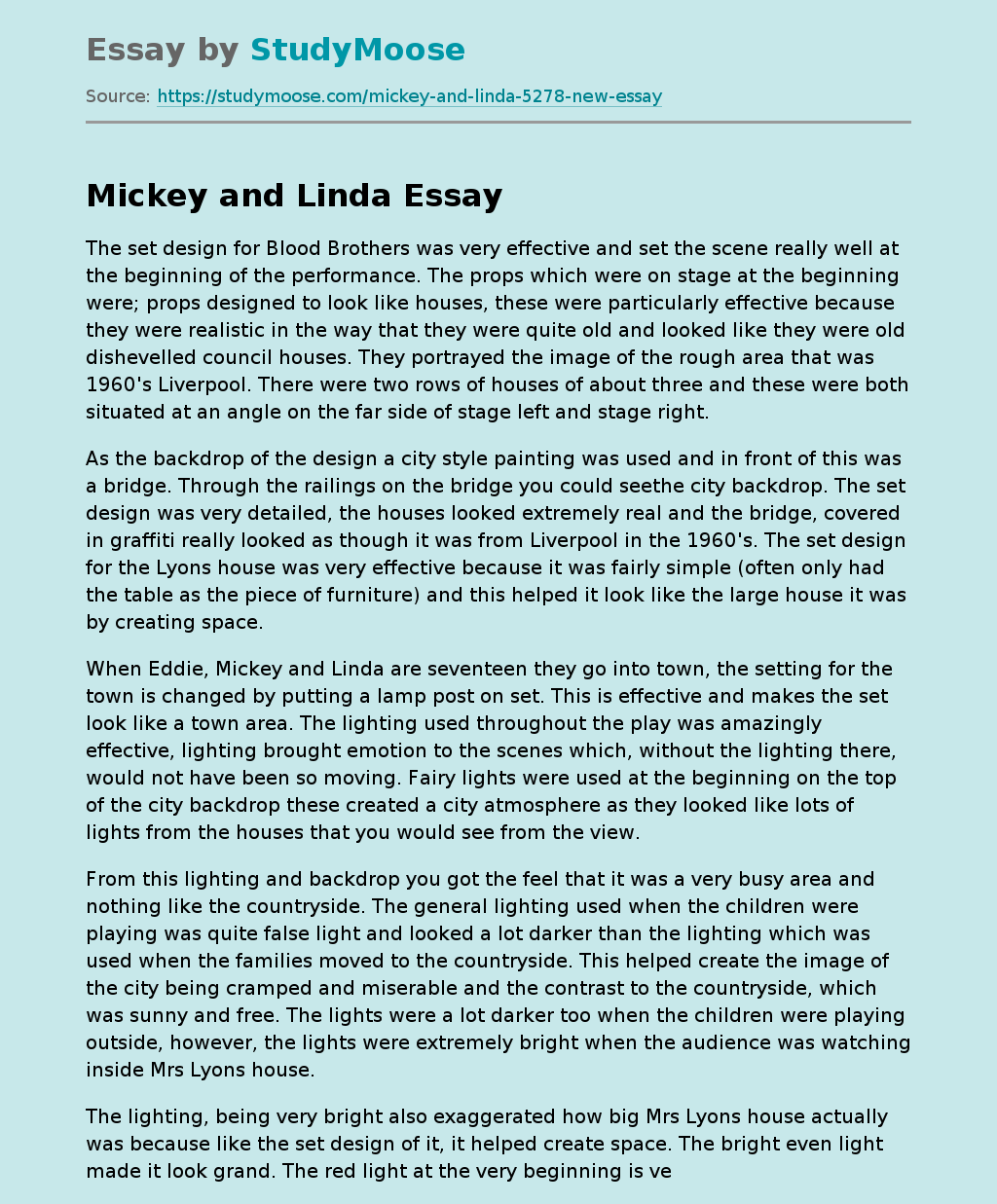