Michael Ondaatje’s “Elizabeth” portrays the life of the English Queen Elizabeth I. Ondaatje fuses prose and poetry, fact and fiction, realism and surrealism. The effect of this fusion creates a high degree of dramatic realism. It illustrates the progression and transition from childhood to adulthood.

The Poem opens with a young Elizabeth harvesting apples with her father (King Henry VIII) and Uncle Jack (fictional character); preceded by a trip to the zoo. The atmosphere suddenly shifts from going to the zoo, to ice fishing with Philip (King of Spain) on a cold winter day.

Don't use plagiarized sources.
Get Your Custom Essay on Elizabeth: English Queen Life Just from $13,9/Page

Abruptly, the atmosphere and time shifts again to describing Mary’s (Elizabeth’s stepsister) teeth. Then jumps to a dancing scene with Elizabeth’s confidant, Tom (Lord Thomas Seymour), which is followed by the execution of Tom. Finally, the poem ends with a rather short description of Elizabeth writing poems with another confidant, the Earl of Essex.

The narrative lines and descriptive passages employed in “Elizabeth” do not flow logically and coherently from point A to point B.

The names do not appear to be in historical and chronological order; however, they fit into a generalized image of the political mayhem, betrayal, and punishments of that time. Elizabeth’s stepsister “˜Bloody’ Mary Tudor, Mary’s husband Philip II of Spain, the unfortunate Lord Tom Seymour, and her late favorite, the Earl of Essex, were all executed.

Ondaatje’s “Elizabeth” alters from child-voice through adolescent-voice to adult-voice, catching the tone of each stage of maturity. Ondaatje’s imitation of the tones shows how Elizabeth must, through debilitating maturity and complex situations, sacrifice passion to power, as how a young ruler would have to. For example in stanza three, Philip “broke the ice”(19) and “then he [Philip] kissed me [Elizabeth]”(22), suggests that love is deceitful, and is to be avoided. Furthermore in stanza five, “I kept the love in my palm till it blistered”(34) connotes that love is painful and not time-worthy. Death is present and apparent in last stanzas as both threat and momento mori (remembrance for the dead), even to the young mischievous girl who “hid the apple in my room/ till it shrunk like a face/ growing eyes and teeth ribs”(7-9).

The symbolic references to “apple”(2) and “snake”(12) conjure up the relationship between Elizabeth’s life to that of Adam’s and Eve’s. The evil, deceptive snake in Adam and Eve convinces Eve to eat the apple, which in the end leads to her downfall. Elizabeth’s father, King Henry VIII of England, compliments and sides with snake in the zoo, by describing it as “Smart”(16). This siding of the snake might indicate to the readers of the residing evil within him. In stanza three, the image of ice fishing and eating raw, uncooked fish implies a primitive and uncivilized way of living. A primitive life is a dangerous one.

The correlation between the snake, the father, and the primitiveness can lead to a sense of danger in Elizabeth’s life. Elizabeth senses the danger and evades it by becoming sly and controlling. This is indicated by the tonal transition in as she slides from thoughts of “Tom, soft laughing”(28) and “turning / with the rhythm of the sun on warped branches, / who’d hold my breast and watch it move like a snail / leaving his quick urgent love in my palm”(30-34), to his beheading, and finally to her later “cool”(44) flirtations “with white young Essex (45). Nevertheless, Elizabeth’s control of voice captures the readers’ attention.

“Elizabeth” is one example of Ondaatje’s attempts to defy traditional poetry writing. And he achieves it in the incoherency of events, the un-rhythmic lines and the irregular stanzas. 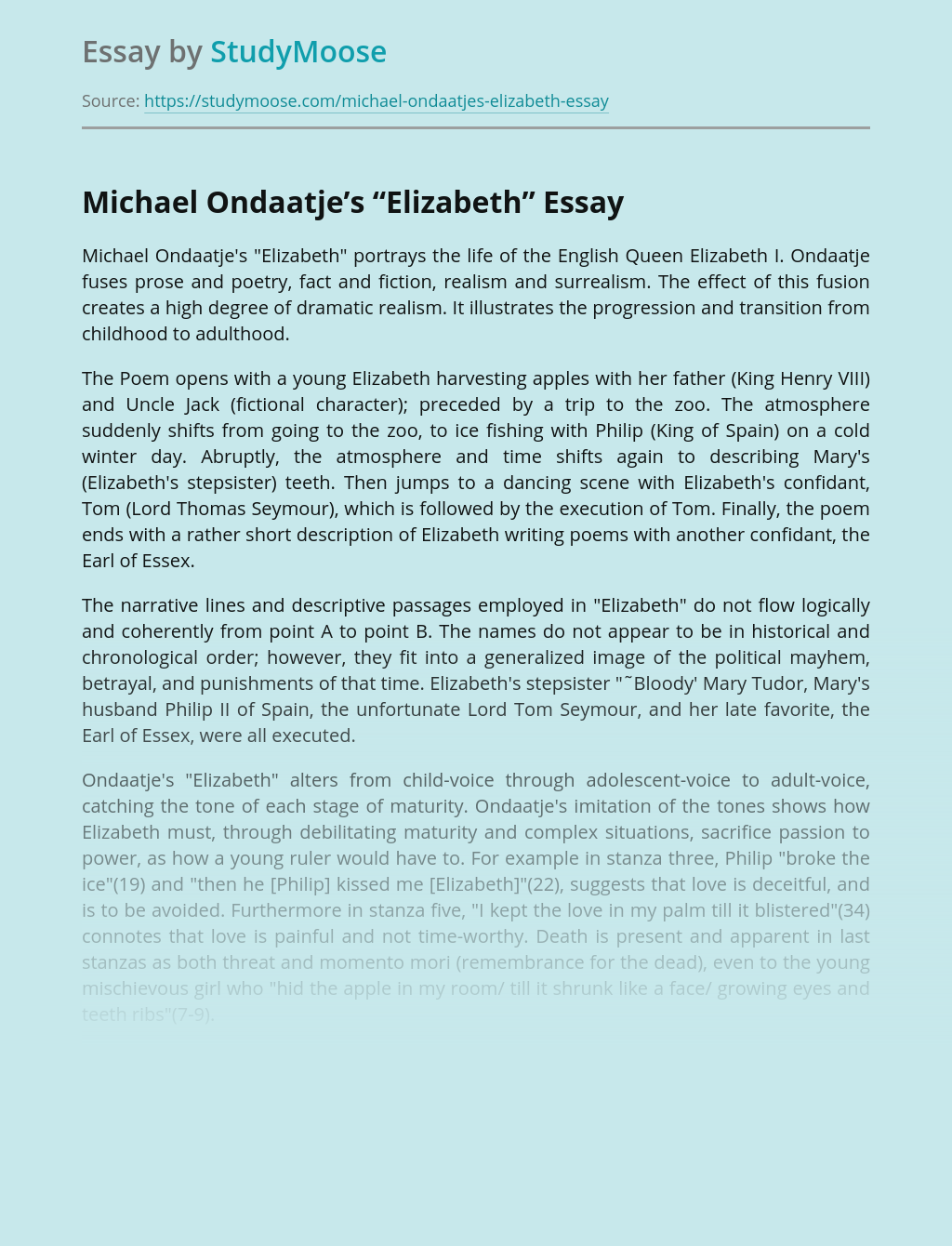 Thomas More’s Utopia and Thomas Hobbes’ Leviathan each offer alternatives to the worlds in which they lived.. More’s society, viewed through the character Hythloday, is seemingly based on man’s nature in society being generally good, and the faults of man emanate from how society itself is set up. Hobbes takes the opposite view of human...

Get Essay
Phillip II and The Armada in History of England

Why did Phillip II release the Armada and why did it fail? In the summer season of 1588, the catholic king of Spain, Phillip II, developed a plan to conquer protestant England. He would gather his army from the Netherlands and a huge fleet of 130 ships throughout the channel, with the aid of France....

Since the very beginning of the human era the particular rules were necessary for every pre-historian community to exist as the main principles of fair trade, the property, the state of the person in the society and moral standards needed to be defined. In our days these rules are commonly referred as law. Primitive pre-historian...