"Of Mice and Men" - focuses on the characterizations

“Of Mice and Men” By John Steinbeck

This classic is set in 1930’s California and tells of an unlikely pair of optimistic laborers who work the dusty vegetable fields of California. Their names are Lennie Small and George Milton… with George being the leader. Lennie is a man of tremendous size, but due to a mental shortcoming had the mind of a young child.

Don't use plagiarized sources. Get your custom essay on
“ “Of Mice and Men” – focuses on the characterizations ”
Get custom paper
NEW! smart matching with writer

George, on the other hand, was “small and quick and dark of face”. The book joins our characters on their way to a new job on a ranch in the Salinas Valley. They are hot and tired and bothered after being duped by a bus driver into walking about four miles. At this point they stop for a drink and a rest at a little at a watering hole (the Salinas River actually). At this point we discover that Lennie has a weakness for soft things.

. i.e mice and this had caused them to run out of Weed, a town upstate, after Lennie had grab the hold of a woman’s dress and refused to let go.

The woman then thought she was being attacked and the townsfolk sent a lynch mob after George and Lennie. They managed to escpae after hiding in a drain pipe that whole day. This incident greatly angers George because it lost them their job and out their dreams one step further away.

Their goal was to own a shack and an acre of land that they can call their own and to live of the “fat of the land’ and Lennie wanted to rasie rabbits. This telling of the their dream was greatly loved by Lennie.. especially and only when George told it to him (altough he knew it word from word). George also blames his current situation of down and out luck on Lennie because he has to always keep a look out on his behalf. Knowing that there was a great possibility that something like the incident in Weed would happen in the new ranch, George tells Lennie to run like the wind and return to this place near the water and hide in the bushes for George to come.

After spending a night at the riverbank… Lennie and George head up to the ranch where they had found work. Post being introduced to their quarters and some of their bunk mates.. they meet the boss and they excecute the tension filled process of the interview for the job. George does most if not all of the talking obviosly for fear of Lennie saying something that would cost them the emplyment which they badly needed. Luckily, they manage to land the jobs. Not long after, Lennie has his first run-in with Curley, the bosses son but nothing happens. They learn about Curley’s tarty wife and her exploits with the “eye” and George realizes that the potential trouble makers are Curley and his wife.. they both could make Lennie do something bad and George warns Lennie about this. The following scenes are insignificant introductions to the smaller less important characters. They feel their dreams start to materialise after Candy decides and is allowed to join them. While they discuss the financial aspects of purchasing the land, the rest of the bunkers come in the form of Slim and Carlson along with Curley. There was a disagreement between Slim and Curley and he (Curley ) had all this mounted stress and tension that he unloaded onto Lennie for no reason. After a few minutes of passive resistance to Curley’s beatings and George’s encouragement to hit him back, Lennie grabs a hold of Curley’s fist and breaks it. This was their last confrontation as Curley had no choice but to back down or be embarrassed.

Everyone except Lennie then decides to go to Soledad ( a nearby town) to help Curley fix up his hand and Lennie goes to have a chat with Crooks, the black stable-boy about the precious puppies, one of which had been given to Lennie by Slim. The next day is the moment of truth.. sitting alone in a barn, mourning the death of his puppy which he killed because it tried to bite him, Lennie is approached by Curley’s wife. Remembering that George said not to talk to her.. Lennie tries his best but ends up doing so in his own childish manner, telling her about his rabbits that George won’t let him have if he found out about the dead puppy. Curley’s wife then begins to tell her tale of woe to Lennie, about how she wanted to be a movie star and how she had married Curley solely as a method of revenge against her mother and didn’t like him one bit. She then finds out that Lennie has an affection for soft things and puts his hands atop her head to feel her soft locks… after feeling her hair about for a bit, she complains to Lennie that he is messing up her hair but he obviously doesn’t listen because he had given into his sensual self. Curley’s wife begins to yell for him to let go and Lennie goes into a state of panic and covers her mouth with his huge hands and begins to rustle about when suddenly she “flopped like a fish” for Lennie had broken her neck. For a moment he seemed bewildered that she wasn’t moving when he realises that he has done a bad thing and George would be very angry at him. All Lennie cared about was how it would affect George and what George would do to him.. Covering her in hay, Lennie runs off to his secret hide out near the river that he and George had worked out earlier.

After the men had lost their pre-occupation, Candy comes into the barn looking for Lennie and finds Curley’s wife sprawled out, half-covered by hay and he realises what has happened. Candy informs George first about the tragedy. George studies the situation and knows where Lennie has run to and the results that would ensue if Curley and his mob caught Lennie.. so he (George) formulates a plan to buy Lennie some time. George got Candy to scream at Curley’s wife as if he had just found her there and that atrracted the attention of the men who were outside playing a game of horseshoes and all of them ran into the barn. Slim checks her pulse as Curley erupts into a fit of rage and starts to organise the lynch mob to pursue Lennie. At this time Carlson realises that Lennie has stolen his Luger and everyone considers Lennie to be armed and dangerous.

All this time Lennie sat greiving at the riverbank and had visions of his Aunt Clara and giant rabbits cursing him and condoning him. Then George finds him and Lennie is worried about George giving him hell, and how George always said that Lennie weighed down his future. George was surprisingly calm and had to do what he could to save Lennie from the mob. Taking the stolen Luger from Lennie, George tells Lennie one last time about their dream place and how they would live of “the fat of the land” and Lennie begs to go to that paradise of his with his heard of rabbits to tend. George then aims the gun at Lennie’s head as he (Lennie) is looking out to the other side of the river and pulls the trigger…. As soon as he kills his friend and lifelong brother. the mob arrives and George tells them what he did. Slim realizes what George goes through and tries his best to console him over a drink. 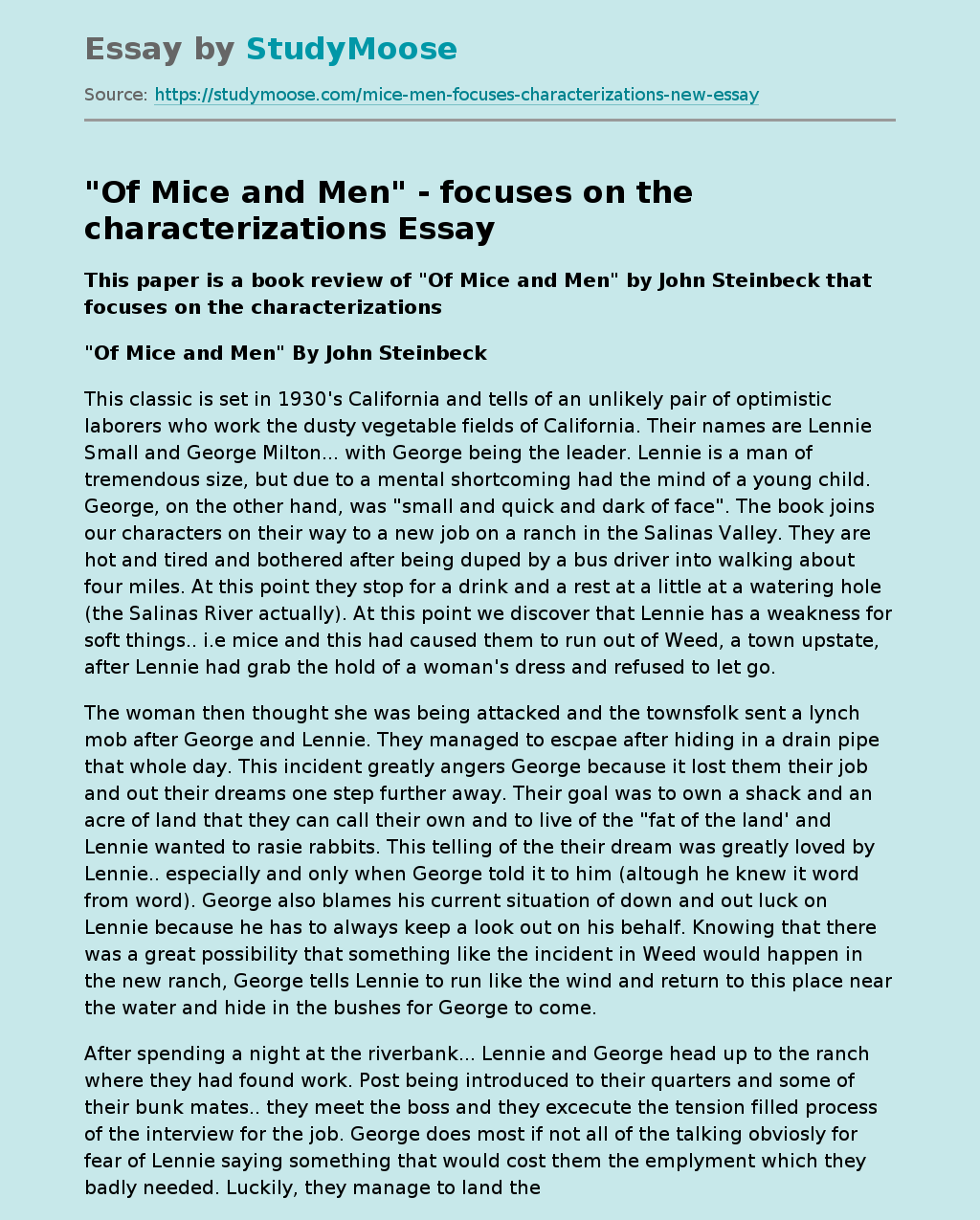