Mexican Independence Day is a major celebration in Mexico. It is bigger than Cinco de Mayo. The Mexican people celebrate with a fiesta, or party. The celebrating begins on September 15 (the eve of Independence Day). Crowds gather in the town meeting places of each city, town and village. There are many decorations that are the colors of the Mexican flag—red, white and green—and many flags are used. People sell confetti, whistles, horns, helmets and toys. There is also a lot of food to eat.

Don't use plagiarized sources.
Get Your Custom Essay on Mexico Independence Day Just from $13,9/Page

At the last strike of 11 o’clock, the president of Mexico rings the liberty bell and says, “Viva Mexico! All of the people across Mexico repeat it at the same time. Fireworks explode with the colors of the flag. September 16, the actual day, is similar to the Fourth of July in the U.

S. There are rodeos, parades, bullfights and horseback rider performances. They eat and think about the independence leader’s speeches. Independence Day in the U. S. is also a national holiday, as it is in Mexico. Many U. S. flags are displayed, and there are many decorations of red, white, and blue, the colors of our flag. People in the U.

S. dress in those colors, too. The Mexicans dress in traditional clothes or colors of their flag. Families get together for picnics or barbeques. We eat special foods, such as hot dogs or hamburgers, watermelon and homemade ice cream. The Mexicans eat special foods, such as, antojitos, candy and punch. The U. S. also has parades and special activities in the morning and afternoon, and then there are fireworks shows at night. The Mexicans also celebrate with fireworks to end the Independence Day activities. 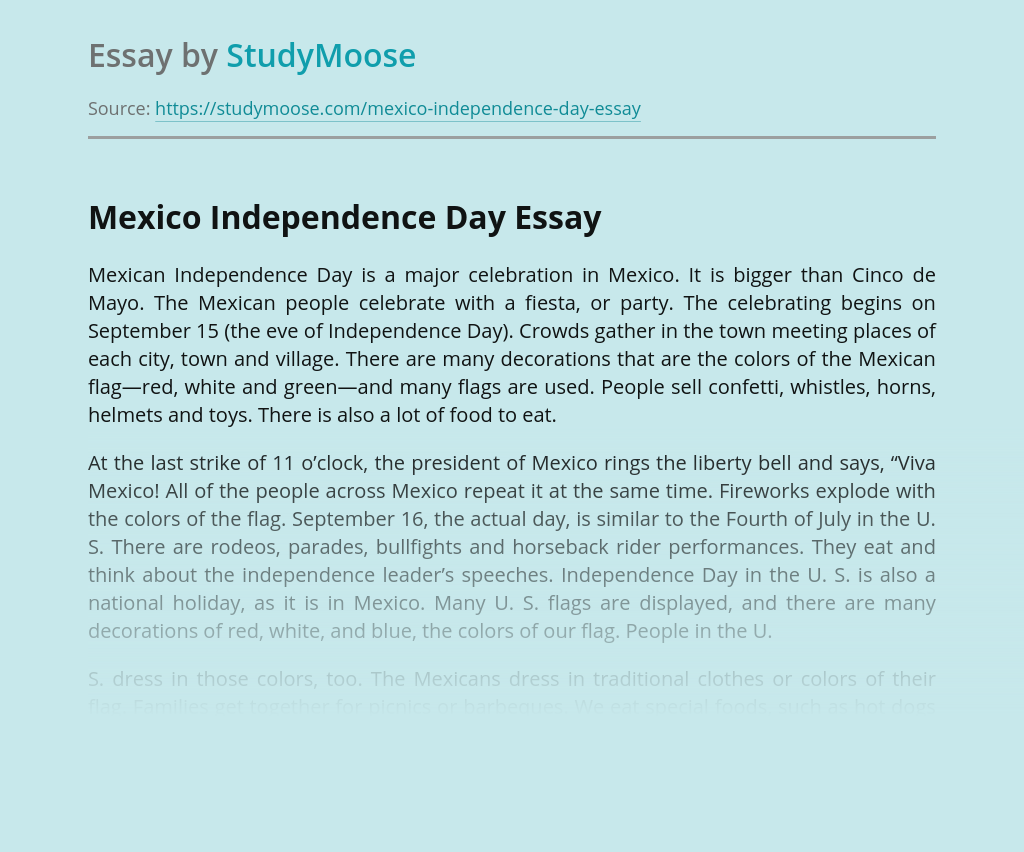 View sample
Was the Mexican War a “Justifiable” War?

The Mexican War has been an issue of contention ever since the war was formally declared. As a result of James K. Polk getting the go ahead from Congress and then authorizing American troops to begin attacking the much weaker force just for the self betterment of America, the war earned itself the nickname “The... VIEW ESSAY

As awareness and experience of the activity has grown, so has our need for a more comprehensive and detailed definition. Most recently (1999), Martha Honey has proposed an excellent, more detailed version: Ecotourism is travel to fragile, pristine and usually protected areas that strives to be low impact and (usually) small scale. It helps educate... VIEW ESSAY

View sample
The Mayans, The Aztecs, And The Incas

From 250 A.D. to the late 1500’s A.D., three advanced civilizations, the Mayans, the Aztecs, and the Incas controlled Central America and South America. Each of them was different but all shared some of the same qualities. They all were civilizations that had a daily life than revolved around religion. Their religions also required a... VIEW ESSAY

Botswana, located at 22.9906°S and 25.1557°E, is known to be the most advanced country in Africa, where poverty is common and at its worst. What makes this country covered, with a large wilderness and desert sand, a middle-income nation is its abundance of diamonds. Almost half of its economy is run off the selling of... VIEW ESSAY