The Culture in Mexico is rich in tradition and the people have a heritage that dates back to the indigenous population. Although there are many areas in Mexico that deal with poverty, there are also wealthy areas of Mexico. Mexico has a profitable exportation of goods and trades with many other countries. They also have a variety of weather patterns and geographical features. Their past military history and current organizations define the majority of their way of life. The Culture in Mexico has is shaped from its origin of the Aztec population to what we know today as modern Mexico.

Mexico has approximately 201,185 miles of highways and another 3,937 miles of expressways. The most traveled highways run between Mexico’s three most populated cities Mexico City, Guadalajara, and Monterrey.

These three cities form sort of a triangle within the country. Mexico’s highway system is widespread, however; they do not pay much attention to the maintenance because of a lack of government funding. They tried to fix this problem by giving grants to construction companies to help build toll roads but the massive cost of construction has led to high tolls and reduced traffic on these roads. The telephone network in Mexico is one of the most advanced in Latin America. A law passed in 2014 made it illegal for cell phone companies to charge for incoming calls when the receiver was in a roaming area.

In 2015, another law ended price increases for out of area calls to cell phones from landlines. Mexico also has an extensive cellular telephone network. The providers with most customers in Mexico are Telcel, AT&T, Movistar, and Virgin Mobile. Generally speaking the terrain and climate in Mexico is high-altitude rugged mountains with high plateaus in the deserts and some low coastal plains. The climate in the higher elevation areas can reach freezing temperatures and even have some snowcapped mountains. The majority of the rest of the area is mostly a hot dry climate. There are also two major deserts in Mexico the Sonoran and the Chihuahuan Deserts. Mexico City is the most populated area in Mexico with approximately 21 million people. Mexico has a military that has participated in several major conflicts and is approximately 383,500 strong.

The major military conflicts of Mexican history shaped the country into what it is today. The decisions made by past leaders of Mexico even created an alliance with the US even after a conflict between the countries. Much like the way the US gained its independence from Great Brittan, Mexico gained its independence from Spain via the Mexican War of Independence. The war between the people of Mexico and Spanish colonial authorities, which started in 1810 and ended in 1821. The Mexican War of Independence involved Mexican-born Spaniards, Mestizos, Zambos and Amerindians who desired independence from Spain. It started as a peasants’ rebellion against their colonial masters and ended with an unlikely alliance between the liberals and conservatives. Another significant conflict was The Mexican-American War, which started in 1846 and ended in 1848. This was the first US war fought on foreign soil. The Mexicans were politically divided and militarily unprepared.

The US on the other hand was expansion-minded at the time and the current presidential administration believed the United States had the destiny to spread across the continent to the Pacific Ocean. A small skirmish at the border started the fighting and several US victories followed ending with Mexico losing about a third of its territory to the US. When The Texas Revolution, aka the Texas War of Independence, was the military conflict between the governments of Mexico, led by General Santa Anna, and Texas colonists. The Texas Revolution began in 1835 and resulted in the establishment of the Republic of Texas after the final battle at Vince’s Bridge in 1836. The Battle of the Alamo was the most famous battle during the Texas Revolution. The Mexican Revolution was complex, bloody that lasted two decades, and 900,000 people lost their lives. It began in 1910 when a group attempted to overthrow the current ruler and Dictator Porfirio Díaz Mori. It was only in 1942 when the Mexican ex-presidents stood on the stage of the Mexico City Zocalo to show their support to Britain and America in the Second World War, that the citizens of Mexico saw their first glimmer of political solidarity and a country finally united.

Although most people do not think of Mexico as one of the allied forces that were eventually victorious in WW2 they did play a role. Despite longstanding tensions with the United States, Mexico would become a valuable ally to its northern neighbor, ramping up its industrial production and contributing vital resources to the Allied war effort. Mexican nationals living in the United States registered for military service during World War II. Mexico’s own elite air squadron the Aztec Eagles flew dozens of missions alongside the U.S. Air Force during the liberation of the Philippines in 1945. The Mexican Government and drug trafficking organizations have been involved in an ongoing conflict called the Mexican Drug War. In 2006 the Mexican military began to intervene to attempt to reduce the amount of drug-related violence.

The Mexican government has also made it clear they are trying to dismantle the cartels. Which would eventually lead to a reduced amount of drugs in the country and flowing into the US. They are not however specifically concentrating on the number of drugs being produced. Mexican cartels dominate the illegal drug market and own 90% of the cocaine entering the US. Mexican law enforcement has been reorganized multiple times since the 80s in an attempt to control corruption and reduce cartel violence. Mexico also created several elite Special Forces groups that consist of corruption-free soldiers who do battle with the cartels and defend against the corruption polluted system. To assist the Mexican government in their efforts the US has given them $1.6 billion to provide law enforcement training and equipment, the US also sent advisers to different law enforcement agencies to assist in strengthening the national justice systems. The official death toll of the Mexican Drug War is over 60,000 plus an additional 27,000 missing.

There have been several influential organizations in Mexico. One of them is the PRI political organization, which was known as The National Revolutionary Party. Plutarco Elías Calles, Mexico’s leader at the time and self-proclaimed Jefe Máximo, which means Supreme Chief of the Mexican Revolution, founded it in 1929. The party was created to solve the political crisis caused by the assassination of president-elect Álvaro Obregón in 1928. Calles was exiled in 1936 but the party continued ruling Mexico until 2000 and it became the Institutional Revolutionary Party.

In Mexico, the drug Cartels are very influential. They control the drugs and the drugs influence everything from the economy to the street gangs, crime, and government agencies. There are a couple of different major cartels operating in Mexico one of which is the Los Zetas Spanish for The Zs. They considered the most dangerous drug cartel in Mexico. The Cartel specializes in drug trafficking but is also involved in sex trafficking and gunrunning. The Los Zetas started the 1990s by members of the Mexican Army who went AWOL and began working as armed enforcement for the Gulf Cartel.[14][15] In 2010 Los Zetas completely split from the Gulf Cartel to form their own criminal organization and is now a rival of the Gulf Cartel.

At one point, they controlled more area than any other cartel in Mexico. The organization headquarters is in Nuevo Laredo, Tamaulipas, directly across the border from Laredo, Texas. Another Cartel considered to be influential in Mexico is the Sinaloa Cartel which is known by several other names such as the Guzmán-Loera Organization, the Pacific Cartel,[13] the Federation, and the Blood Alliance. They specialize in drug trafficking but also are involved in money laundering, and organized criminal activity. They started in the mid-1980s. The cartel headquarters is in the city of Culiacán, Sinaloa, with operations in the Mexican states of Baja California, Durango, Sonora, and Chihuahua. According to US Intel, the Sinaloa Cartel is the most powerful drug organization in the world.

The Culture in Mexico is shaped from its origin of the Aztec population to what we know today as modern Mexico. In conclusion, Mexico has a rich and diverse culture. They have a range of geographical features. Their climate allows them to farm coffee, sugarcane, and trade with the US and several other countries. Their past military history and current organizations define the majority of their way of life. 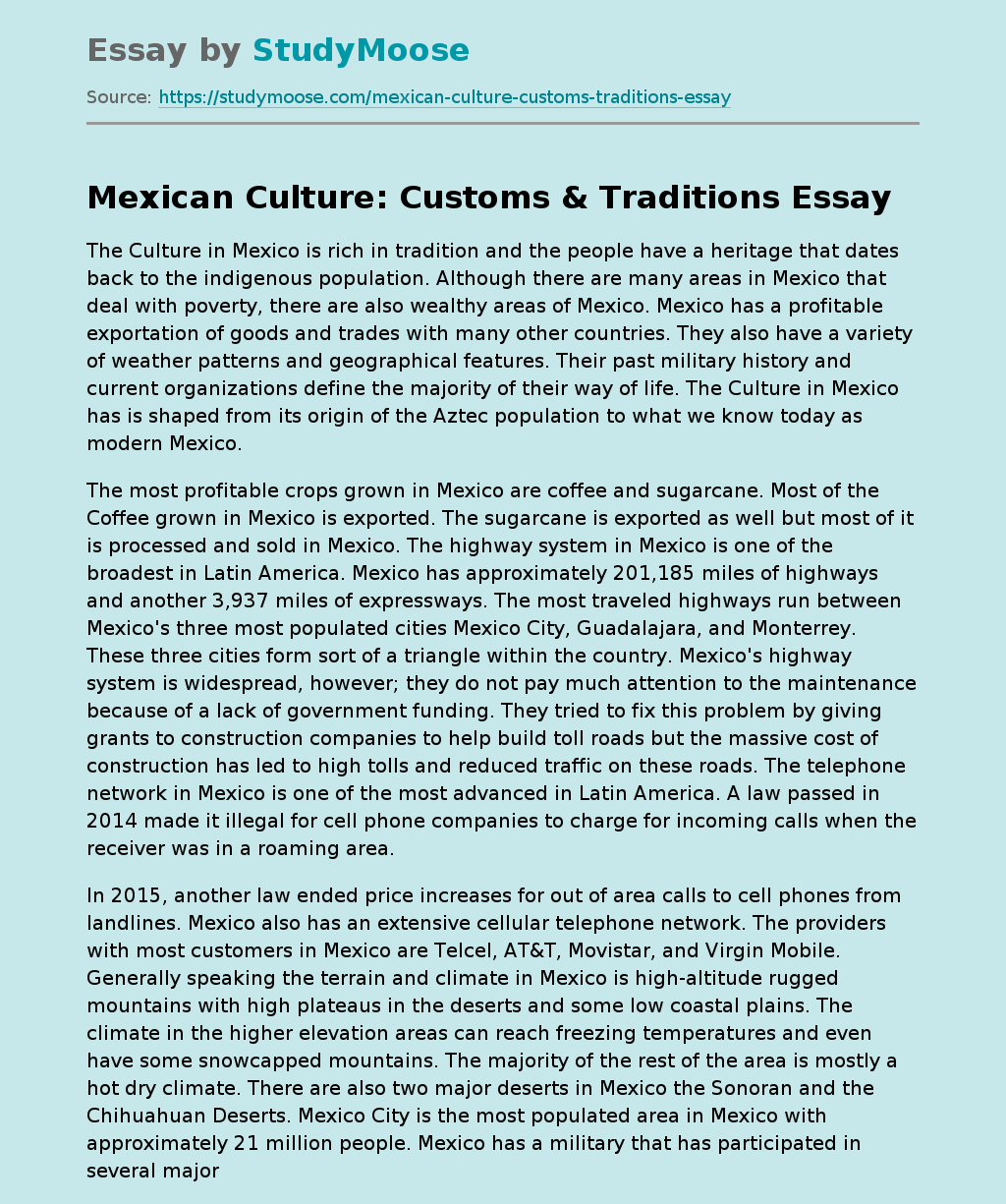