In philosophy, a term known as metaphysics, referred to the writings of Aristotle nearly three centuries after his death. Metaphysics is the area of philosophy that attempts to understand the basic nature of all reality, whether it is seen or indistinguishable we try to relate to our existence. It seeks a description so basic that it applies to everything, whether divine or human. In short, metaphysics attempts to enlighten what anything must be like in order to be at all. To call one a metaphysician in this traditional, philosophical sense indicates nothing more than his or her interest in attempting to discover what underlies everything.

Don't use plagiarized sources. Get your custom essay on
“ Metaphysics: objective Realism ”
Get custom paper
NEW! smart matching with writer

Old materialists, who said that there is nothing but matter in motion, and current naturalists, who say that everything is made of lifeless, non-experiencing energy, are just as much to be classified as metaphysicians as are idealists, who maintain that there is nothing but ideas, or mind, or spirit (Metaphysics, par 2). The major schools of thought in relation with metaphysics are realism, idealism, materialism, determinism, and libertarianism.

Realism is an inclination toward literal truth and pragmatism. The representation of realism in art or literature of objects, as well as actions or social conditions as they actually are.

Realism, quite simply is the act of being real. One displays realism when actions are taken without idealization or presentation in abstract form. There are two types of realism: scientific realism and objective realism. Scientific realists embrace that the characteristic product of successful scientific research is knowledge of largely theory-independent phenomena and that such knowledge is possible (indeed actual) even in those cases in Mcbride 2 which the relevant phenomena are not, in any non-question-begging sense, observable (Stanford, par 1).

Objective realism is the scientific phrase for common sense.

One who knows their strengths and weaknesses, as well as having the power to refuse or negate an event or idea questionable to ones’ morals and values, possesses philosophical realism. Idealism is the act or practice of envisioning things in an ideal form. Ideals are the thoughts and conceptions of an event in its absolute perfection. In philosophy, it is the theory that the object of external perception, in itself or as perceived, consists of ideas opposite of naturalism. Plato is considered the first idealist philosopher, essentially because of his metaphysical doctrine of forms.

Plato considered the universal Idea or form; for example, redness or goodness–more real than a particular instance of the form–a red object, a good action. According to Plato, the world of changing experience is unreal, and the Idea or Form–which does not change and which can be known only by reason–constitutes true reality (Grolier, par 2). Materialism is the theory that physical matter is the only reality and that everything, including thought, feeling, mind, and determination, explained in terms of matter and physical phenomena.

Everything that actually exists is material, or physical. Many philosophers and scientists currently utilize the terms “material” and “physical” interchangeably. There are two classifications of materialists; eliminative and reductive. Reductive materialism is the view that only the material world is truly real and that all processes and realities observed in the universe are explained by reducing them down to their most basic scientific components, for example; atoms, molecules, and everything else thought to make up what we know as “matter”.

A reductive materialist views the miraculous and unexpected healing of a supposedly terminal cancer patient as a random coincidence of solely biological and physiological processes in the person’s body. While, on McBride 3 the other hand, some might view the healing as stemming from biological factors such as prayer or meditation. Eliminative materialism is the claim that one or another mental state invoked in commonsense psychology does not really exist.

Eliminativists suggest that the mental states in question are similar to phlogiston or caloric fluid, or perhaps to the gods of ancient religions. Most reductive and eliminative materialists agree that the theory of mathematical transformations just sketched is one of the most promising explanations of how our brains work (Churchland, Screen 1). Determinism defines in terms of underlying necessitation. However, the term determinism applies to views that have no direct connection to the concept of causation.

It seems preferable to define determinism with a broader sense. When an individual sets a goal and achieves that goal with a sense of urgency and skill, we consider the individual determined. In philosophy however, determinism is concerned with axiological issues for analyzing cause and effect and the individual’s freedom to choose. Other areas of study that involve determinism are linguistics, technological, media, and biological. Libertarianism is belief in liberty and the freedom to act as we wish without any external compulsion or control.

Libertarians strive for the best of all worlds; free, peaceful, and abundant world where each individual has the maximum opportunity to pursue his or her dreams and to realize their full potential. Libertarians believe that this combination of personal and economic liberty produces abundance, peace, harmony, creativity, order, and safety. Liberty is one of the central lessons of world history. Virtually all the progress the human race has enjoyed during the past few centuries is due to the increasing acceptance of the principles of libertarianism.

We are still far from a truly libertarian world. Libertarians believe humankind would see far more progress, abundance, and happiness if the ideas of McBride 4 liberty were fully accepted and allowed to work their miracles. That is yet to be witnessed however. Metaphysics is elementary as it is complicated, people will draw their own conclusions as it applies to their lifestyle. Ancient philosophers professed their knowledge to the world then, as their work is taught today in contemporary philosophy. The world of metaphysics is an open room with many doors of understanding and logic.

The more knowledgeable and optimistic we are about our world, the easier it will be to maintain peace and serenity in the world. McBride 5 Works Cited: “Academic Metaphysics”. Metaphysics: Multiple Meanings. (1996): 4 pars. 9 July 2003. The Stanford Encyclopedia of Philosophy. “Scientific Realism. ” 2002. Plato. “Idealism. ” The Grolier Encyclopedia. (1998): 5 pars. 9 July 2003. Churchland, P. M. (1981). “Eliminative materialism and the propositional attitudes. ” Journal of Philosophy. 67-90. “Libertarianism. ” Advocates for Self-Government. 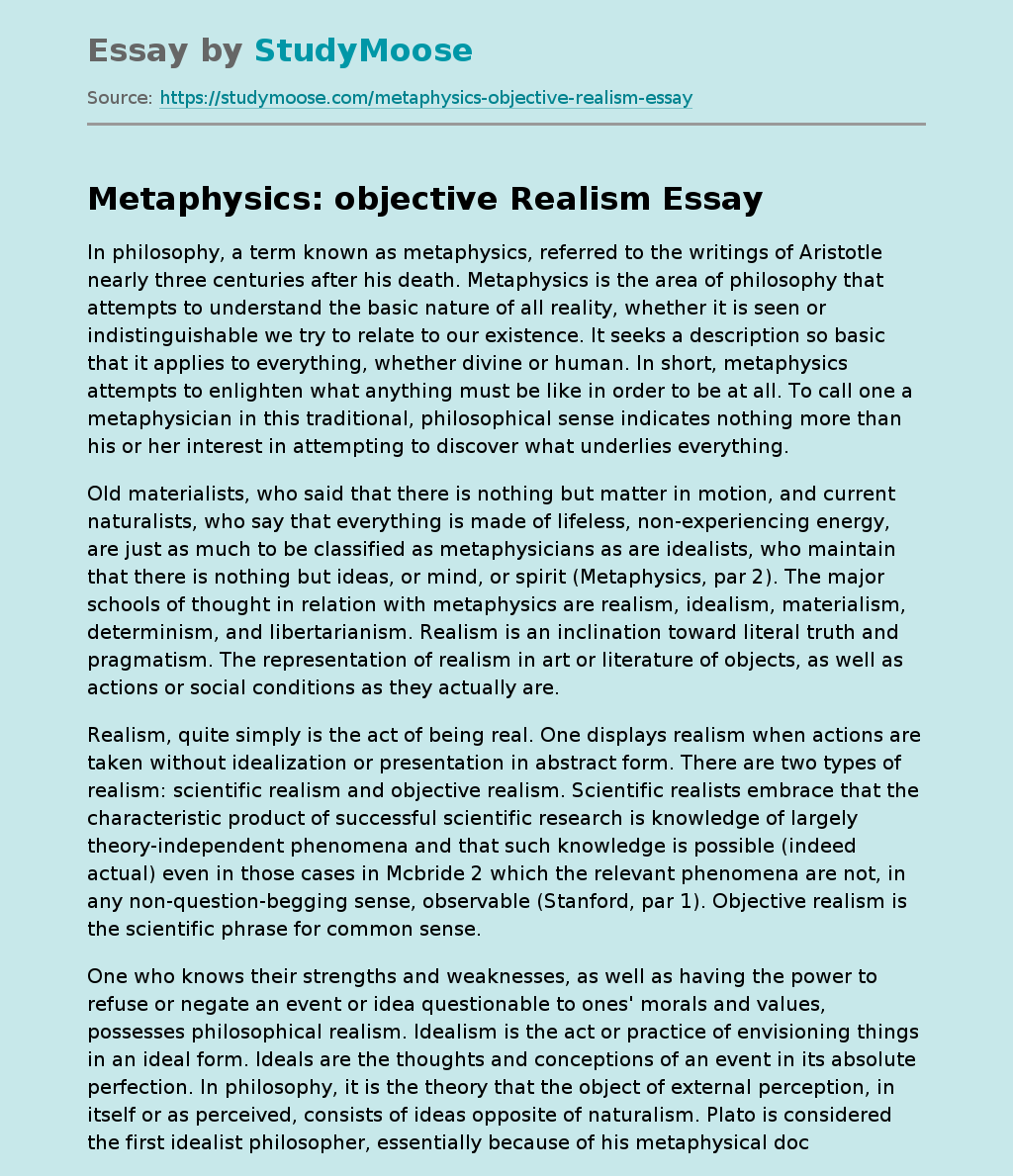