The narrator of a metafictional work will call attention to the writing process itself. The reader is never to forget that what she is reading is constructed–not natural, not “real.” She is never to get “lost” in the story.

intruding to comment on writing
involving his or herself with fictional characters
directly addressing the reader
openly questioning how narrative assumptions and conventions transform and filter reality, trying to ultimately prove that no singular truths or meanings exist

Authors of metafiction often violate narrative levels by: intruding to comment on writing; involving his or herself with fictional characters; directly addressing the reader; openly questioning how narrative assumptions and conventions transform and filter reality, trying to ultimately prove that no singular truths or meanings exist Metafiction also uses unconventional and experimental techniques by: rejecting conventional plot; refusing to attempt to become “real life”; subverting conventions to transform reality into a highly suspect concept; flaunting and exaggerating foundations of their instability; displaying reflexivity (the dimension present in all literary texts and also central to all literary analysis, a function which enables the reader to understand the processes by which he or she reads the world as a text).

It also poses questions about the relationship between fiction and reality by drawing attention to its characteristic as an artifact by itself.

No sense of reality in its entire spectrum as a genre even though the extremes of each end are minute acceptance and merely exploration of fictionality to the other end being utter denial of reality itself.

The author uses common names for the characters which allows him the versatility of putting them into different situations. Doing so supports the way the author puts much importance on what happens during the story instead of how it ends. John one of the most common boy names, has ranged from musicians (John Lennon), to leaders (John F Kennedy), to philosophers (John Locke) etc. This can emphasize the author’s use of putting the character into different contexts, changing the plot and how he plays different roles, yet emphasizes that it all ends the same (death). -Idea that the ending of a story is always the same, but only the middle matters In the story he is a loving husband, adulterous partner, womanizer Mary meaning of the name Mary is: Wished-for child; rebellion; bitter. Famous Bearers: the Virgin Mary; Mary Magdalene; Mary, Queen of Scots. Also shows how the author putes his characters in different situations. James -minor character

The author employs the use of place as setting in the story. Various examples of setting seen in the story are an apartment, as seen in story B, and a “charming house,” as seen in story A, C and As seen in the line, “Remember, this is Canada. You’ll still end up with A, though in between you may get a lustful brawling saga of passionate involvement, a chronicle of our times, sort of,” the setting of the story and each of its segments is a medium for what each character does before he reaches the end.

The setting of the story could have an influence on what one could do before he dies, the end which everyone eventually reaches. This is seen in the story wherein each segment (letters) had different bodies of story, yet everything “continues as in A” in which the characters live on with their lives then die.

D. Concepts: Ex: How do elements in the story help to create meaning? Like: setting, tone, imagery, symbol, irony, etc Metafiction in Happy Endings The author tackles the “What?” question in the writing process through his story Happy Endings. He goes through many scenarios but shows us that the conclusion to each scenario is the same. The question “What?” only leads to the ending of the story which we already know will be the same. The important things to ask rather are “How?” and “Why?”. These questions make up the middle of the story, the events that happen, the part that counts.

Is always changing depending on the situation given. Always has something to with the subject of love.

E. Title
“Happy Endings”
Most people usually focus on the ending of a story
Everyone wants a happy ending, but in reality we all meet an equal end which
is that we eventually die There is no such thing as a happy ending. All are the same in which we all eventually pass away. What matters is what is done as we reach the end.

F. Theme
What matters the most in the story is not the ending, but what what we do on the way there, because we can change our situations by choosing to act in the present, but not matter what you do you can’t change your inevitable end.

Margaret Atwood’s Happy Endings is an illustration of the idea that the ending of a story is always the same, but only the middle matters. And Love plays an important factor in all scenarios. SYNOPSIS: It includes six stories in one, each ending with death. The author believes that this is the only sure ending to anything. The stories are all inter-related, containing the same characters and similar actions. Behind the obvious meaning of these seemingly pointless stories lies a deeper and more profound meaning…. What is the common denominator between all these scenarios? 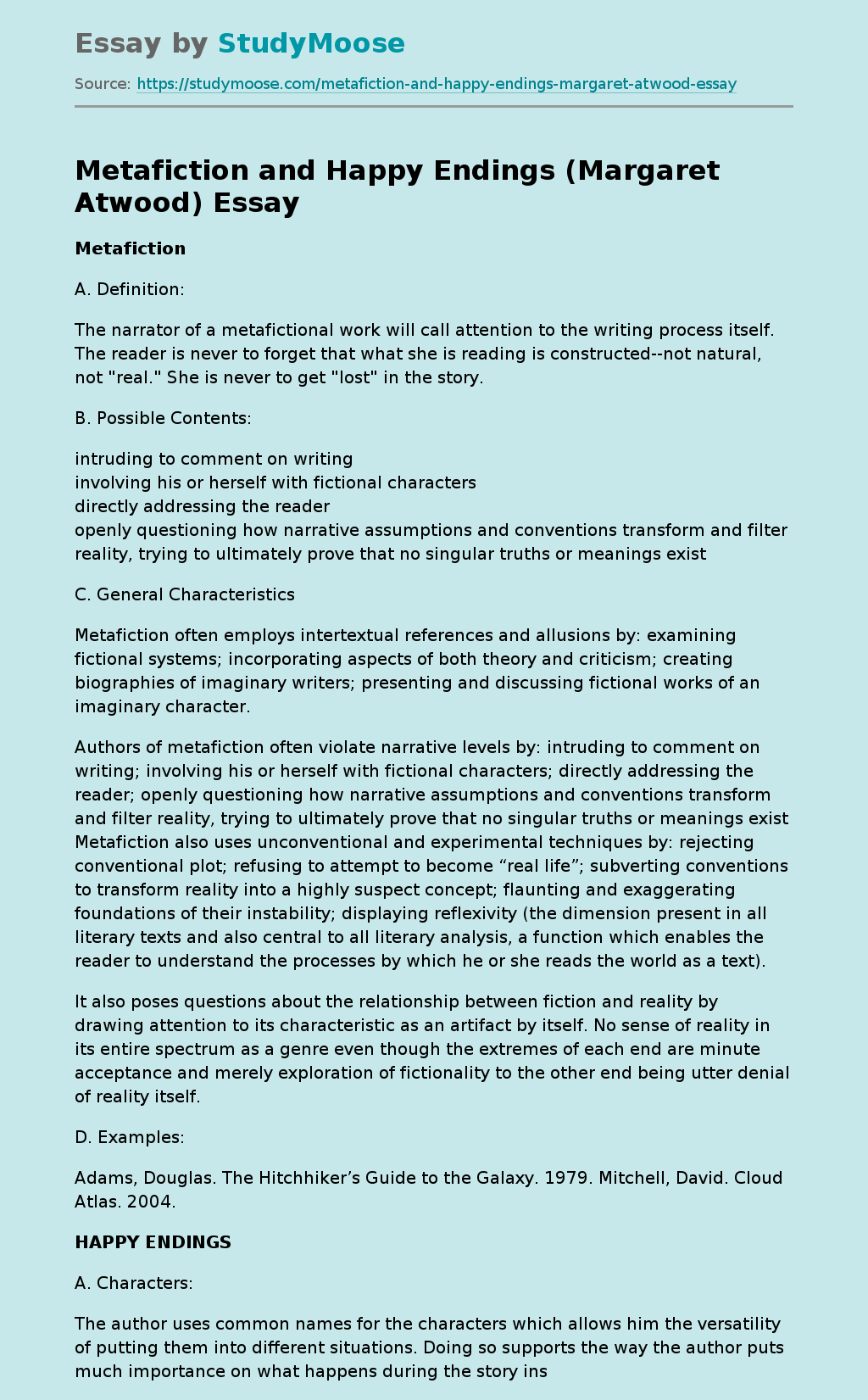