Chapter -I Introduction Merger, corporate combination of two or more independent business corporations into a single enterprise, usually the absorption of one or more firms by a dominant one. A merger may be accomplished by one firm purchasing the other’s assets with cash or its securities or by purchasing the other’s shares or stock or by issuing its stock to the other firm’s stockholders in exchange for their shares in the acquired firm (thus acquiring the other company’s assets and liabilities).

Don't use plagiarized sources.
Get Your Custom Essay on Merger and Acquisition – Proposal Just from $13,9/Page

In a merger, institutions combine to form another different institution, which becomes a legal entity in its own right and therefore mergers are not instant events, they are processes .A merger cannot be considered as truly successful unless it also achieves employee satisfaction.

Employee satisfaction is generally perceived as the scope of the work and all the positive attitudes regarding the work environment. In this, there are several words which have been describe the impact of merger in staff-

Thus Mergers have become a key part of many corporate growth strategies, with diversification being the primary reason for merging. Banks seek to diversify in order to reduce risks and increase returns, and geographic diversification, that is expanding operations into multiple locations, is used to obtain greater market power. Banks merge with other banks that have branch locations in multiple states in order to reach a larger customer base. The anticipated benefits are less competition and increased profits for the resultant bank. The corporate diversification strategy has led to an increase in bank Merger.

The mainly purpose to conduct this study on merger and acquisition of banks and its effect on employee job satisfaction because there has been seen a big change in shape of merger activities after the big financial crises that effects the whole world business strategies in different mode so many employees getting jobless. Every segment of work or business and individuals of the nation is affected by the financial crisis due to the cycle of collecting deposits and lending money chain broken.

Peoples do not have the power to save the money in the banks because of less profitability and more expenses that reduced the profitability of the banks too and let them to merge and acquisition themselves with another well-established bank that bear their costs and their existence too. During merger and acquisition activities lots of employees victimize in different terms. They suffer from the stiffed phase of their job. Most of the employee’s job satisfaction level goes ultimate down as they think they will be getting fired or jobless as new management would be come up with new teams of professionals and new procedure of working conditions in this way their morale level affected.

Statement of the Problem Whether the banks are public or private the main thing is the success of their business and that depends upon its employees. If the employees are not satisfied from their job, working conditions, work culture, management they can never make the customers satisfied with better quality services. The purpose of this research is to know the effects of Merger on employee satisfaction. Recently, Machhapuchhre Bank Limited merged with Standard Finance and Himchuli Bikas Bank merged with Birgunj Finance, I believe that these institutions are perfect to understand the effects of merger on employee’s satisfaction.

* To what extent does change impact on employee movement? * How satisfied are employees of these two banks with their current working environment? * What are the factors that affect employee satisfaction level during a merger phase?

Research Objective Based on the above identified problems, the goals of this study are * To identify factors that affect employee satisfaction during a merger phase. * To measure the satisfaction level of employee after merger of bank. * To establish the extent to which employees are satisfied with their current working conditions.

Chapter II Literature Review A number of researchers and theorists have been paying attention to know the satisfaction level of employee after merger of bank and institution. Many higher and further education institutions in South Africa are struggling to survive in a context of financial stringency, declining student enrolments and increasing competition, therefore for some of these institutions merging with other institutions in the near future is becoming a strong likelihood (Hay, Fourie & Hay, 2001:100).

In an attempt to survive, institutions are reducing costs by cutting down on the number of faculties, redeploying staff and placing a moratorium on overtime pay, conference attendance, new appointments and new capital projects (Bott, quoted by Hay, Fourie & Hay, 2001:100). Hay, Fourie and Hay (2001:100) state that perceptions of employees who will be directly affected by the merging process seem to be very important, as knowledge and understanding of those perceptions will empower decision– makers and ensure that effective management of the merging process can be accomplished; therefore careful consideration needs to be given to particularly personal factors, and employee fears will have to be addressed in the process to ensure effective merging.

According to Smit & Cronje (1995:307) when an organisation employs people, it is the manager’s task to diagnose the needs of its employees and formulate strategies to promote personal goal attainment. If workers are able to achieve their personal goals in the work situation, they will be prepared to render outputs that lead to the attainment of the organisation’s goal; therefore it follows that if the individual’s outputs are satisfactory, the organisation will reward him and this, in turn, will satisfy him. Strydom (2005) (as quoted in the Centre for Quality Management journal, S.a.), states that the level of satisfaction that a staff member feels will directly affect his work performance and attitudes, impacting on the company’s success.

Strydom (2005) believes that an organisation’s primary objective is to determine the needs of its employees and the ways in which these can be satisfied, therefore research emphasizes the importance of the role that employee satisfaction plays in the success of an organisation. Strydom (2005) further states that organisations need to provide good recruitment strategies and induction processes, strong leadership, personal development opportunities, a positive work environment, recognition of a job well done and good communication to ensure that employees’ needs are met. Phillips Consulting (2005) points out that tackling issues such as employee challenges, motivation, career advancement, performance management and cultural issues are key to the success of any transformation exercise. The employee drives the process and strategy, not the other way round.

Researchers have attributed the less than stellar record of M&A outcomes, in part, to how the integration of the participating firms affected the employees of the acquired company (Range, 2006; Schreyogg, 2006; Van Dick, Wagner, & Lemmer, 2004). Furthermore, research has shown that M&As can be a traumatic event in the lives of the individuals and organizations involved in the change. Many employees experience feelings of loss, resentment, and a decline in job satisfaction, and their reactions can lead to the failure of the M&A (Appelbaum et al., 2007; Cartwright & Schoenberg, 2006; Sperduto, 2007).

Appelbaum et al. concluded that such human resources (HR) difficulties may add costs to the integration process and undermine the ability of a firm to achieve synergy, and thereby offset the hoped-for benefits of merging. Hunt and Downing (2006) concluded that, in the majority of successful mergers, the purchasers predicted that personnel problems would arise and acted quickly when such problems surfaced. Thus, understanding the job facets that lead to positive job satisfaction may help other business leaders deploy strategies that could increase their chances for achieving successful mergers. 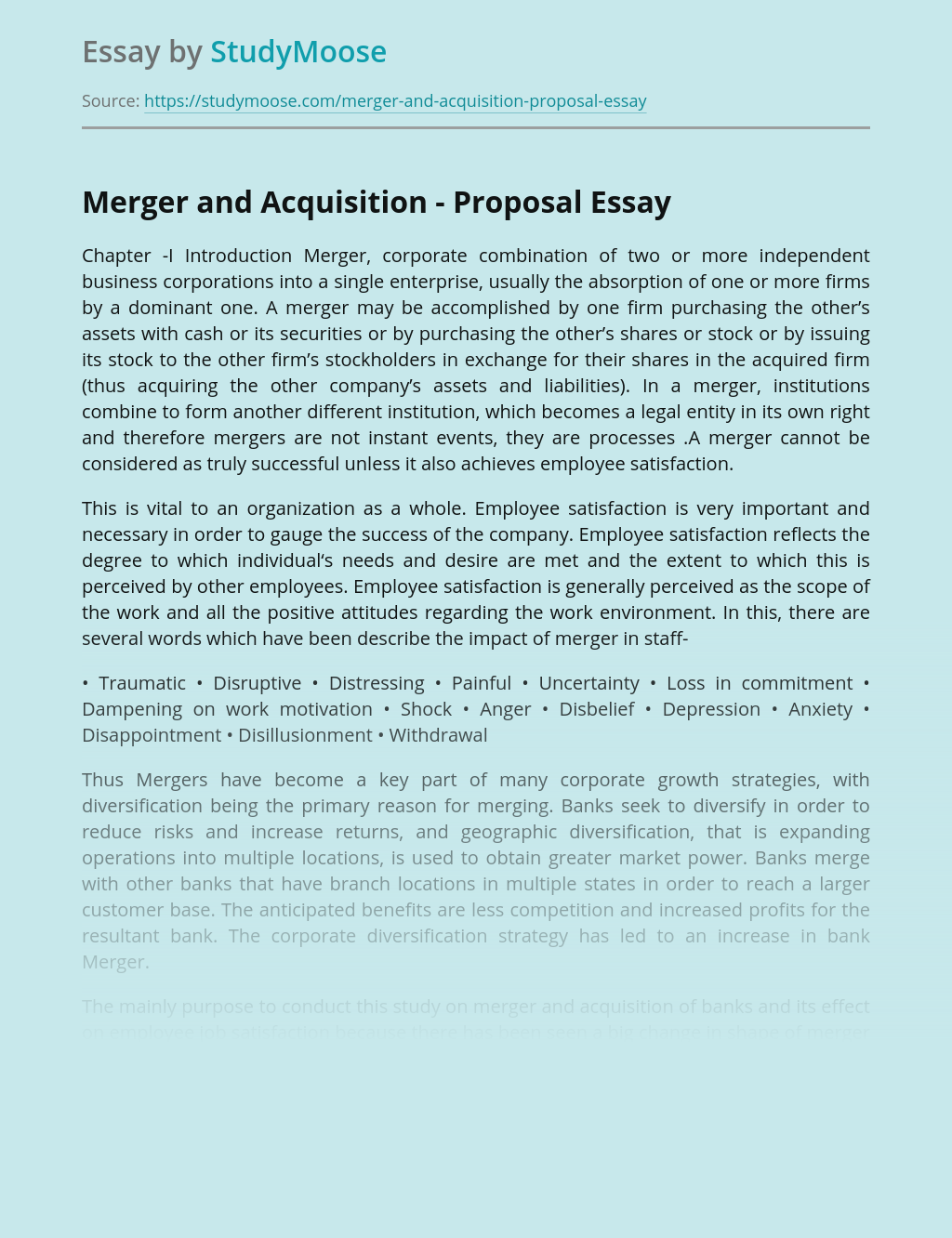 The purpose of this word summary is to be in the place of three employees at Riordan Manufacturing. These three employees have recently taken various self-assessments to help the manager in managing the teams. The summary will discuss the ways in which these three employees’ characteristics affect the performance of the organization and make recommendations... VIEW ESSAY

View sample
Benefits that are important to employees: A review of employee benefit programs

When employees look for employment compensation is important. However, employee benefits programs can be the deciding factor when it comes down to decision making; accept or decline a job offer. Having a “good benefits package” is the most desired attributes in an employer and it attracts human talent (Conlin, 2008). Even the decision to stay... VIEW ESSAY