Shakespeare’s style and language are very unique, elegant, and are quite complicated to understand for readers nowadays. Even though it is quite tricky, people nowadays are still interested in all of Shakespeare’s plays. Shakespeare didn’t write his plays in a particular way to make it difficult or to be clever. Like every writer, he writes so that people can enjoy his stories. He created a particular style to try to make his stories more enjoyable. This is the same as a lot of modern day TV serials and films.

Don't use plagiarized sources. Get your custom essay on
“ Merchant of Venice – Shakespeare’s Style ”
Get custom paper
NEW! smart matching with writer

For instance, Quentin Tarantino makes his films in a stylized way. Some people don’t like his films because they are not used to his style, while others call him a genius. The same is true with Shakespeare as well.

The Christian characters certainly view the matter this way. Merchants like Antonio lend money free of interest and put themselves at risk for those they love, whereas Shylock agonizes over the loss of his money and is reported to run through the streets crying, “O, my ducats! O, my daughter!” With these words, he apparently values his money at least as much as his daughter, suggesting that his greed outweighs his love. However, upon closer inspection, this supposed difference between Christians and Jews breaks down.

When we see Shylock in Act III, scene 1, he seems more hurt by the fact that his daughter sold a ring that was given to him by his dead wife before they were married than he is by the loss of the ring’s monetary value.

Some human relationships do indeed matter to Shylock more than money. Moreover, his insistence that he has a pound of flesh rather than any amount of money shows that his resentment is much stronger than his greed. Some of the universal and timeless elements in this are that people those days and nowadays do loan money. Moreover, it’s almost the same thing; Christians value human relationships over the business ones whereas Jews are only interested in the money. Jews even these days are still considered as more business minded people compared to Christians.

The settings for The Merchant of Venice play were basically just Venice and Belmont, a residence just outside of the city. Venice is still a major tourist attraction. The Rialto Bridge is still quite very famous. It is believed by most people that Venice and its attractions got even more popular after this play was published. Most of Venice’s customs and cultures haven’t changed, however, some have. For example, people nowadays in Venice don’t exactly marry who their parents tell them to. They have free choice now, unlike Portia.

Shakespeare made this play so successful with no special effects. For example:

He developed his style, like all creative people (painters, authors, builders, etc…) So, Shakespeare’s style can be broken down into three basic sections: structure, language, and imagery- no fuss, no magic. It’s not rocket science to be very complicated. 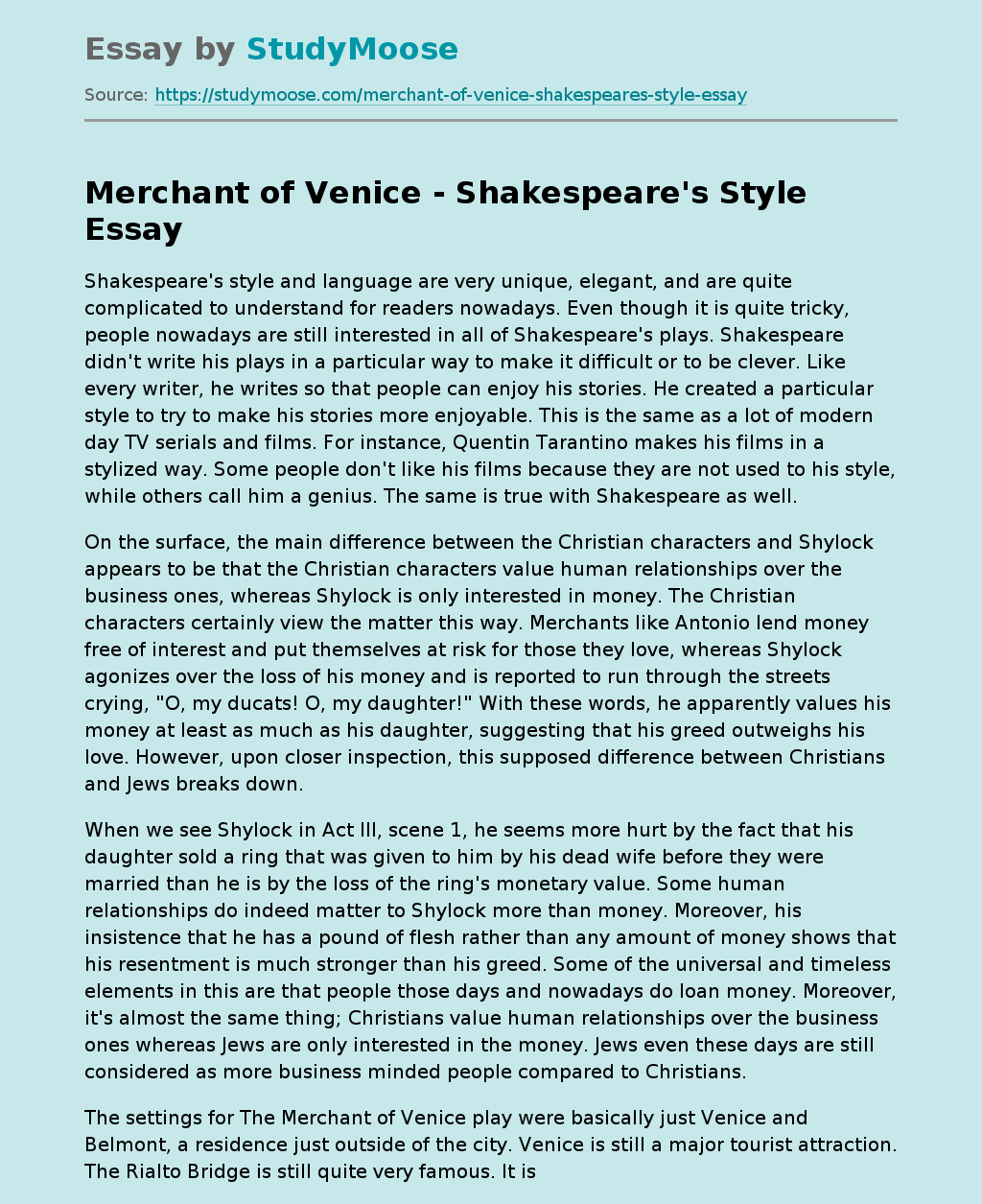