Mental Health and Control of People in Macbeth

Although people have the control of their mind and their actions, it is through the outside influencers, which gives it potential to do the unthinkable things. Macbeth action was caused by the influence of the witches and Lady Macbeth that made him do the unimaginable. Macbeth was influenced by his surroundings and due to his mental condition, he could not realize the consequences for his action. Therefore, Macbeth is considered not guilty.

To begin with, the witches told Macbeth his prophecy telling he would be king and have the power.

Don't use plagiarized sources. Get your custom essay on
“ Mental Health and Control of People in Macbeth ”
Get custom paper
NEW! smart matching with writer

The witches shape Macbeth by changing his behaviors and his state of mind. In Source 2 it states ”…individuals have great power to shape how others behave/ but it can also lead to terrible things” (Page 5). For instance the witches predict Macbeth prophecy and influenced him in his accomplishment of having power and becoming king. He realized the supernatural of the witches and their ability. In source 3 it stated “…you’re surrounded by evil, mean people whose job it is to get good kids to do bad things…”(Page 3).

The ambition of having power of Lady Macbeth influenced him to take action and took advantage of his innocence. She convinced him that he can be king and have all the power. In spite of this, Macbeth would not have killed Ducan if the witches hadn’t told him his prophecy and Lady Macbeth influencing him.

In addition, his mental condition made him do things without thinking of any consequences. He was paranoid at the fact that everybody was against him and that made things worse.

In Source 1 it explained when a person has PTSD “You may think the world is completely dangerous, and no one can be trusted” (Page 2). Macbeth was paranoid when he killed Ducan. He was forced to commit more and more to protect himself from enmity and suspicion. Macbeth killed Ducan due to the fact that he was in fear that Banquo is a threat and knew exactly what the witches said. In Source 1 it stated “PTSD-many of which are not under that person’s control./is a mental health problem that some people develop after experiencing or witnessing a life-threatening event” (page 1). Macbeth hallucinations affect his mental stability. After he kills Ducan he starts to see him and that makes him freak out and go out of mind. Mental conditions are a big part of why people do things. During Macbeth’s condition he had no idea the consequence of his action.

On the other hand, some critics may argue that what people and their action is on them and no one else. Macbeth had the chance to decide whether to kill Duacn or not. In Source 3 it expresses “she became responsible because she knew he was entering and a toxic environment inconsistent with human life” (Page 5). Killing Ducan was his choice and he knew the trouble he was getting himself into. Macbeth’s ambition and having power was selfish and he could have avoided all of that. Although this might be true, Macbeth is innocent because of his surroundings and his conditions he was in is what caused his action in the first place. Therefore, Macebeth would have controlled his thoughts and his action, but he was forced to do things that changed his mind and did things he couldn’t control because of manipulation.

In conclusion, Macbeth is innocent due to the fact of his surroundings and the internal conflict of himself. Lady Macbeth took advantage of his innocence to manipulate into killing Ducan and the witches brainwashed him into killing. His illness had a big part in it because he didn’t know what he was thinking and the aftermess of all of it. After all of it the consequences would not have been on Macbeth if it wasn’t for his surroundings.

Mental Health and Control of People in Macbeth. (2021, Oct 14). Retrieved from http://studymoose.com/mental-health-and-control-of-people-in-macbeth-essay 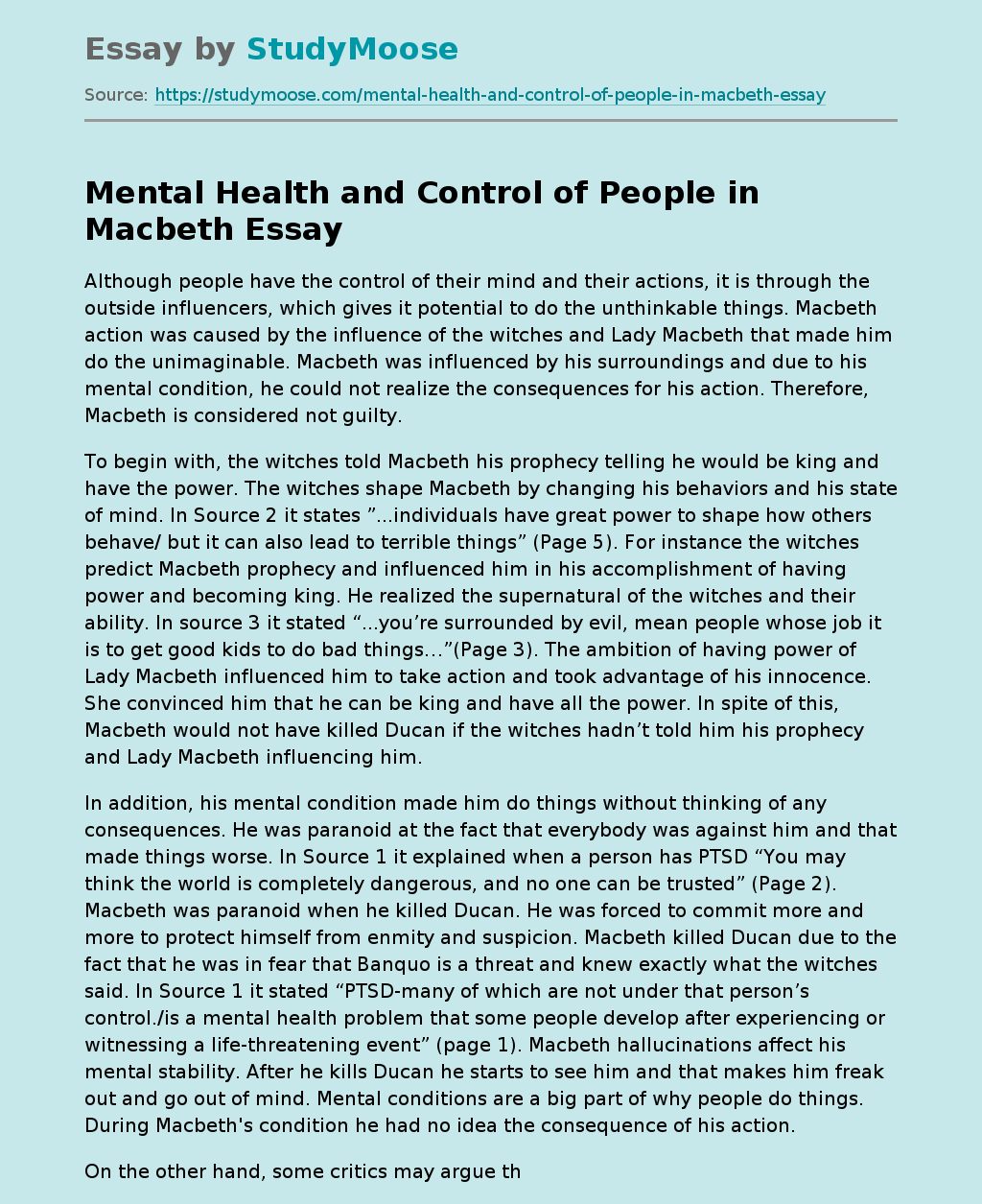