The poem “Disabled” is taken from Wilfred Owen’s collection of poetry referred to as Trench Poet. It was written in 1917 and tells the story of a soldier who lost his limbs in battle leaving him utterly helpless. It aims to crush the glorified image of war present in the minds of the public.

The messages and content present in the poem heavily resemble that of other poems from the collection such as; “The Send-Off”, which also uses contrast to show that there is little pride to be found in war.

Don't use plagiarized sources. Get your custom essay on
“ “Mental Cases” by Wilfred Owen ”
Get custom paper
NEW! smart matching with writer

In “The Send-Off” men are riding away to an unknown place on a train. Contrast can be found in line three when it says “and lined the train with faces grimly gray.” The contrast in the poem, though different from “Disabled” is still used to create a somber tone.

It is meant to tell the reader that although war can seem exciting there is always the knowledge in the back of the soldiers’ minds that they may die the next day.

In the poem being analysed “Disabled” one can see a lot of contrast between the character’s past and present. Once again, although the contrast is shown differently, with respect to the context, it has the same purpose. Looking at the past in comparison to the present shows that the soldier not only did not find glory but rather lost it when he “threw away his limbs, “(line 10.)

Taking a closer look at “Disabled”, one of the things that stands out the most is the switch in tone in lines 15-20.

Before those lines the character describes his past full of lights and gayeties. He comes back from war without his limbs, which were blown off in war, and utterly unwanted. He is ignored by the ladies who look at healthier men and is even forgotten by his caretaker. The main idea is to compare how he was treated before the war and how he was treated after. One would expect the soldier to come to loving arms and grateful cries. However, “only a solemn man (who) brought him fruits/ Thanked him; and then enquired about his soul.”

The strong contrast and impactful metaphors illustrate the change in the character’s attitude as people treat him differently. This demonstrates the principle idea, to the public, that war is not filled with glory.

In the first stanza has many gloomy or rather dark words. Words such as “dark” and “grey” set the mood of sobriety. Line four almost presents a paradox as it says “voices of boys saddening like a hymn.” There are various ways to interpret this line. Hymns can be sung at both happy and sad masses. One way to interpret this quote would be to say that Owen presents a paradox as the boys are singing happily but to him it sounds like a funeral hymn.

The purpose of this would be to show the envy that the character feels towards the able bodied boys with futures still in tact. The fact that they are singing gleefully brings forth resentment within him and makes the song sound similar to a funeral hymn. Another way to interpret this would be to say that the boys were indeed singing solemn tunes. This could mean that they are sad to be heading home. This could also spurt resentment or envy from the disabled man as he is, “shiver(ing) in his ghastly suit of grey,” (line 2.) The last line of the stanza “Till gathering sleep had mothered them from him,” almost antagonizes the main character as he is someone that children are taken away from. He is sad that the children must leave because his window of living vicariously through them is temporarily shut.

The second stanza entirely switches moods. Words that were used in the primary stanza such as “dark” and “grey” now heavily contrast with words used in the second such as “gay” and “lovelier.” It illustrates what the past was like for him before the war. The “Town used to swing so gay,” (line 7.) The contrast between the two stanzas sets up the differences that are later elaborated on between his old and present self. Line 10, “before he threw away his knees,” serves as a paradox. One cannot throw away his knees. The word could have been chosen to represent the bitterness the soldier feels at his decision to join the war. It also could represent the aggression with which he was torn apart.

The third stanza is really the central basis of imagery and metaphors in the poem. It talks about a painter that was once interested in painting him because he appeared so young for his age but then later would not be interested as the character has “lost all of his colour.” The metaphor of his colour pouring out “very far from here,” (line 17) tells the reader what happened to the character. The colour in this example could be interpreted differently. It could be interpreted as his literal blood. The literal colour in his cheeks and his body was lost in the explosion miles away from where he rests. It could also be taken to symbolize his spunk. His personality and emotions were partially lost in the incident. This once again creates a contrast which demonstrates that war has made him lose many things but gain very little.

Stanza four is stocked with comparison. Lines 21-29 explain his reasons for joining the war. The beginning recounts a time when he won a football match and was praised. He drank a pint of beer and signed up. This shows how eager he was to go to war he even “lied” about his age. The interpretation that could be taken was that he was looking for more glory. He got a taste from his football math, “carried shoulder high,” (23.) It even talks about pleasing a girl named “Meg.” Basically, he wanted to prove himself. He wanted to come back an honoured man.

The deception of war is later expressed in stanza five when it states that he though mostly of “smart salutes/ and care of arms,” (lines 32 and 33.) He did not think about the enemy or the danger. He simply thought about the glory and romanticism of going to war. He was drafted out “with drums and cheers.”

The last line of the 5th stanza really creates a contrast with the final when it states that his return is met with much less than when he scored in football. Not only was he more praised when leaving to war. He was more praised when he won a sports match. He fought for his life for who knows how long. He lost his limbs on the way but the only person who celebrated him was a “solemn man who brought him fruits.”

In conclusion, Owen is highly successful in delivering the message that war is not filled with glory in his poem “Disabled” through contrast and metaphors. The poem was very impactful for me as it really expressed the sorrow and the desolation that the man who sacrificed everything for my country felt. I am an American. As an American it makes me sad to see such sacrifice met with such little response. 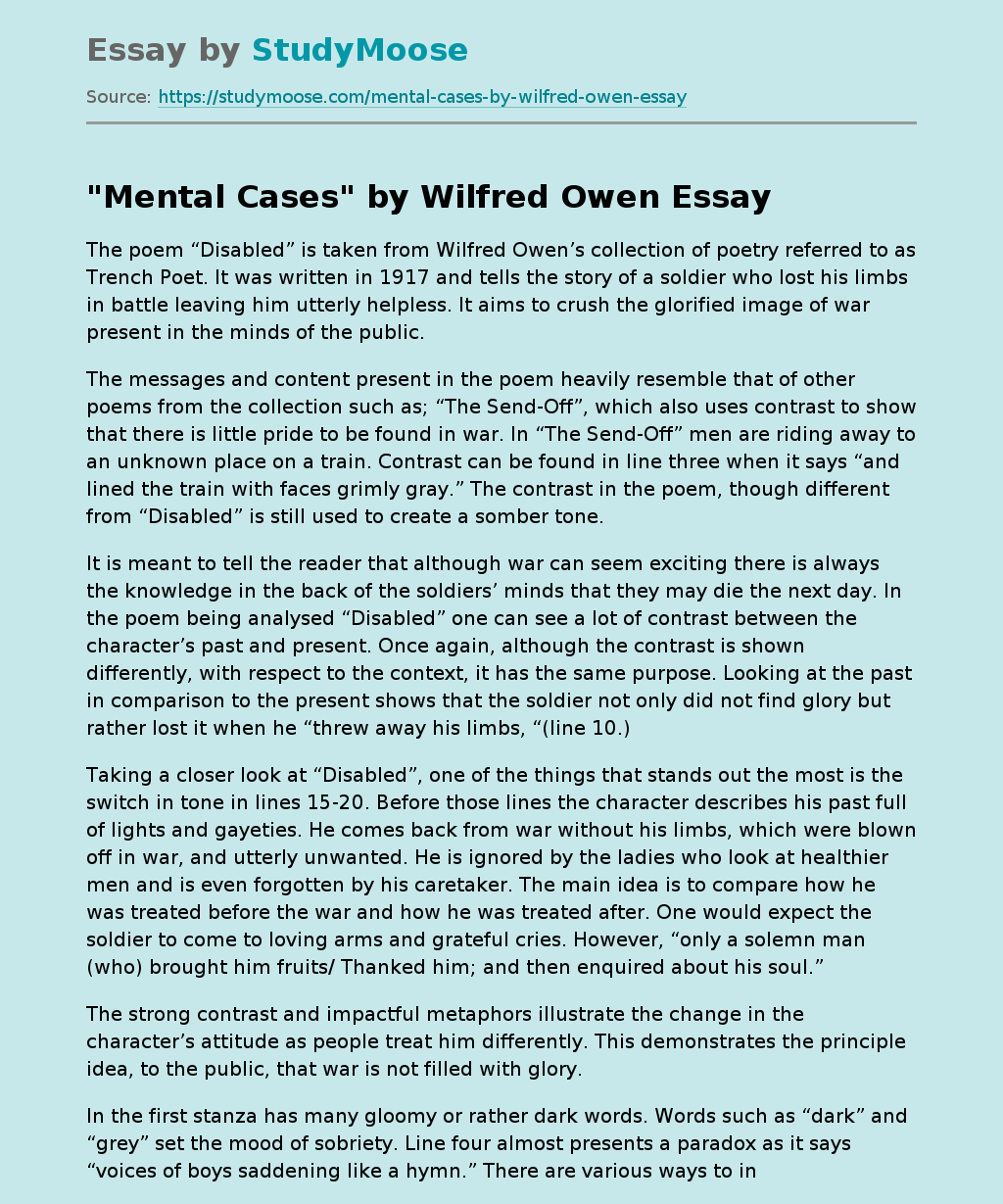